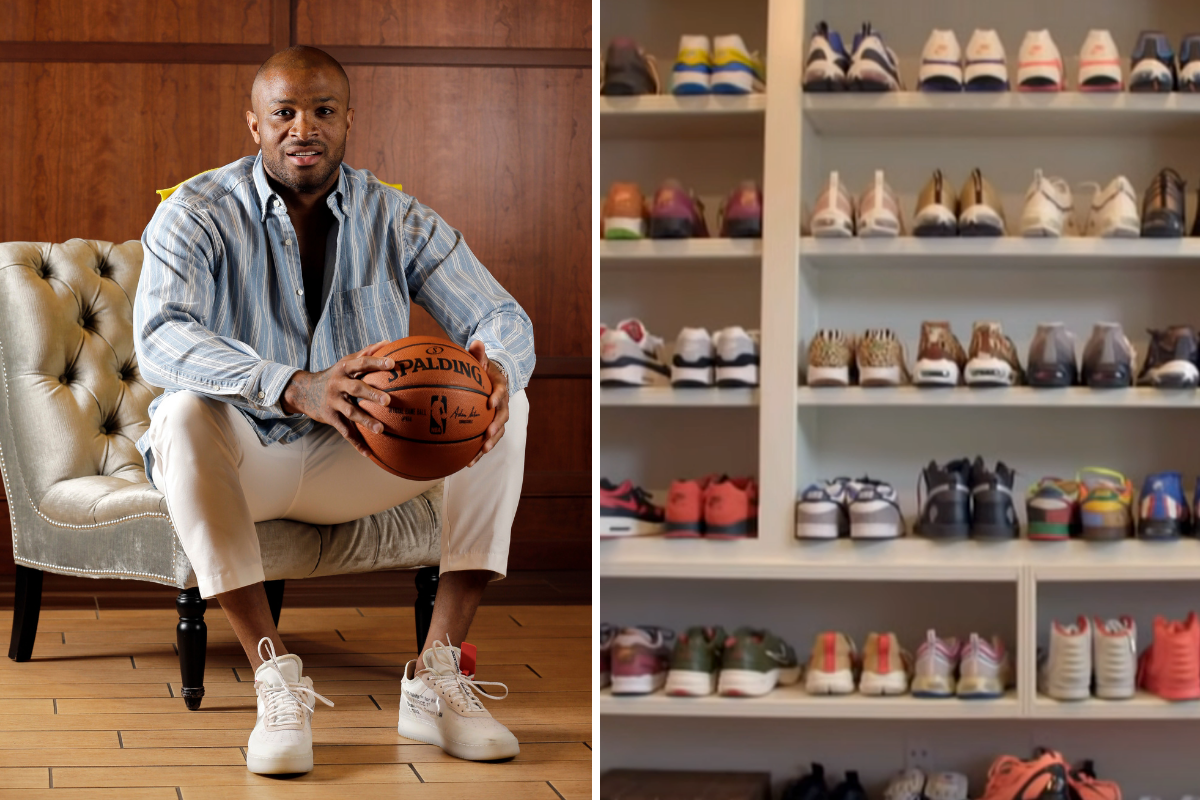 “It’s gotta be the shoes,” exclaims Mars Blackmon. It was the only explanation for Michael Jordan’s success. Though, he would tell you differently.

For Milwaukee Bucks forward P.J. Tucker, shoes don’t directly attribute to his brick-wall, tough, corner-three shooting style of play. He fine-tuned those skills on his own.

Shoes are something more. They’re an extension of his identity.

RELATED: Giannis Antetokounmpo?s Net Worth: The Greek Freak Has a Freaky Fortune

P.J. Tucker is the resident sneakerhead of NBA players. It’s a title he doesn’t take lightly. Ever since he was a little kid, he’s had an obsessive fascination with kicks.

Throughout the NBA season, the former Houston Rockets forward claims he has a few thousand pairs of sneakers in his shoe collection at a time. The small-ball center, who’s built like an NFL linebacker, carries a travel-shoe bag designated for an entire team when he hits the road. It’s capable of holding 16 pairs. For one road trip.

Tucker will change footwear multiple times in a game just to mix it up, too, featuring everything from Nike Kobe 4 Protros, Nike Zoom Kobe 6s, Hyperdunks, off-white Air Jordan 4s, Air Jordan 5s, and Travis Scott’s Jordan Brand Cactus Jacks. He’s a hunter of rare models, even finding a pair of friend Kevin Durant‘s signature shoe in a coveted colorway that the Brooklyn Nets forward doesn’t own himself.

During the coronavirus pandemic and COVID-19 outbreak last year, Tucker doubled down on his shopping. He spent his free time scrounging social media and eBay for designs he hadn’t found yet, averaging 3-4 hours of search time per day.

Once he entered the NBA Bubble on the Disney campus in Orlando, the trend continued with a few particular pairs at the top of his list. According to ESPN, they included the Nike Air Max CW (Chris Webber’s own signature shoe), the Nike Vis Zoom Uptempo (a pair P.J. had in high school), the Nike Zoom Flightposite 1 TB, and the holy grail, the Nike Air Max 1 “Parra” Amsterdam.

Tucker has worked with Nike basketball to create his own “Journey Pack” and track down some retro pairs of Kobe Bryant’s signature shoe. Players on Team USA have followed Tucker’s affinity for colorful designs by wearing red, white, and blue inspired sneakers for the first time leading up to the Tokyo Olympics.

The Bucks have made their way through the NBA playoffs to earn a spot in the NBA Finals against the Phoenix Suns. The Suns took down defending champ LeBron James and the Los Angeles Lakers in the first round, the Denver Nuggets in the second round, and Kawhi Leonard and the Los Angeles Clippers in the Western Conference Finals.

Milwaukee swept the Miami Heat before coming back to take down KD, James Harden and the Kyrie Irving-less Brooklyn Nets. They beat the red-hot Atlanta Hawks in the Eastern Conference Finals. Despite a knee injury, two-time MVP Giannis Antetokounmpo has been fantastic. Tucker’s shoe game has also been fantastic. The forward sported a pair of $50K Nike MAGs prior to Game 2 of the Finals.

No matter if he’s at the All-Star Game, Slam Dunk Contest, or playing the Toronto Raptors, New York Knicks, Atlanta Hawks or Minnesota Timberwolves, Tucker’s sneakers will be the freshest in the gym.

The sneaker king can outwrestle bears for rebounds, and if he has a bad game, he can pick another one of his myriad pairs of shoes to shake the bad juju. He’d probably change them anyway.