Just days after his grandmother and girlfriend died within hours of each other, the senior linebacker marched his team into East Lansing to face the Michigan State Spartans.

There was only one problem: Manti Te'o's girlfriend was not real. And now, Netflix brings new light to the entire fiasco in a two-part documentary. 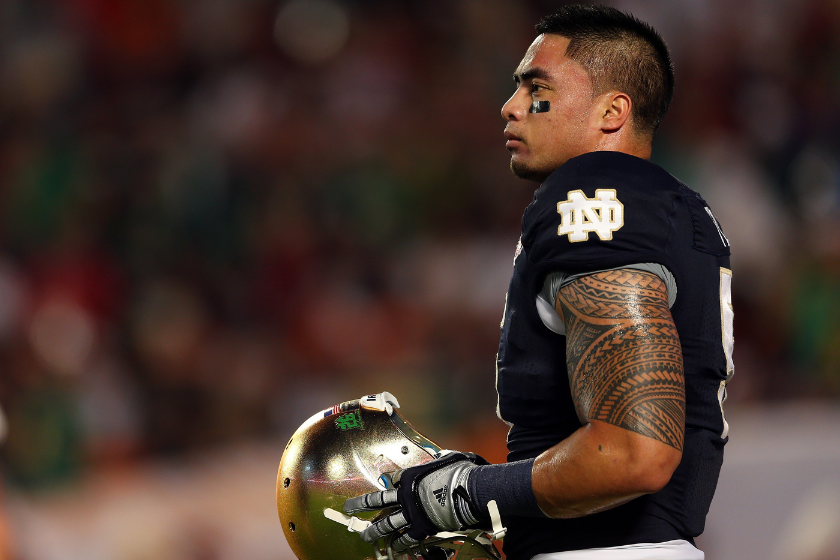 Rated as the No. 4 recruit nationally by 247Sports and America's top-ranked linebacker, Te'o became an impact player from the jump, starting 10 of 12 games as a true freshman.

Punahou High School's finest started every single game over his next three seasons and bookended his career with one of the most decorated college football seasons ever by a linebacker.

As a senior team captain in 2012, the Notre Dame star logged 113 tackles, seven interceptions and 1.5 sacks.

The Unanimous All-American became the only defensive player to win the Maxwell Award as CFB's best player. He swept every national award, including the Lott Trophy, Chuck Bednarik Award, Walter Camp Award, Bronko Nagurski Trophy -- the list goes on.

On December 6, 2012, one month before that title game, Te'o received a phone call. It was Lennay Kekua, Te'o's dead girlfriend.

What the hell was going on? 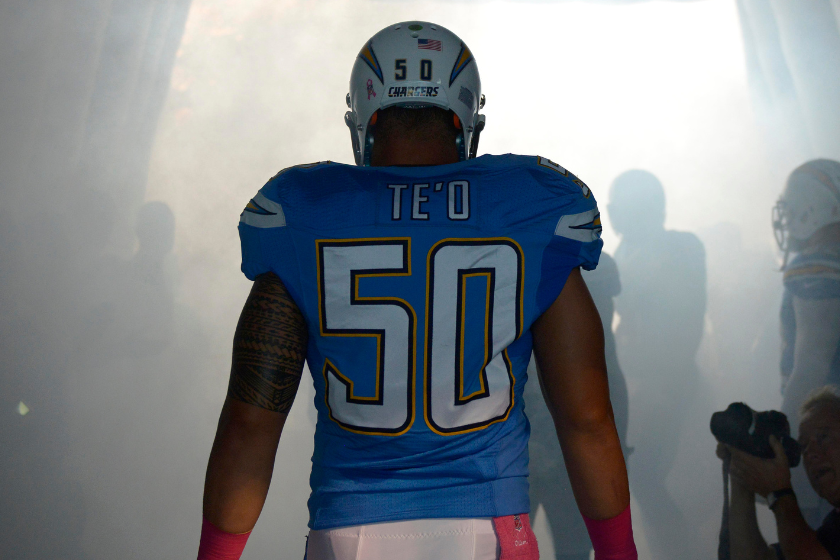 During the winter of his freshman season, Te'o was contacted on Facebook by a "woman" named Lennay Kekua. Te'o was skeptical, asking friends who'd also been in contact with her online if she was real.

Despite his concerns, Te'o and Kekua graduated from online messages to talking "solely by phone" in April 2010, according to ABC News' timeline.

Te'o and Kekua spoke often, until October 2011 when she mentioned troubles with her current boyfriend. This is where their relationship apparently gained steam and became "official."

Keep in mind that they've still never met. Te'o said later that all of his Skype and FaceTime attempts revealed a "black box" rather than a person on the other end. Regardless, he told Sports Illustrated Kekua was his girlfriend later that year.

Despite the hurdles of modern love, the relationship powered forward. Several attempts at in-person meetings in Los Angeles and Hawaii failed because Kekua either bailed or someone else (an alleged sister or cousin) showed up in her place.

After months of grieving and national media following Kekua's death which was attributed to leukemia after a car accident, Te'o struggled in search of the truth. Te'o told ESPN that he finally notified parents upon hearing from her again, then turned to head coach Brian Kelly.

The school launched an investigation and called a press conference to clear Te'o's name, but the damage was already done. The catfish story had already been reported by nearly every major news outlet, from CBS to the Associated Press to the New York Times.

He later reiterated that the mysterious re-appearance of Lennay Kekua had no impact on his play.

In 2022, Netflix released "Untold: The Girlfriend Who Didn't Exist," a two-part documentary focusing on Manti Te'o and the events that transpired that in order to bring the catfishing hoax to light. The Netflix documentary, who has been hyped by former Deadpsin writers Timothy Burke and Jack Dickey, who uncovered the hoax back in 2013.

Who Was Te'o's Mysterious Girlfriend?

On January 16, 2013, Ronaiah Tuiasosopo, who know goes by Naya Tuiasosopo, was revealed to Te'o as the mastermind behind the elaborate prank. The same day Te'o learned of the three-person team who'd invented this fake girlfriend, then dragged out the story for years, Deadspin published its report on the wild series of events.

Among Deadspin's reporting was a shocking claim: According to "a friend of Ronaiah Tuiasosopo," they were "80 percent sure" Te'o was in on the catfish hoax in search of publicity.

Deadspin cited multiple instances in which Tuiasosopo and Te'o exchanged public messages -- they have since been deleted -- through their Twitter accounts. They definitely knew each other, and they even met for photos at the Notre Dame-USC game in Los Angeles in November 2012.

Te'o told ESPN's Jeremy Schaap that he knew having an online girlfriend wouldn't be received well, so he "tailored my stories to have people think that, yeah, he met [Kekua] before she passed away."

Tuiasosopo confessed to Dr. Phil McGraw that he'd fallen in love with Te'o, and the star linebacker had no knowledge of his plot to hide behind Lennay Kekua's identity. Notre Dame Athletic Director Jack Swarbrick and people in Te'o's corner reaffirmed he didn't know about the scam, and that he was a simply the victim.

The embarrassed football star released the following statement, per ESPN:

"This is incredibly embarrassing to talk about, but over an extended period of time, I developed an emotional relationship with a woman I met online. We maintained what I thought to be an authentic relationship by communicating frequently online and on the phone, and I grew to care deeply about her.

"To realize that I was the victim of what was apparently someone's sick joke and constant lies was, and is, painful and humiliating.

"It further pains me that the grief I felt and the sympathies expressed to me at the time of my grandmother's death in September were in any way deepened by what I believed to be another significant loss in my life. I am enormously grateful for the support of my family, friends and Notre Dame fans throughout this year. To think that I shared with them my happiness about my relationship and details that I thought to be true about her just makes me sick. I hope that people can understand how trying and confusing this whole experience has been. In retrospect, I obviously should have been much more cautious. If anything good comes of this, I hope it is that others will be far more guarded when they engage with people online than I was.

"Fortunately, I have many wonderful things in my life, and I'm looking forward to putting this painful experience behind me as I focus on preparing for the NFL Draft."

Since the Catfish Scandal, Te'o's Life Has Changed

A disappointing performance at the NFL Scouting Combine dropped Te'o out of the first round of the 2013 NFL Draft. The San Diego Chargers selected him as a second-round pick at No. 38 overall, but his NFL career hasn't been one of note.

Numerous lower body injuries to his feet, ankles and a torn Achilles in 2016 limited Te'o to 34 starts in his first four seasons. He signed with the New Orleans Saints in 2017, playing all 16 games and recording 62 total tackles.

However, Te'o played only five games in 2018, missing time as a "healthy inactive" before his contract expired.

In August 2020, Te'o got married to personal trainer Jovi Nicole.

NFL linebacker Manti Te'o has officially tied the knot. He got married to personal trainer Jovi Nicole Engbino on August 29, 2020 in an intimate beach ceremony in La Jolla, California, near San Diego.

The happy couple have been linked together since 2016, according to The New York Post, and got engaged just before the coronavirus pandemic and COVID-19.

"I couldn't give you the world but I think I did better...I gave you my last name and it looks good on you Mrs. Te'o," he wrote on Instagram.

"Yesterday I got to marry my best friend and the love of my life in an intimate beach ceremony," she added on social media. "Although this was not how we envisioned our ceremony, it was perfect. We will be having our reception and celebration when Temples and venues open back up so we can share this special occasion with our families and I couldn't be more excited."

The happy couple welcomed a baby girl in August 2021.

Te'o's career is unfortunately defined by an elaborate and insane hoax. It should be defined by a hard-working student and one hell of a football player. This is a lesson in online relationships, intimate or not, and how dangerous the Internet can really be.

Luckily, he was able to find true love and move on.

This post was originally published on May 22, 2020 before updating.