In the SEC, it just means more. In the Big Ten, you dream big. In South Bend, Indiana, Notre Dame does whatever the hell it wants.

For 135 years, the Notre Dame Fighting Irish have lived independently in the college football world. They left home as soon as they turned 18 and never looked back, never phoned home for guidance and never asked for an extra buck. Now, however, the Irish are on the phone ready to dial. The truth is, though, they won't have to. Their phone will be ringing nonstop.

Love them or hate them, the Golden Domers are God's football team, which makes them college football's biggest brand. Joining a conference means forging historic rivalries and signing massive TV contracts. But, Notre Dame has an archrival on the other side of the country and they're the only college team that plays on NBC. They aren't in a conference because they don't have to be, and it's given them the wiggle room to do as they please.

Times are changing, though. With the news of USC and UCLA leaving the Pac-12 to join the Big Ten, we're officially heading towards two mega conferences. What does that mean for Notre Dame? Their path to the College Football Playoff just got a lot harder unless they join the party. 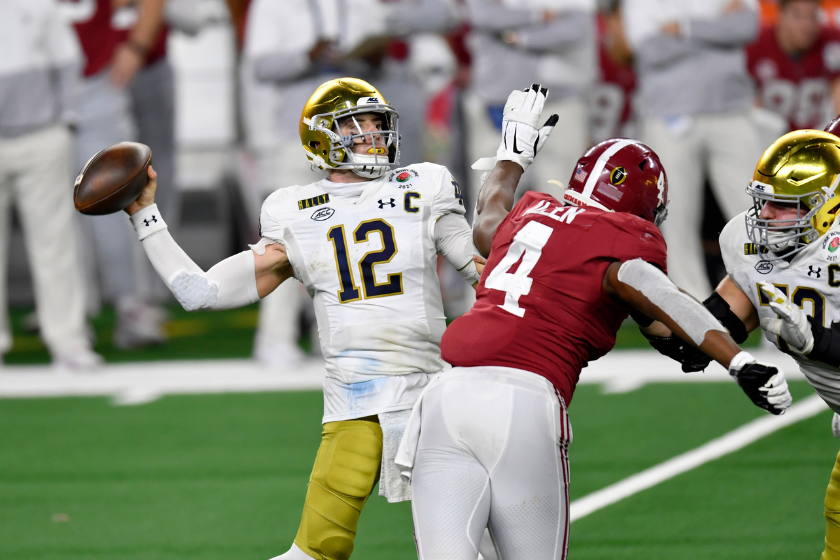 The addition of USC and UCLA to the Big Ten puts the conference at 16 members. While the SEC will be sitting at 16 when Oklahoma and Texas join, they'll both inevitably add more. The SEC is already rumored to be targeting Clemson, Florida State and Miami. It probably won't end there, either. Conference realignment is a revolving door these days.

Bigger conferences mean more conference games. There are reports the Big Ten will move to 10 once the Trojans and Bruins join. The SEC will probably follow suit, although it'll be a dark day in college football when we're robbed of the historic Alabama and Southern Mississippi A&M Tech School for the Blind matchup in late November. For Notre Dame, that makes scheduling difficult.

Currently, Notre Dame is required to play five ACC opponents each year because they're a conference member in every sport except football. They also have annual matchups against USC, Stanford and Navy. The rest of their schedule is rounded out accordingly. This year, they're playing Ohio State, Marshall, Cal and BYU. Ten conference games puts ND's potential opponents in a bind. Do they really want to play one of their precious nonconference games against someone like Notre Dame before their conference gauntlet? And without a formidable schedule, would Notre Dame be worthy of making the College Football Playoff if they had a good season? No, they wouldn't.

I know we base playoff bids on individual seasons, but dear lord, look at how Notre Dame has performed when they've made it to the big dance. Clemson smoked them in 2018 and Alabama womped them in 2020. They scored 17 total points in those two games. That alone should keep the Irish off the selection committee's radar. Would a team like UCF or Texas A&M have done any worse? I doubt it.

But, I'm speaking in terms of the CFP's current four-team format. With USC and UCLA looking to join the Big Ten in 2024 and Oklahoma and Texas reportedly looking to join the SEC the same year, we'll have at least two seasons of mega conferences and the four-team playoff as the CFP confirmed they won't be changing anything until 2025. That makes finishing high in these conferences all the more valuable because of the stiff competition. Does an 11-1 Georgia or an 11-1 Penn State who lost their conference championship game deserve a spot over an undefeated Notre Dame? Yes.

Playoff expansion looks inevitable with 12 teams as the most likely possibility, making an at-large bid more attainable. But, Notre Dame would be wise to join a conference to be safe, and that conference should be the Big Ten.

Notre Dame: Give Us Some Normalcy & Join the Big Ten 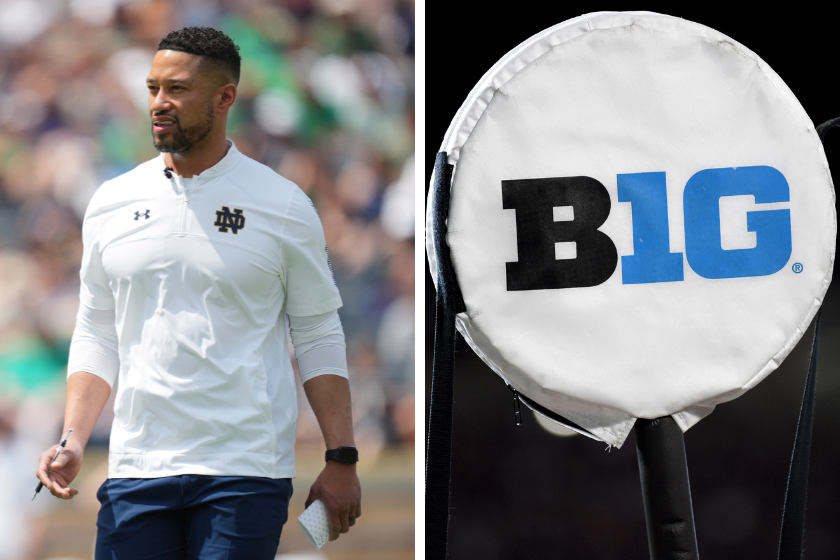 Remember when Nebraska joined the Big Ten in 2010 and the world nearly collapsed? Now, we're about to see USC travel to New Jersey and UCF fly to Provo, Utah for conference games, just as the college football gods intended. South Bend is in the heart of Big Ten country. A conference realignment move that makes geographic sense would be refreshing. They also fit culturally and have existing rivalries with Michigan, Michigan State and Purdue. The money helps, too. Notre Dame makes $15 million per year with their deal with NBC, and they have an estimated annual value of $120 million according to 247Sports. The Big Ten would salivate over the extra dough.

The SEC would be foolish not to take the Irish -- anybody would -- but please, Notre Dame, for the sake of giving us a semblance of normal college football, join the Big Ten. Give us a conference realignment that actually makes sense. I know you'll have to give up some cash and the longstanding tradition of being on your own island, but that's a fair price to not be left out of national championship contention.

Do the right thing.

MORE: 3 Rumored ACC Teams to Join the SEC? Don't Count On It.