Balding is a difficult subject for men. It's right up there with replacing the grill and running out of beer.

Each guy handles it differently. Some let it flow however biology intended. Some cut their losses early and shave their dome completely. Some, like NBA stars LeBron James and Carlos Boozer, never have to worry about this problem.

Others, like Drew Brees, take matters into their own hands.

Brees hung up the cleats this past year and joined NBC Sports' "Sunday Night Football" team of Mike Tirico, Tony Dungy, Mike Florio, Steve Kornacki, Chris Simms and Maria Taylor. It's nothing out of the ordinary for players to move into broadcasting after their playing careers, especially one of Brees' stature.

It is out of the ordinary for a man to be balding one week and sport a full head of hair the next.

What Happened to Drew Brees' Hair? 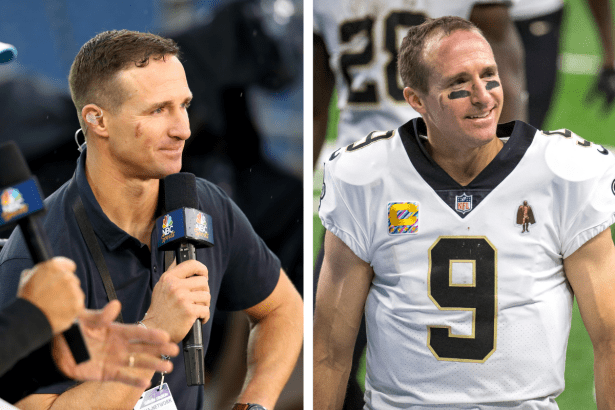 RELATED: Drew Brees Met His Wife After Downing 17 Shots on His Birthday

The 2021 NFL season opened where the 2020 season closed: Tampa, Florida. Football fans were eager to see the Thursday night matchup between the defending Super Bowl champ Tampa Bay Buccaneers and the Dallas Cowboys. There were plenty of questions heading into the season opener. Will Tom Brady finally show signs of slowing down? Can the Cowboys make the playoffs under head coach Mike McCarthy?

I flipped on the TV for a split second, cracked open a cold one and prepared myself for some football. Hold up. I needed to double take. Another question popped up.

What the hell happened to Drew Brees' hair?

The former New Orleans Saints and San Diego Chargers quarterback had a receding hairline during the final years of his career. Now, he has a new hairline straight out of a Rogaine ad. It was a feast for NFL fans on social media.

TRIGGER WARNING FOR THOSE LOSING THEIR HAIR IN THEIR 30s & 40s:

Drew Brees has clearly been spending his retirement, um, growing his hair, um, for television. pic.twitter.com/nHkoYWBLGA

I love you Drew Brees, but you ain?t foolin nobody with this new hair dawg ??? pic.twitter.com/CxqLmJTQwC

The 43-year-old has yet to make any public comment about his new hair. Did he get a hair transplant? Did he get a hair piece, hair plugs or use hair-regrowth products? Did he plant hair seeds on his scalp? No one knows, but the first two options are the most likeliest. You have to respect a guy who doesn't acknowledge a new do. Because why would he? It's always been like that.

Maybe his wife Brittany is the secret barber behind it:

Brees' hair becomes a trending topic whenever he pops up on TV. Whether that be giving his analysis from the broadcast booth while calling a Notre Dame game or sharing his opinion on the Cincinnati Bengals, Los Angeles Rams or New York Giants, Brees' hairline will make the news.

I'm heading straight to the sportsbook to put everything I own on Drew Brees' new hair winning the NFL Comeback Player of the Year Award.

MORE: Drew Brees' Net Worth Proves He Can Live Large in Retirement