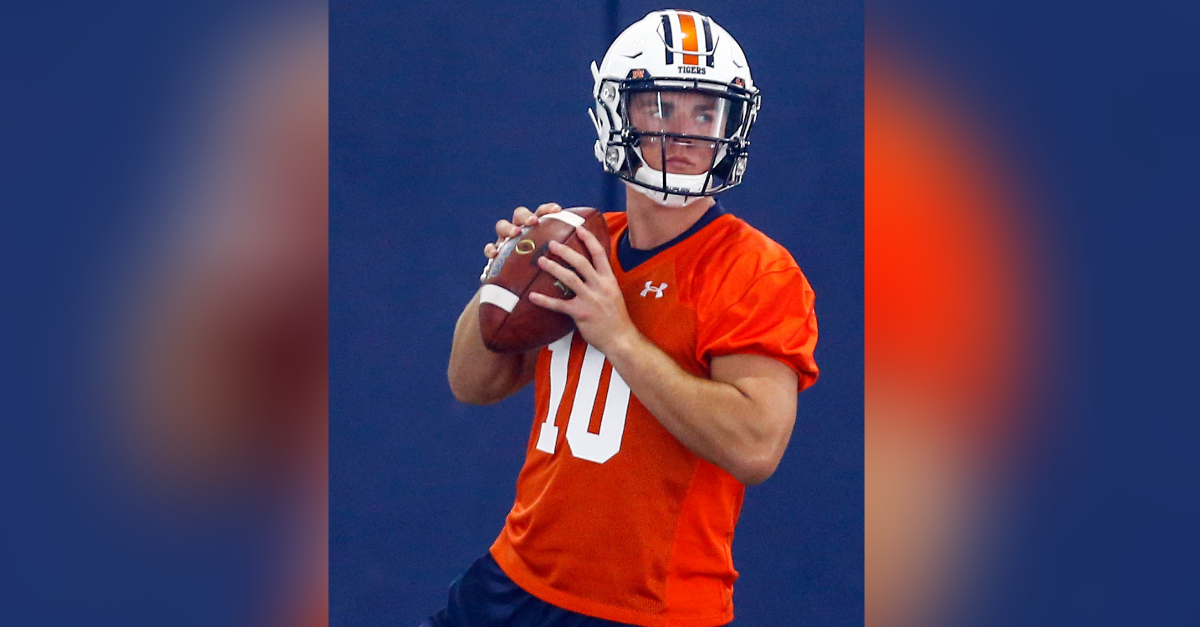 After Clemson quarterback Trevor Lawrence burst onto the national scene by leading his team to the College Football Playoff national championship, the narrative that first-year quarterbacks aren’t ready for the “big stage” is over. Lawrence became the first true freshman to start and win a national title since Jamelle Holieway led the Oklahoma Sooners to the 1985 title, and there are no plans for the Cartersville, Georgia kid to slow down.

While Lawrence might be the cream of the crop among true freshman QBs this season, the talent coming behind him is primed to change their teams after just one season as well. When it comes to the incoming 2019 class, they have enough firepower to bring national awards to their new homes after only one year.

There were a run of young quarterbacks to flourish in their first season in 2018. Nebraska’s Adrian Martinez was named a FWAA Freshman All-American. Iowa State’s Brock Purdy led his team to an 8-5 record while accounting for 21 touchdowns in his first year. Texas Tech’s Alan Bowman led the Big 12 with a 69.4 completion percentage, which was even higher than Heisman Trophy winner Kyler Murray.

The talent rising at quarterback from an early age is changing college football programs faster than we can count them. That narrative is no different heading into the 2019 season, and these six young quarterbacks are the ones you’ll come to love when they strap up for their school next year.

With former starting quarterback Shawn Robinson’s transfer to Missouri and senior Grayson Muehlstein’s graduation, the competition for TCU’s next starter is down to four underclassmen, but Duggan, the No. 10 dual threat quarterback according to 247Sports, could give them all a run for their money.

Duggan completed 66.1 percent of his passes for 2,130 yards, and he also racked up 1,223 rushing yards on 113 carries, totaling 49 touchdowns, which tied for the third-most in Iowa high school football in his last season. Expect more of the same when he lands in Fort Worth for 2019.

After the Wisconsin Badgers struggled to find success in 2018 and stumbling to a 7-5 record before rolling Miami (FL) in the Pinstripe Bowl, next year is likely their last with All-American running back Jonathan Taylor in Madison. The worst part is that both Alex Hornibrook and Jack Coan have proved to be ineffective throwing the football.

The 6-foot-3 incoming freshman guided his team all the way to the Kansas Class 6A state championship game against top-seeded Derby, but ultimately lost 24-16. During his senior season, Mertz broke the Kansas state record with 51 touchdown passes. If the No. 4 pro-style QB in the country can catch on quickly, the Badgers would be dangerous in the Big Ten next season.

Larry Fedora is out at UNC, but the Tar Heels bagged new head coach Mack Brown, which could prove to be the best coaching hire of the 2019 season. A new dynamic is coming to Chapel Hill, and with that change comes the No. 3 pro-style passer of this recruiting cycle: Sun Valley quarterback Sam Howell.

Howell, who was named a MaxPreps High School All-American after his stellar senior season, will look to take over UNC’s starting job from Nathan Elliott, who threw just 11 touchdowns and nine interceptions while starting all but one game for the Tar Heels in 2018.

The kid has a big arm and a ton of talent, and there might be no coach more likely to turn the page and start his reign off with a true freshman than Mack Brown.

Senior Manny Wilkins thrived under head coach Herm Edwards in their first and only season together. The senior leaves as the program’s fifth-leading passer all-time (8,624 yards) and a huge void now needs filled. With nine quarterbacks listed on ASU’s 2019 roster, competition will be at an all-time high, but one incoming freshman might beat them all on talent alone.

Cajon High School quarterback Jayden Daniels is the No. 2 dual threat QB in the nation coming out of California, and he’s an absolute stud. The four-year starter set a CIF Southern Section record with 14,007 passing yards. What’s more mind-blowing is that he accounted for 211 total touchdowns and racked up more than 6,000 total yards in both his junior AND senior seasons.

Daniels is listed as a “dual threat,” and playing in the high-flying Pac-12, this kid could be leading the rising Arizona State Sun Devils program before you know it.

Quarterback Jarrett Stidham is bound for the NFL. Head coach Gus Malzahn is clinging for his job. Auburn Tigers fans are hungry for redemption. What better way to heal their wounds than by adding one of the best players in the country?

Pinson Valley quarterback Bo Nix led his team to back-to-back state championships to close his prep career, and he did it in grand style. Nix’s name is all over the Alabama High School record book, but two numbers stand tall above the rest: he holds the state record for total yards in a career (12,497) and total touchdowns accounted for (161).

This kid could very easily show up on The Plains and start from day one, and with the way Gus Malzahn’s program has faired, there’s no reason he shouldn’t take a chance on this highly-touted young QB.

The cream of the crop. The king of the castle. La piece de resistance. 247Sports only gave one quarterback in the 2019 recruiting cycle a five-star rating, and his name is Spencer Rattler.

The No. 1 overall signal caller in the country held offers from Alabama, Notre Dame, and Texas and finished his prep career at Pinnacle High School in Arizona as the state’s all-time leader with 11,083 passing yards, becoming the state’s first high school QB to reach that milestone. However, after violating a district code of conduct policy, Rattler was ruled ineligible to play the final two months of his senior season.

With that kind of motivation, and head coach Lincoln Riley‘s history of breeding superstar quarterbacks, the Oklahoma Sooners could very well have found their next Heisman Trophy candidate before he’s even stepped on the football field.

Rattler, like all these other rising stars, have the tools to start from day one. These six programs are getting talented kids that are polished, established passers ready to take the college football world by storm. Don’t be shocked to see a few of these names tearing it up when the 2019 season kicks off next fall.

This story was originally published on January 8, 2019.