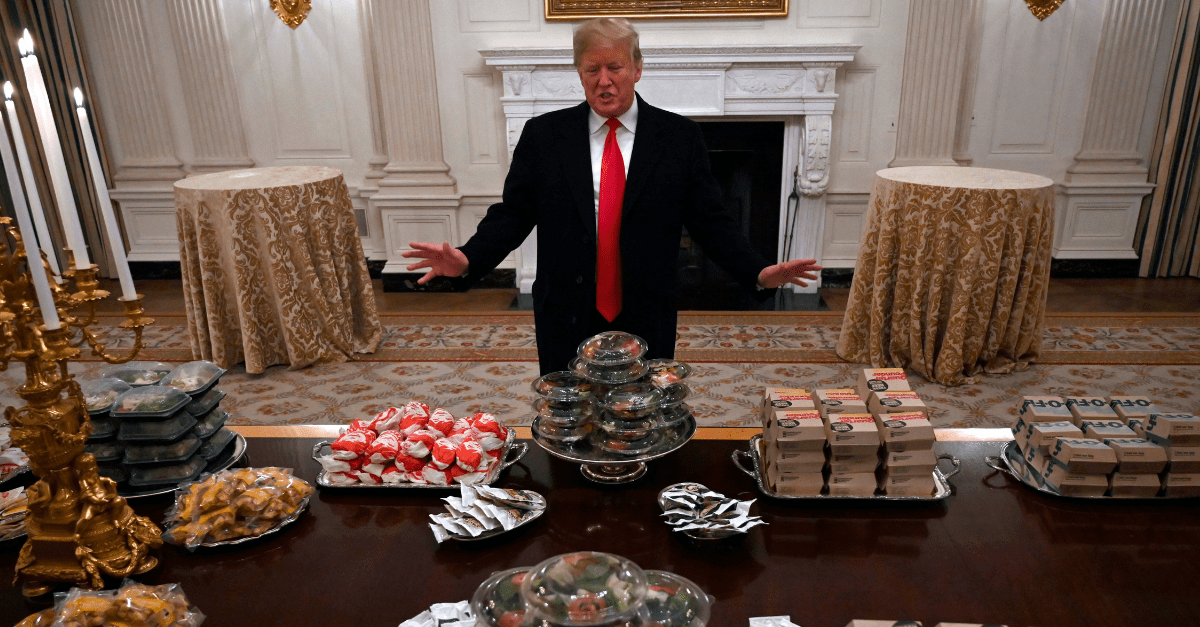 The Clemson Tigers are the 2019 College Football Playoff national champions, and the perks of securing the trophy are starting to roll in. Not only did head coach Dabo Swinney get a fat bonus check for the victory, the team also visited President Donald Trump at the White House.

Taking a trip to Washington D.C. has become a tradition for all championship sports teams. Although some have declined the visit to the nation?s capital over the years, the Tigers were all in to meet President Trump, have a press conference, and eat some dinner.

However, this wasn?t an ordinary dinner. Not the ones players are used to in Clemson?s $55 million football facility anyway. The national champions deserved to have a cheat meal for taking down the Alabama Crimson Tide at Levi’s Stadium in Santa Clara, California, and so the POTUS served the ultimate fast food buffet to the Tigers.

Seriously, this is a thing. It was a fast food kind of night at the White House with some massive visitors from South Carolina.

?I think we?re going to serve McDonald?s, Wendy?s, and Burger King with some pizza. I really mean it. It will be interesting and I would think that?s their favorite food. So we will see what happens.? ? President Donald Trump

Whether or not this was actually the team?s favorite food doesn?t matter here. Sometimes you just have no choice but to eat whatever is on the menu. What matters is how many burgers and fries it actually took to fill up the entire football team and coaching staff. Can you imagine how expensive that meal was?

“If it’s American I like it. It’s all American stuff,” Trump says, of table piled with burgers from McD's, Wendy’s, and Burger King. Another held Domino's and fries, per pool.

President Trump welcomed the NCAA national champion Clemson Tigers football team to the White House with a shutdown smorgasbord of fast food offerings he called "great American food," including piles of pizza and fries and more than 300 burgers. https://t.co/OVBdfzv4wg pic.twitter.com/dzEztYbia1

So one week after perhaps the biggest win in program history, the Clemson Tigers got their Big Mac, Dave?s Double and Whopper on. Needless to say, they definitely deserved it.