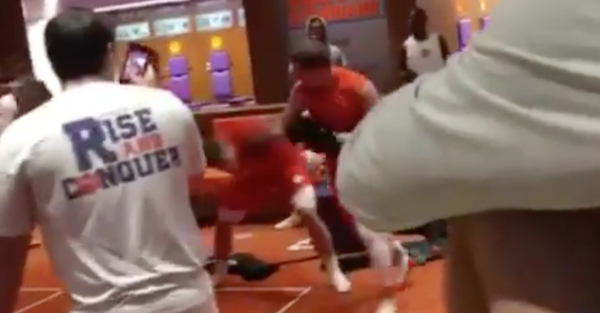 After Clemson’s shocking upset loss last Friday at Syracuse, the Tigers no longer control their own destiny in the ACC or for the College Football Playoff.

The Tigers are off this week before they take on Georgia Tech on Oct. 28 and a couple of players decided to cope with the loss by fighting each other in the locker room.

Now, to be fair, it doesn’t seem like a very hostile fight. They’re wearing boxing gloves and in socks, so it’s not as if the team if falling apart and they all hate each other. Dabo Swinney probably doesn’t want his players boxing, but it’s not like he lost the team.

It’s still entertaining to watch, and someone recorded it.

Related: Syracuse fan who rushed the field after beating Clemson is apparently dealing with the massive consequences of his decision

And if Clemson players were actually fighting and didn’t like each other, it’s doubtful players would be filming it and leaking it elsewhere.

It looks like a way for them to pass the time. No big deal. No harm done. Unless they lose to Georgia Tech, then talking heads will probably find a way to connect the two.