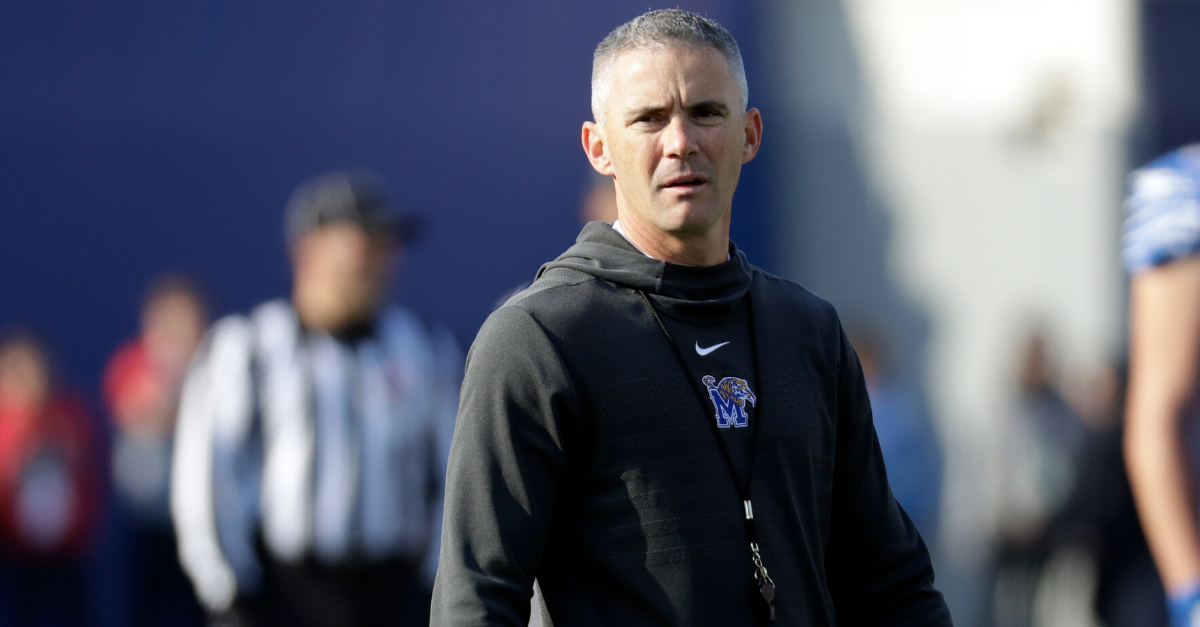 MEMPHIS, Tenn. (AP) ? Mike Norvell celebrated the best season in Memphis history and the program?s first American Athletic Conference championship with the No. 16 Tigers, all the while deflecting questions about his next job.

There?s plenty of time to focus on Florida State on Sunday, when two people with knowledge of the decision say the Seminoles will introduce Norvell as their coach. The people spoke to The Associated Press on condition of anonymity because an official announcement has not been made.

Florida State announced during Memphis? 29-24 victory over No. 21 Cincinnati that that the new coach would be introduced Sunday at a news conference in Tallahassee before a men?s basketball game.

Only Oklahoma, Ohio State and Alabama have averaged more points per game than Memphis during Norvell’s 4-year stint with the Tigers. pic.twitter.com/qnp7NtCdcd

The Tigers wrapped up their program-record 12th victory at the Liberty Bowl Memorial Stadium. Asked about Florida State on the field, Norvell deflected to his current team saying this was about the Tigers. Fans stood and cheered as the confetti flew, including one Memphis fan who kept repeating to himself that he hoped Norvell would announce he was staying.

?All our focus tonight is about this football team,? said Norvell, who appeared emotional while his Tigers talked earlier beside him. ?It’s not about me. It’s not about anything. It?s about this team and winning an American conference championship. I’m grateful for these guys and what they put in today, and we?re excited obviously about what we were able to do tonight.?

Memphis had lost the American title game the past two years, both on the road to UCF. Now the Tigers (12-1) are expecting to play in the Cotton Bowl as the best team from the Group of Five.

Asked if he would coach the Tigers in the Cotton Bowl berth Memphis expects representing the Group of Five, Norvell said simply, ?Obviously, that?s the plan.?

Norvell will leave Memphis having posted the highest winning percentage in Tigers? history at 71.2 percent going into this latest league title game. He built on the foundation left by Justin Fuente when he left the Tigers for Virginia Tech, and the Tigers went 25-3 at the Liberty Bowl in Norvell?s tenure.

He also led the Tigers to the first 12-win season in school history.

Named Memphis? head Dec. 4, 2015, Norvell won at least eight games in each of his four years here and reached double digits twice, including this year. Last week?s win over Cincinnati marked the first time Memphis had won 11 games in a regular season.

He will replace Willie Taggart, fired Nov. 3 by Florida State after going 9-12 as head coach. The Seminoles, who won the 2013 national title, finished the season becoming bowl eligible at 6-6 under interim coach Odell Haggins.

Norvell served as deputy head coach, offensive coordinator and quarterbacks coach at Arizona State before taking the Memphis post. His high-octane offense with the Sun Devils resulted in 299 yards passing per game in his final season, and an overall offense of 473.8 yards a game.

He brought that same creative approach to Memphis, where he called the bulk of the team?s plays even as he had a different coordinator each season.

His offense became known for its explosiveness, leading to big plays. This season, the Tigers are 10th in the nation averaging 483.5 yards a game ? 196.4 on the ground and 287.1 through the air ? before Saturday?s championship game. His teams scored at least 2,147 points in less than four seasons ? more than seven individual decades of Memphis football.

That offensive punch has led to several Memphis playmakers moving to the NFL.

Wide receiver Anthony Miller caught 32 touchdown passes in Norvell?s first two seasons before being drafted in the second round in 2018 by the Chicago Bears. Darrell Henderson was a consensus All-American who rushed for 1,909 yards and led the nation in all-purpose yards last year before being drafted by the Rams in the third round in April.

Tony Pollard, who was at Saturday?s title game, returned seven kickoffs for touchdowns for Memphis before being drafted in the fourth round by Dallas in April.

Before being hired by Memphis, Norvell was offensive coordinator at Arizona State for three seasons. He started his coaching career in 2006 as a graduate assistant at his alma mater Central Arkansas. He moved to Tulsa where he worked with receivers in 2007 and 2008 before being promoted to passing game coordinator for 2009 and 2010.