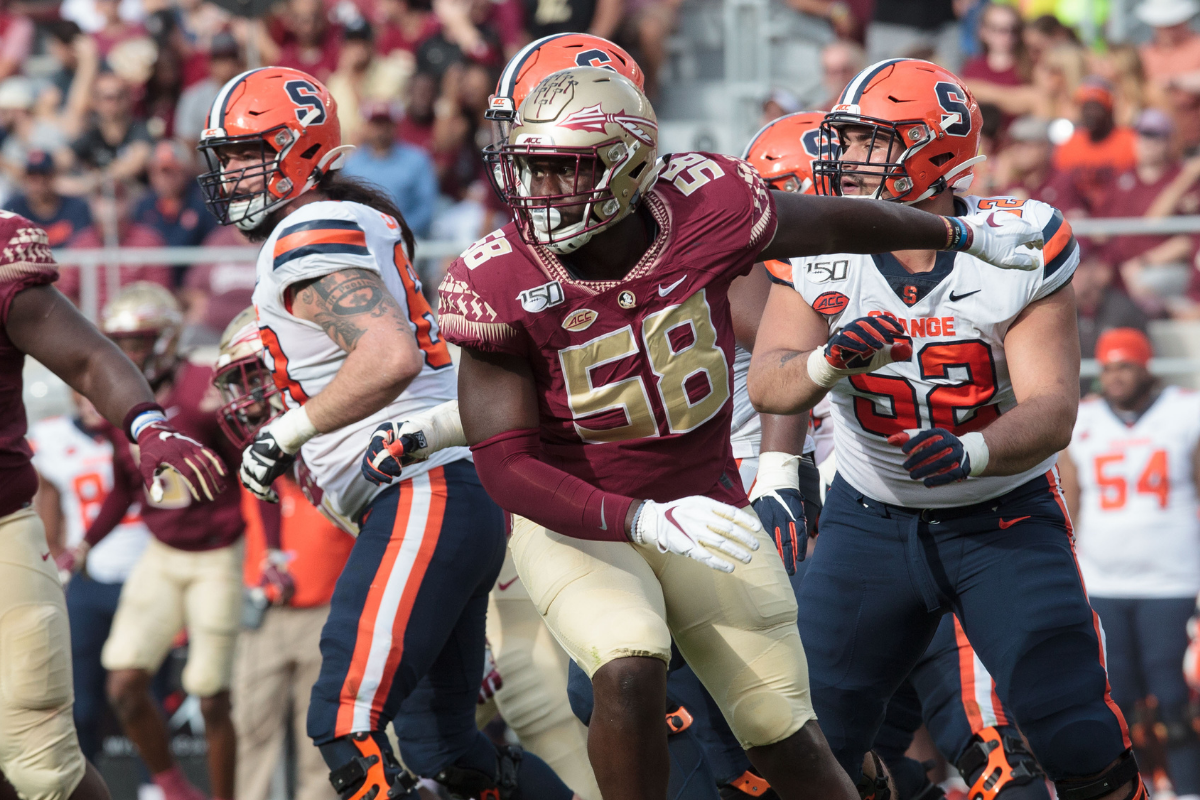 Dennis Briggs Jr. is making an inward move this year.

The Kissimmee, Florida, product changed from defensive end to defensive tackle this offseason. It seems to be paying off.

Florida State head coach Mike Norvell and his coaching staff have been raving about Briggs throughout preseason camp. He’s poised to be one of FSU’s biggest defensive playmakers, and he’s ready to introduce himself to the national college football audience.

Briggs is a big, strong, athletic defensive lineman who can quickly jump out of his stance. He actively pursues the ball out of the backfield and has the speed to make a play. Briggs even played a little tight end in high school and showed off his soft hands.

Briggs arrived in Tallahassee when Willie Taggart was still the Florida State football head coach. He redshirted his first year on campus and made an impact as a redshirt freshman in 2019, when he recorded 28 tackles, a sack, a fumble recovery and a forced fumble.

The firing of Taggart and the coronavirus pandemic threw a wrench into last season for Briggs. He opted out due to COVID-19 but returned with five games left, totaling six tackles and another forced fumble. The extra year of eligibility granted because of the pandemic makes 2021 Briggs’ fourth year on campus, but he’s only a redshirt sophomore on the program. He technically has two years left, but a good season for the Florida State Seminoles and Briggs could find himself in the NFL sooner than later.

This year, Briggs underwent some big changes. First, he switched positions to an interior defensive lineman. Then, he had a whole offseason to get into his best football shape. The difference has been noticeable.

The redshirt sophomore has been breaking through the offensive line to make tackles in the backfield. He’s been sacking the quarterback. He’s been a firecracker. Norvell talked about Briggs’ transformation, via the Orlando Sentinel.

“He’s a guy that I think has a chance to be a really, really good football player for us there inside, and you know we need that.”

Briggs said the position change was his idea because he wanted to help the team.

“That position change was fully on me,” Briggs told reporters during camp. “I felt like I could just help my team out better there. Making that move there has just helped me grow as a player.”

Briggs’ impressive performance in camp gave him the honors to “break the rock,” a Norvell tradition he brought from Memphis that signifies the end of fall camp. He explained the tradition last season, when defensive end Joshua Kanidoh smashed it:

“Every player signs, every coach signs [and then] we get a chance to get [to] choose a guy that has really demonstrated throughout camp the proper mindset, the proper approach,” he explained.

“When you accomplish that….when you get to smash that rock, it’s kind of just a physical stamp of a job well done and now we get to move to the next step.”

Briggs was the guy this year, and it certainly came to no one’s surprise when he was listed as a starter of the Noles’ depth chart in their opening game against Notre Dame. Joining Briggs on the defensive line are defensive ends Keir Thomas and Jermaine Johnson and nose tackle Fabien Lovett.

If camp and hype are any indication, ACC offensive lineman are going to have a problem when defensive tackle Dennis Briggs lines up across from them.