Despite the Hype, FSU’s 2015 Recruiting Class was Filled With Hits and Misses 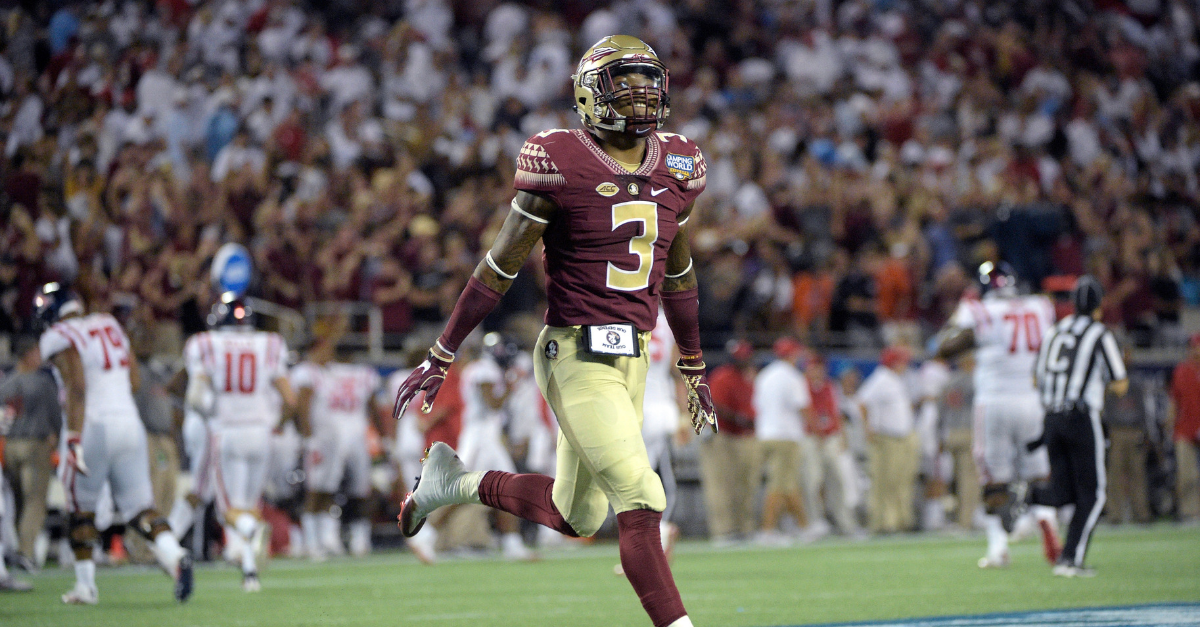 Back in 2015, the Florida State Seminoles, then led by head coach Jimbo Fisher, finished with the third-ranked class headlined by star defensive back Derwin James. Of the 20 players who enrolled at Florida State in the 2015 recruiting cycle, not many panned out the way fans hoped when they signed their National Letter of Intent.

Though there are some placers who found a ton of success, there are other who haven’t and didn’t stay in Tallahassee for long. With this class finishing their time at FSU, it’s time to take a look back at how well they fared.

To finish with the third-ranked class in the country, this was obviously a deep group with a lot of talent. According to 247Sports’ rankings, four five-star recruits and 10 four-star players initially went to FSU. For the most part, this class has not lived up to the hype they once commanded, especially since it was the second-consecutive year in the top four.

But what has happened to the 20 players who signed with the Seminoles? Who has played up to their expectations and who didn’t? Since it has been four years since this class signed, the only players who will be remaining on the roster would have redshirted at some point.

In three seasons, one of which he only played two games, James was the force many figured he would be when being recruited. He played 24 games and finished his collegiate career with 186 total tackles, 15 tackles for loss, 5.5 sacks, and three interceptions. He was so good in his short stint in Tallahassee, he was drafted with the 17th pick by the Los Angeles Chargers. He was also selected to the Pro Bowl during his rookie season.

Sweat was a solid player in his three seasons as a Seminole, but as a five-star recruit, it is tough to say he played up to that rating. He finished his career of three seasons and 35 games with 138 total tackles, 29 tackles for loss, 14.5 sacks, three fumble recoveries, and an interception. After declaring for the draft after his junior season, Sweat was drafted in the fourth round by the Philadelphia Eagles.

During his sophomore season, McFadden showed why he was such a highly-touted recruit out of high school. He had all eight of his career interceptions during his second season as well as all three of his tackles for loss. He finished his career with 53 total tackles and 16 passes defended along with his eight interceptions and three tackles for loss. He decided to declare for the draft after his junior season, but went undrafted. He was signed by the San Francisco 49ers, was released, then signed to the Indianapolis Colts’ practice squad, then released, and signed back with the 49ers’ practice squad.

Jacques Patrick, No. 3 Running Back

As a backup running back throughout his four seasons, Patrick has been pretty solid. Sitting behind Dalvin Cook and Cam Akers, he was never able to receive top-back carries, but he did take advantage of the touches he got. He finished his four seasons with 1,790 yards and 17 touchdowns with an average of 4.9 yards per carry. He also caught 47 passes for 356 yards and one touchdown. Even though it would have been nice to get more from the third-ranked running back in a class, I think he gave a lot of production as the backup to some other great running backs.

As a five-star receiver recruit, there were high expectations. Campbell has yet to reach them though and was added to the transfer portal in January. In his three seasons at Florida State, he has only caught 13 passes for 206 yards. If he does end up back with the Seminoles in 2019, hopefully he can show off why he was so sought after in high school.

FSU announces that QB Deondre Francois has been dismissed from the team. pic.twitter.com/NdjyYvtyU4

After a great redshirt-freshman season, it looked like the Seminoles had their quarterback of the future. But the terrible blocking in front of him led to a season-ending injury to start his sophomore season and a sub-par junior season. In his first season as a starter, he completed 58.8 percent of his passes for 3,350 yards, 20 touchdowns and seven interceptions.

It looked like he would come back and be the starter for his redshirt-senior season, but after a recording surfaced of domestic abuse between Francois and his girlfriend, he was kicked off the team. He was recently added to the transfer portal, but there is a good chance he won’t be picked up by a FBS program.

He has spent most of his career as a backup, playing in 20 games, starting just two of those. He will be back on the team in 2019 as a redshirt senior because he didn’t play his first season in Tallahassee due to an injury. The 2018 season was his best with 11 appearance and both of his career starts. Even if he doesn’t end up starting next season, he will definitely provide some good depth on the offensive line.

After being charged with four counts of fraud, Phillips didn’t appear again for the ‘Noles. But even before that happened, he hadn’t been extremely effective. In three seasons, he had five catches for 30 yards.

Taylor never played a snap for the Seminoles. His entire career at the college level was spent battling injuries, the first being a shoulder injury in the first spring of his career. He worked extremely hard to get past his injuries, but he just had terrible luck and was eventually medically disqualified.

Tate had a solid career with Florida State, completely outplaying the two higher-rated receivers in this class. During his best season as a junior, he had 40 catches for 548 yards and 10 touchdowns. During his career, he caught 65 passes for 957 yards and 16 touchdowns in 22 games. After his junior season, he decided to forgo his senior season in favor of the NFL Draft and was taken in the seventh round by the Cincinnati Bengals. He caught four passes for 35 yards as a rookie. He definitely could have been useful as a senior if he would have returned for the 2018 season.

After playing his freshman season with the Seminoles, Kilby-Lane left the program and eventually went the JUCO route before finding a spot with Mississippi State as a junior. In his one season in Tallahassee, he played mostly on special teams.

After four seasons of playing mostly as a special teamer, Brewton left the team after two games and an injury during the 2018 season.

Lorenzo Phillips, No. 1 Outside Linebacker (JUCO)

After transferring from East Mississippi Community College, the school of focus from Netflix’s “Last Chance U,” Phillips was supposed to have two years of eligibility for Florida State but would only play one season. He finished that season with 11 tackles, 1.5 for a loss.

Johnson has become most famous for his appearance on Netflix’s “Last Chance U.” He was the second of three former Florida State quarterbacks on the show after John Franklin III of the 2013 recruiting class left the program. Johnson was dismissed from the program after being charged with battery for hitting a woman in a bar. He eventually transferred to East Mississippi Community College and showed enough to find a spot at Florida Atlantic University. He was expected to compete for the starting job after Jameis Winston had left the program, but never got the chance to get on the field due to off-the-field issues.

Robbins was in the same situation as Darvin Taylor and was eventually declared medically ineligible after suffering from injuries throughout his time as a Seminole.

Even though he was one of the lowest rated recruits from this class for the ‘Noles, Westbrook had one of the best careers. During his senior year, he had career bests wit 65 tackles, 1.5 tackles for loss, and two interceptions. During his career, he finished with 147 total tackles, 3.5 tackles for loss, 1.5 sacks, two interceptions, 15 passes defended, and one fumble recovery.

After struggling to make his way onto the field at tight end during the 2015 and 2016 seasons, Wilkerson moved to the defensive side of the ball. He played in all 13 games during the 2017 season and finished with 19 tackles, six for a loss and half a sack. He declared for the draft after the season and went undrafted. He signed with the Houston Texans and then waived. He then signed with the Washington redskins but was waived.

After redshirting his first season, Minshew has started 23 games at guard. He should be one of the starters at that position in 2019 as long as he can say healthy, one of his main issues last season.