When we're talking about the college football games of all time, a number of them up are for debate. The 2006 Rose Bowl between USC and Texas will forever be up there. The 2013 Iron Bowl -- aka the "Kick Six" -- will live on, too.

But in terms of sheer talent on one football field, that distinction has to go the 1987 clash between Florida State and Miami. As if a Michael Irvin-Deion Sanders matchup didn't do enough to entice viewers already, this game featured a record 63 future NFL players, two future Pro Football Hall of Famers and a whopping 10 first-round picks. Think that isn't much? Consider that the 2019 LSU-Alabama matchup produced only 55 players who went on to be drafted.

Beyond the NFL showcase that this game wound up becoming, it was also pivotal in igniting a rivalry that stole the spotlight in the years after it. The best part is it featured a controversial (depending who you ask) decision by a legendary head coach. 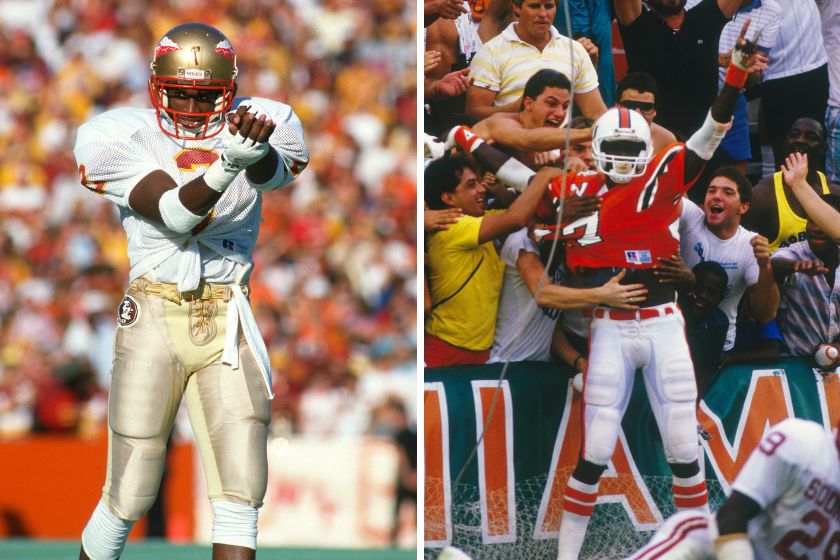 On Oct. 1, 1987, third-ranked Miami traveled to Tallahassee to take on fourth-ranked Florida State. The game was early in the season, but it would set the tone for the rest of college football.

Sanders was the headliner for FSU, which also trotted out Sammie Smith, Dexter Carter and LeRoy Butler. Miami's team featured Irvin, Bennie Blades, Steve Walsh and Russell Maryland (the 1991 first overall pick), among others. Of course, this was also when the draft was 12 rounds, which gave way to more NFL players.

"I'd never seen that much talent on a football field," FSU head coach Bobby Bowden said, according to the Tampa Bay Times.

The rosters made the final decision by Bowden all the more legendary, even if it didn't work out for Florida State.

Miami went up 26-19 late in the game, and Florida State answered by scoring a touchdown with under a minute to go. The natural decision was to kick the extra point and take the tie. Back then, overtime didn't exist.

Bowden had other plans. He originally sent out the kicking team, but he saw the disappointed looks on his players' faces.

"I changed my mind. I decided to go for two points. Didn't bat an eye. That was the kind of game that was. A day you go for it," Bowden said.

And so Bowden decided to put it all on the line. No ties. There would be one winner: the Miami Hurricanes. It was the Miami defense that stepped up on an all-or-nothing 2-point conversion. UM cornerback Bubba McDowell batted down a pass from FSU quarterback Danny McManus, thus determining who the kings of the state were.

If it felt like a national championship game, it's because it pretty much was. Neither team lost a game the rest of the season. Florida State finished the season 11-1 and ranked No. 2 in the final AP Poll. Miami went 12-0, taking down Oklahoma to win its second national title in five years.

Sure, this game may not have had as much at stake as a national championship game or a bowl game did, but it has to be mentioned alongside the best of all time. It's rare to have that much future NFL talent on the field at once. Plus, it helped lead to a period where the Seminoles, Hurricanes and Florida Gators dominated the college football landscape.