When Jordan Travis decided to transfer from Louisville after the 2018 season, it was clear he wanted to come back home. The three-star dual-threat passer from West Palm Beach, Florida, had a few options in the Sunshine State: Florida State, UCF, USF and Florida Atlantic.

With Florida State's quarterback room in a bit of disarray at the time, Travis saw an opportunity in Tallahassee. He also, in the process, was choosing the school that his older brother made the Travis name famous around campus, albeit in a different sport.

Four years since that decision, Travis hasn't looked back. He's got Mike Norvell's Seminoles on the verge of their first 10-win season since 2016 if they can take care of the Oklahoma Sooners in Thursday night's Cheez-It Bowl. He's already said he's returning for the 2023 season, too, which is a good thing for FSU considering he's an early 2023 Heisman Trophy candidate.

Travis is making his brother, Devon Travis, proud along the way. 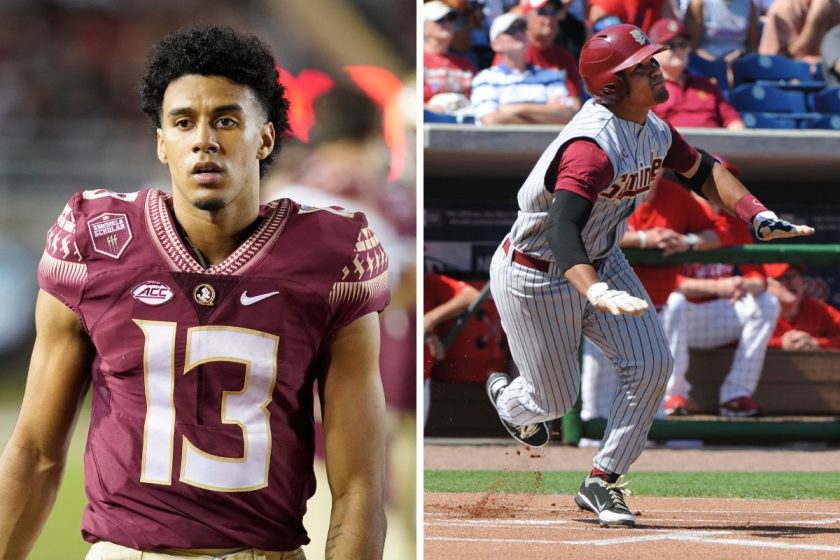 RELATED: Mike Norvell's Family Sacrificed It All for Chance at Florida State

If the last name sounds familiar, you probably remember Devon Travis. He was a standout second baseman for Mike Martin's FSU baseball program from 2010-12.

The 2011 First-Team All-ACC selection hit .329 and .325 in his sophomore and junior seasons, respectively, as a top-of-the-order threat. He was also a key part of the 2010 and 2012 teams that made the College World Series.

Devon, who starred in the Little League World Series way back when, was then selected in the 13th round of the 2012 MLB Draft by the Detroit Tigers. He cracked the big leagues in 2015, when he hit .304 across 62 games.

After four seasons and a number of injuries, Travis retired from playing baseball in 2021. He hasn't left the game, though, as he's currently a Triple-A coach in the Atlanta Braves system.

And while he's stepped away from playing the sport he loves, he's gotten to enjoy watching his younger brother become the face of FSU football over the last two seasons.

It's a special day for the Travis brothers. @DeVoTrAv (right) is coaching professional baseball for the M-Braves, and @jordantrav13 (left) is the starting QB for @FSUFootball tonight vs. Notre Dame.

"It has been so cool and I am so happy for him that he has finally gotten his opportunity, and he's taking his opportunity to leave it all on the field, every single play - that's what makes me most proud," Devon told The Tallahassee Democrat in 2020.

"The culmination of what he has been through and the fact this was his dream school his entire life - to be a football player at Florida State - it's so cool to see him loving the game at this level."

Now more than a decade after his brother made his mark at Florida State, Jordan Travis has a chance to do the same.

MORE: FSU Still Owns the Longest Bowl Streak Ever, Even If the NCAA Doesn't Recognize It