Miami is the Only “Tight End U.” Here’s Why. 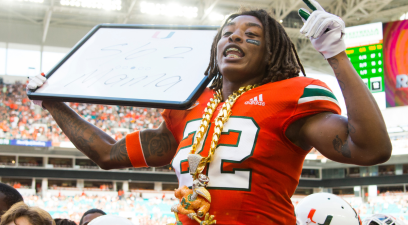 Every NCAA college football program wants to claim they are the best at producing talent at a certain position. There are teams which have great claims, too. However, no program in the country can claim the title of “Tight End U” from the University of Miami.

With not just a huge group of talented tight ends selected in the NFL Draft, the Hurricanes have also produced at the professional level. In fact, no other team even comes close at the position.

Since 2000, the Miami Hurricanes have dominated the tight end position in the NFL Draft with 12 selected. The Notre Dame Fighting Irish and Iowa Hawkeyes are just one behind, thanks to both T.J. Hockenson and Noah Fant being taken in the first round of the 2019 NFL Draft.

Iowa has had some good tight ends in the last few years, including Indianapolis Colts star Dallas Clark for nine seasons, but they still haven’t had the long tenure of talent like Miami. Notre Dame has also had a ton of talented tight ends drafted, but not nearly as much production.

Stanford had some really good tight ends enter the NFL, too, but that has only been for a short period of time with Coby Fleener, Zach Ertz, and Austin Hooper. Other schools with a hand full of tight ends draft are Penn State, Wisconsin, Oklahoma, Michigan, Florida, Alabama and Georgia.

None of them come close to Miami.

In the 2000s, Bubba Franks, Jeremy Shockey, Kellen Winslow Jr.., Kevin Everett, and Greg Olsen were the stars. All but Everett was selected in the first round of their respective draft and all had runs of being the best tight ends in the NFL.

In 2010, Jimmy Graham tried football instead of a shot at the NBA and was selected in the third round by the New Orleans Saints, He quickly became one of the most talented tight ends in the NFL, and still is today.

Since 2015, the Hurricanes have had Clive Walford, David Njoku, and Chris Herndon selected in the first four rounds of the NFL Draft. And although Walford’s career hasn’t taken off like expected, Njoku and Herndon are two of the best young tight ends in the league with the Cleveland Browns and New York Jets, respectively.

Much like Iowa had in 2018, Miami Football has two great tight ends currently on their roster that will definitely be selected in a few years with Brevin Jordan and Will Mallory. The claim of Tight End U has become synonymous with the Hurricanes, making the recruitment of top high school prospects at the position even easier.

Not only has Miami produced more players, but the Hurricanes have also been more productive in every way on the field. These numbers will definitely change with Iowa players like George Kittle, Fant and Hockenson all spending more time in the league, but Miami has young talent with Njoku and Herndon as well.

Miami has double the drafted tight ends than any other ACC school. The Virginia Cavaliers are second with six since 2000, but their last tight end selected was in 2009. Florida State has just two tight ends drafted in the last 20 years, and the highest pick was in the sixth round.

Numbers don’t lie, and the numbers clearly say The U is “Tight End U.” That is the easiest of answers at one position, even though Miami also has arguments for the titles of Quarterback U, Running Back U, Wide Receiver U, Linebacker U, and Defensive Back U along the way, too.