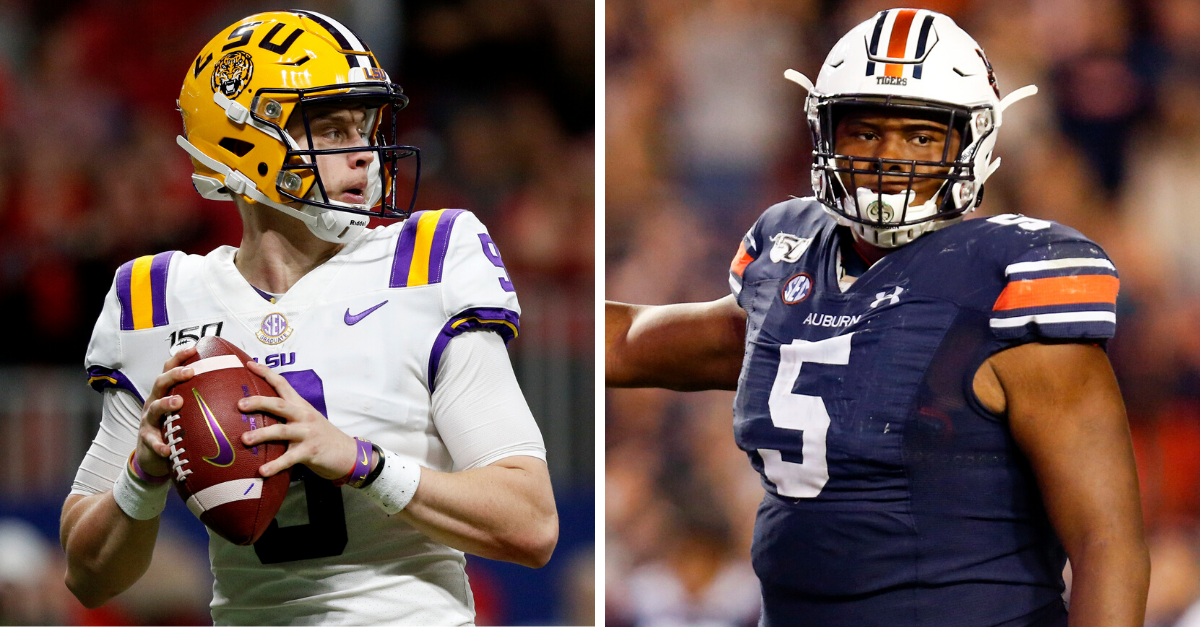 LSU quarterback Joe Burrow is a unanimous selection as the offensive player of the year on The Associated Press All-Southeastern Conference football team.

The top-ranked Tigers also have the SEC’s coach of the year in Ed Orgeron and the newcomer of the year in freshman cornerback Derek Stingley Jr., as selected by a 28-member media panel. The SEC defensive player of the year is Auburn tackle Derrick Brown.

Burrow, a leading Heisman Trophy candidate, was one of three players from LSU’s high-powered offense to earn unanimous first-team all-SEC honors. The others were running back Clyde Edwards-Helaire and wide receiver Ja’Marr Chase.

LSU convincingly beat No. 5 Georgia 37-10 in the SEC championship game Saturday in Atlanta and has earned the No. 1 seed in the College Football Playoff. LSU (13-0) returns to Atlanta to face No. 4 Oklahoma (12-1) in a Dec. 28 Peach Bowl semifinal.

Burrow gave it right back, saying one thing: "I’ll take the game ball after the National Championship.” 🔥 (via CBS) pic.twitter.com/7cotiqPlKV

Burrow has completed 77.9% of his passes and is on pace to break the Football Bowl Subdivision single-season completion percentage record owned by Colt McCoy, who completed 76.7% of his attempts in 2008.

He has thrown for 4,715 yards and 48 touchdowns – both SEC single-season records – with only six interceptions. Burrow has helped LSU score 47.8 points per game, good for third place among all FBS teams.

“The best thing about Joe is he’s a team player,” Orgeron said after the SEC championship game. “All he wants to do is win this game. Individual awards are not high on his list.”

Chase has caught 73 passes for 1,498 yards and 18 touchdowns, leading all FBS players in the latter two categories. Edwards-Helaire has rushed for 1,290 yards and 16 touchdowns.

For the first time since 2011, the Tigers are SEC Champions‼️#GeauxTigers#SECChampionship pic.twitter.com/Wevm8oEs6R

Stingley, who is tied for second among all FBS players in passes defended, has six interceptions and 15 pass breakups. Brown has 50 overall tackles, 12 ½ tackles for loss and four sacks for No. 9 Auburn.

No. 9 Alabama had five first-team picks and 11 overall all-SEC selections to lead all teams in both categories. LSU had four first-team selections and 10 overall picks.

No player who earned first-team all-SEC honors last year was selected for the honor this year.