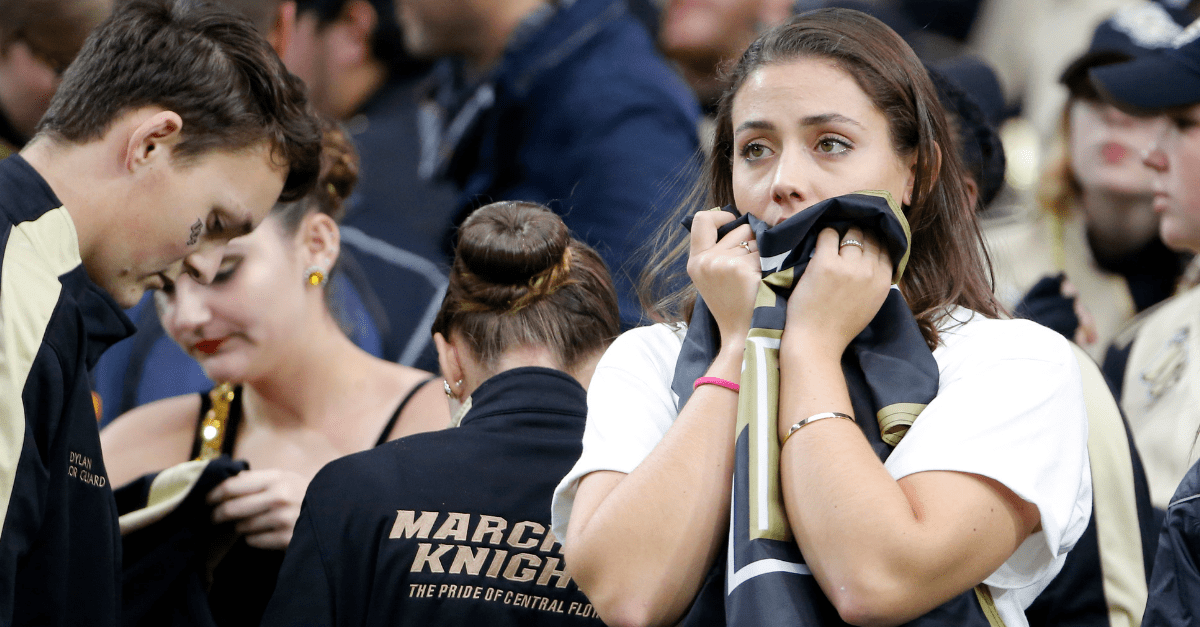 GLENDALE, Ariz. (AP) — There will be no self-proclaimed national championship for Central Florida this year.

Just some jokes at the Knights’ expense.

It was a matter of time for this #LSU #UCF pic.twitter.com/VGSXAlTQ0D

Coming from the mighty Southeastern Conference, LSU was eager to put the American Athletic Conference champs in their place.

“They was too cocky,” Tigers linebacker Devin White said. “Our coaches told us they were cocky. We just wanted to shut them up, and we shut them up.”

The seventh-ranked Knights entered as one of only three remaining unbeaten teams. The others are No. 1 Alabama and No. 2 Clemson, who meet for the national title next Monday.

Yet UCF was never in serious consideration for a spot in the four-team playoff and was eighth in the college football committee’s final rankings after playing a relatively weak schedule. Its biggest win came against then-No. 19 Cincinnati in November, but mostly UCF beat up on AAC opponents that don’t stack up with the nation’s top teams.

Knights fans loudly claimed the system was unfair, but UCF’s defense was anything but title worthy against the Tigers.

“Obviously, everyone in the locker room is really upset,” said UCF tight end Michael Colubiale, a senior. “We haven’t lost a game since 2016. The sophomore class hasn’t even lost a game since they’ve been here.”

A depleted LSU team rolled for 555 yards, easily the most allowed by the Knights this season. Burrow had touchdown passes of 22, 49, 33 and 32 yards. UCF, meanwhile, managed just 250 yards after entering the game ranked third nationally at 545 yards per game.

Darriel Mack Jr., a redshirt freshman who took over at quarterback for UCF late in the season when McKenzie Milton was injured, completed 11 of 30 passes for 97 yards.

The final score was made respectable with a UCF touchdown and two-point conversion with 2:24 to play. The Knights had one last shot from their 12-yard line, but Mack was intercepted and the fourth-longest winning streak since 2000 was over.

Coach Josh Heupel said it will be a good test for his program in how it responds to the streak’s end.

“First message about next year was handling the adversity of this football game,” he said. “This program’s not accustomed to losing. No one in that locker room has lost in a couple of years. How we handle that today, tonight, in the week before we get back on campus and we first start our offseason, all of those things will speak to who and what we’re going to be moving forward.”

A year ago, UCF ended its season with a victory over Auburn in the Peach Bowl and proclaimed itself national champion as the nation’s only unbeaten team, although Alabama took home the official trophy after winning the national championship game. The Knights celebrated with a rally in downtown Orlando, a parade at Walt Disney World and a proclamation by Gov. Rick Scott.

All of that presumably would have been repeated had the Knights won in Arizona.

It didn’t help that safety Kyle Gibson was tossed in the second quarter for targeting. Then again, two LSU players were thrown out, too. The Tigers also didn’t have three cornerbacks and their best pass rusher.

Still, they had enough for the overmatched Knights.