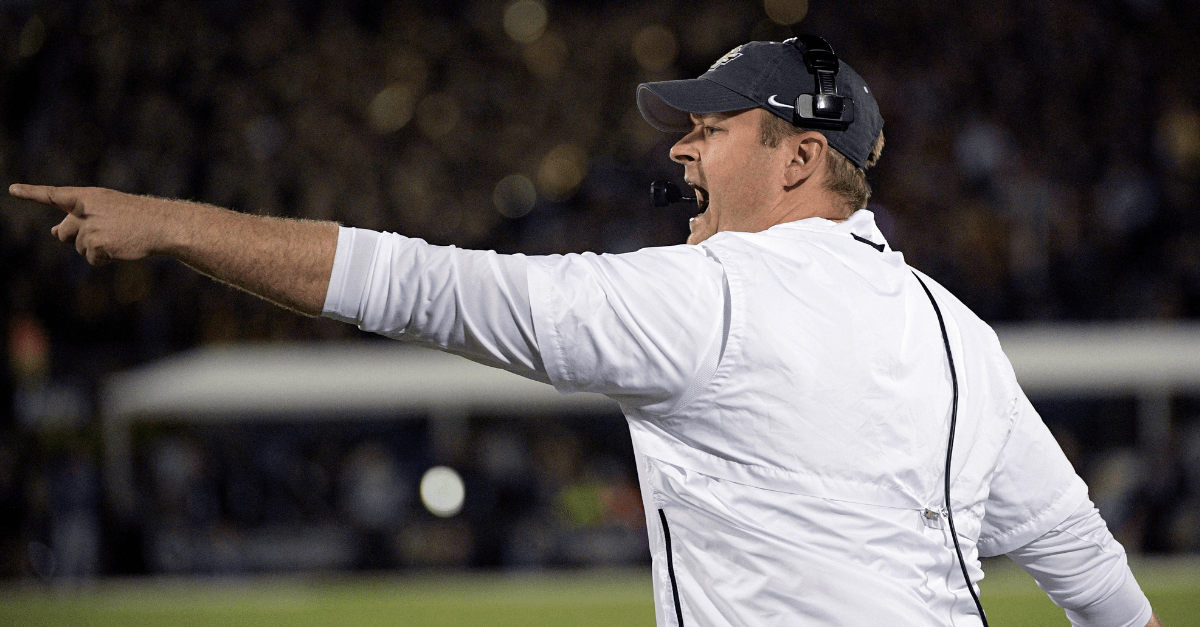 Do you know about the greatest team in the country? Let?s talk about them for a minute. Did you know they live in Florida and currently have the nation?s longest winning streak? Wait, it?s not the Alabama Crimson Tide? How can that be?

Stop me when you?ve heard this before: The UCF Knights are unhappy. In what has become a great, predictable, and oftentimes very annoying, tradition over the last two seasons, UCF administrators, coaches, players, and fans across the country have decided to let the world know all about those 25-straight wins and how little credit they?ve received. It?s an impressive feat, no doubt, but it?s time to give it a rest.

UCF was mad about its preseason ranking despite losing some key players and its head coach, fans decided to boast about a national championship they didn?t win at an Alabama game to start the 2018 season, and the national media continued to put them in their place over their uniquely bad schedule in the American Athletic Conference.

Still, when it came down to the College Football Playoff, the 12-0 Knights were not one of the four teams selected. Again. And they let everyone know just how sour they are about it. Again.

tHeRe Is A pAtH fOr UcF pic.twitter.com/ijSWxvHm3N

Even without injured star quarterback McKenzie Milton, a 56-41 win over Memphis in the AAC title game is nice. It?s nothing groundbreaking, but nice. Yet, when the CFP committee placed the Knights at No. 7 in the rankings behind Alabama, Clemson, Notre Dame, Oklahoma, Georgia and Ohio State, it turned into the social media show many expected.

So what’s the rule again? Four conference titles in six years and you’re in the playoff…right? 🤔 pic.twitter.com/nlkqAzZ5mQ

Here's what it feels like to be a BACK-TO-BACK Perfect Champion 👇 pic.twitter.com/5Ub3tlBQ2y

It doesn?t stop there, either. Even UCF athletic director Danny White joined in on the shade throwing.

Look, UCF is a fine football team. Head coach Josh Heupel has done a solid job replacing Scott Frost, the team has a lot of good athletes, and there is something to be said for winning every single game for two years.

Yes, the win over the Auburn Tigers in the Chick-fil-A Peach Bowl was impressive last season, too, but the Knights also had a month to prepare like it?s the Super Bowl of all Super Bowls. Boise State beat Oklahoma in the 2007 Fiesta Bowl. Nobody thought the Broncos were national-title good in the BCS era. Nobody thinks the Knights are national-title good in the CFP era except UCF.

It was also highly unlikely to include UCF after the unfortunate injury to Milton. A game against Alabama would have been even more catastrophic than when oddsmakers predicted the game?s spread when both teams were fully healthy.

There?s no doubt the College Football Playoff needs fixing. Almost everyone can agree with that. The system has its flaws, but under the current format, and with every single fact put in front of you, there is absolutely no way UCF?s body of work this season is any better than the No. 7 team in the country.

The UCF Knights should be ecstatic about another New Year?s Six bowl game this season, the chance to beat another SEC team in LSU at the Fiesta Bowl. Any other chatter is just the same old talk everyone else is tired of hearing.

READ MORE: Pick Me a Winner: Predictions for Every SEC Team?s Bowl Game