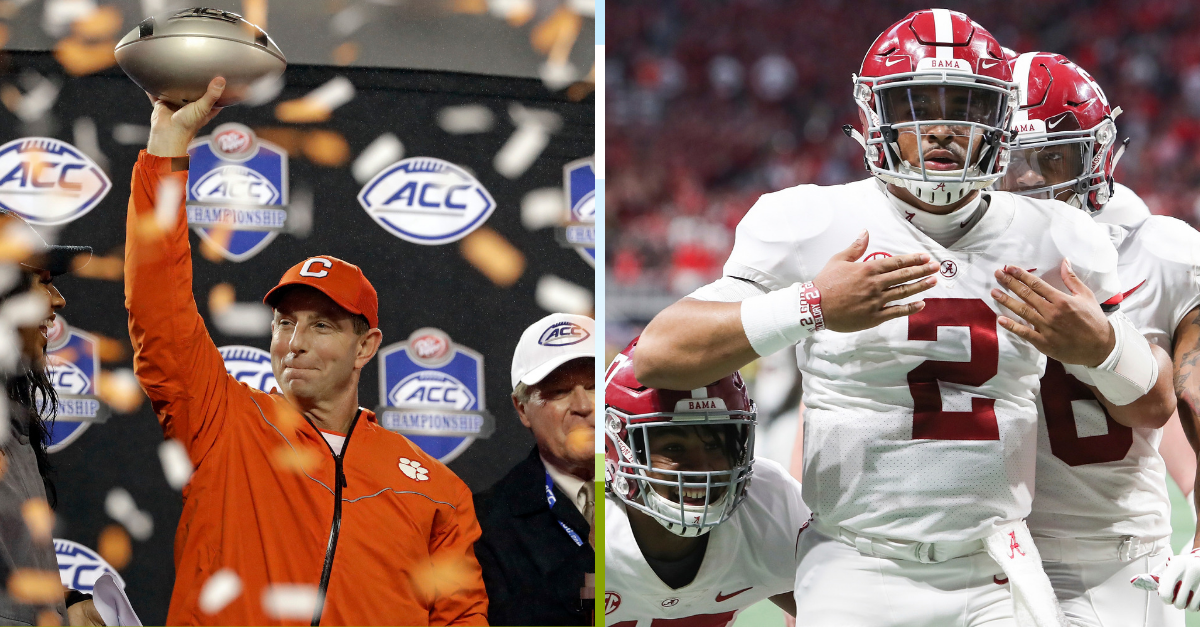 All season, the debate has raged about what four programs will have the chance to play for the College Football Playoff national championship. After a weekend that gave us a Heisman moment and a story made for Hollywood, the conference championships have made the final moves to complete this chess match.

On Sunday, the College Football Playoff committee made their final announcements, and as you’d expect, they didn’t come without some controversy about who did not make the playoff. Still, we have two national semifinal games set and ready for December 29, which will set the stage for the championship game on Monday, January 7 at Levi’s Stadium in Santa Clara.

It took heroics from quarterback Jalen Hurts to survive Georgia in Atlanta, but the Alabama Crimson Tide and coach Nick Saban are back in the College Football Playoff as the top-seed for the third time in the five-year history of this format. The SEC champions will await news on an MRI for Tua Tagovailoa, who left that SEC title game after getting beaten up by the Bulldogs, but the Tide proved why they are the overwhelming favorites and the top team in college football.

After winning the Big 12, the Oklahoma Sooners earned the fourth seed in the College Football Playoff. Kyler Murray powered one of the scariest offenses in the country all season, and the Sooners beat out the 5th-ranked Georgia Bulldogs and sixth-ranked Big Ten champion Ohio State Buckeyes for the final spot.

Rather than being a virtual home game for coach Lincoln Riley and his Sooners, this game will head to the Orange Bowl at Hard Rock Stadium in Miami, and it’s going to be an interesting matchup pitting Kyler Murray’s electric offense against his Heisman Trophy opposite in Tua Tagovailoa and Alabama’s record-setting offense. This game is going to be fun, and many people believe no team is built to beat the Crimson Tide more than Oklahoma.

After winning the ACC title for the fourth-straight season and defeating the Pitt Panthers in convincing fashion, the Clemson Tigers and head coach Dabo Swinney will head to playoff for their fourth year in a row, but they’ll be getting a brand new opponent hungry for a piece of the action in their first CFP appearance.

After finishing their regular season with a perfect 12-0 record for the 14th time in school history, the Notre Dame Fighting Irish watched championship weekend unfold from the comfort of South Bend, Indiana. Coach Brian Kelly’s team had an extra week to get healthy and watch their potential opponents in action, but don’t expect this national semifinal to be a one-sided affair.

Both Clemson and Notre Dame are built from the inside out, as they boast some of the best offensive and defensive lines in the country. This game is going to be won in the trenches, and with two of the most balanced teams in all of college football facing off, this one figures to be an all-time classic when they meet in Arlington, Texas.

The ACC and SEC are the only conferences to reach the College Football Playoff each season, while the Big Ten champ finds itself excluded for the 3rd straight season.

The selection committee felt that Ohio State’s loss to Purdue early in the season wasn’t enough to give them the nod over Oklahoma. Also, the Pac-12 champion Washington Huskies weren’t going to get the committee’s praise with only a 10-3 record, but they’ll head to Pasadena, California for a showdown with Ohio State in the Rose Bowl.

Unless Oklahoma wins the title, this will be the first season where the national champion has an undefeated record. This one is going to be a lot of fun that should deliver an epic national championship game regardless of what teams advance.