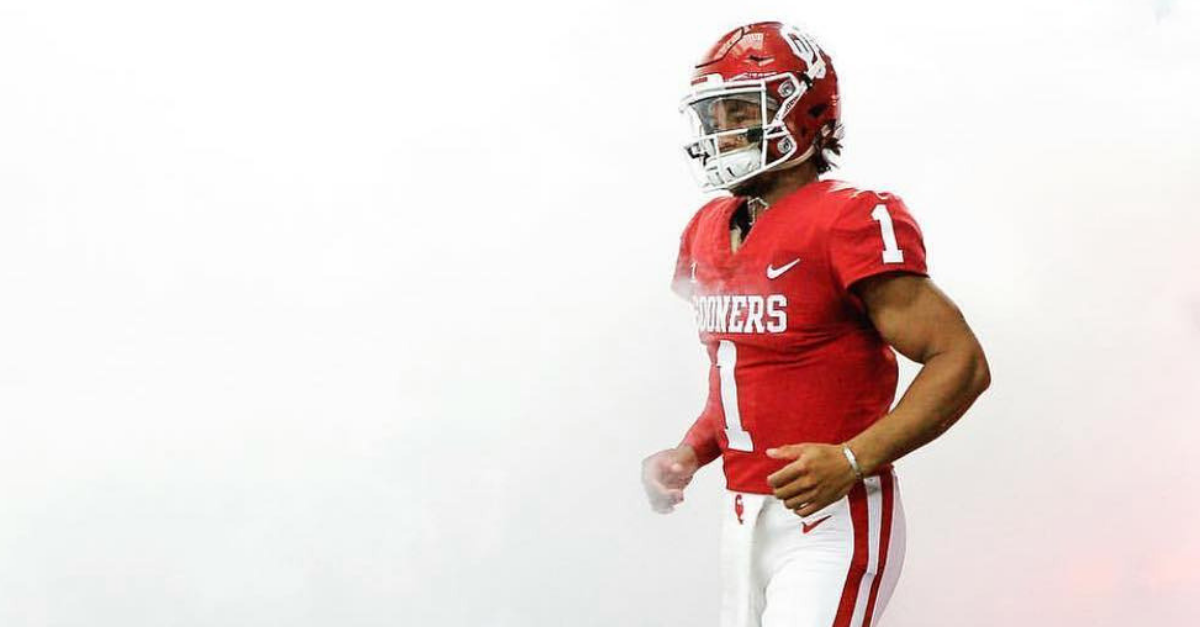 You don’t work your way to the top of Division I college football, as well as become a top-10 MLB Draft choice, without having some alpha dog in you. That’s exactly the DNA that Oklahoma quarterback Kyler Murray was blessed with, and he’s making sure that everybody in the state of Texas knows that he’s the lead dog heading into the Big 12 Championship game.

During a press conference prior to the Sooners’ highly-anticipated rematch with the Texas Longhorns, Murray was asked how much he respected Texas quarterback Sam Ehlinger‘s game. His answer is classic rivalry trash talk, and he better buckle his chinstrap a little tighter for this Red River Rivalry rematch on Saturday.

Last week, a reporter had asked the Heisman Trophy candidate what he thought of Alabama Crimson Tide quarterback Tua Tagovailoa. Murray said that he did respect Tua’s game, and for good reason — it’d be almost impossible to debate the opposite.

When that same reporter asked Murray that question about Ehlinger, though, whose Texas team won the first time these two met in October, the Oklahoma Sooners’ star wasn’t so eager to dish out the same praise.

“I got no comment on that,” Murray said after bursting out in a fit of laughter.

This OU-Texas Monday gets a 9.5-out-of-10. The way it should be. #Sooners #HookEm #HornsUpForPeace pic.twitter.com/q7TRPDhHbB

Sit back, put your feet up, and get ready to watch an ELECTRIC Big 12 Championship game filled with two heated rivals who, clearly, have something to prove.

Back on October 6 at the Cotton Bowl in Dallas, Texas QB Sam Ehlinger accounted for 386 total yards of offense and five total touchdowns, while Kyler Murray rattled off 396 total yards and five touchdowns of his own, but the latter turned the ball over twice. The Longhorns held off a 21-point fourth quarter run by the Sooners to win the game, 48-45.

After that game, Murray brushed off the traditional postgame handshake with Ehlinger. According to ESPN’s Jake Trotter, Murray said that if OU had won that game, “I wouldn’t have run up on him in that moment.”

Heading into the Big 12 title game at AT&T Stadium in Arlington, Texas, the stakes couldn’t be higher for both teams. The Longhorns are on the verge of their first conference title since 2009, and the first under Tom Herman, while the Sooners could earn back-to-back bids to the College Football Playoff semifinals with Lincoln Riley at the helm.

They may not like each other, but these two quarterbacks are going to be the deciding factors in a game that figures to go down as an all-time classic in this rivalry. The fabled “Golden Hat” won’t be on the line, but the stakes are a lot higher.

Get your popcorn ready for another installment of the Red River Showdown.