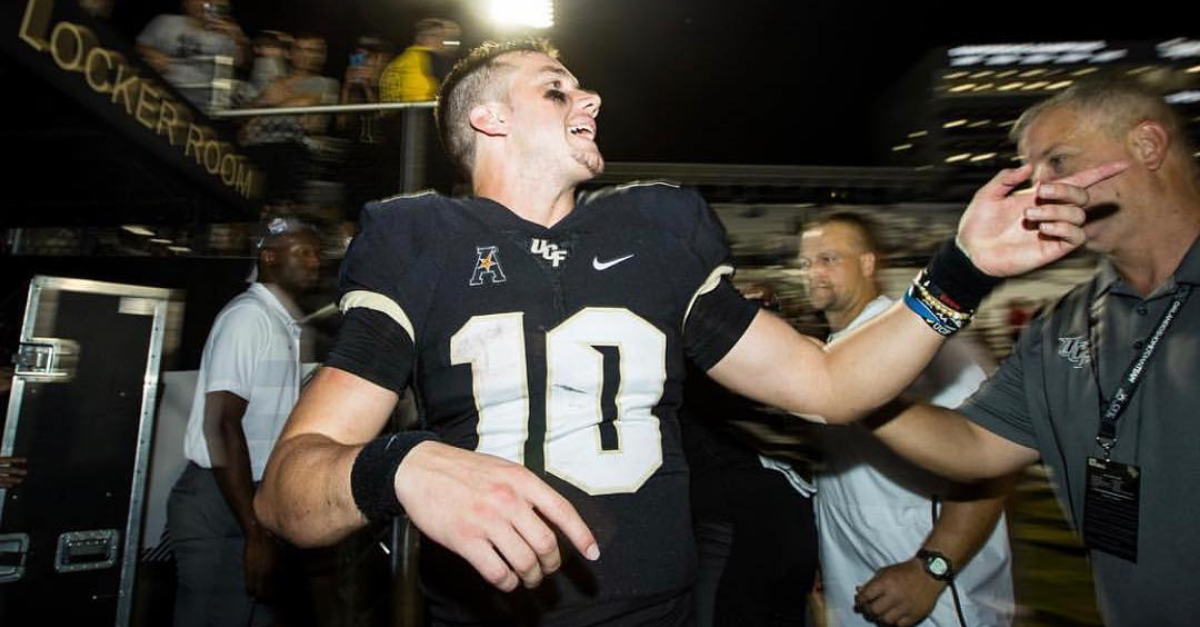 You can argue for and against the UCF Knights making an appearance in the College Football Playoff, but the final decision rests in the hands of the CFP committee to make. That isn’t going to stop fans from reminding everyone via pregame banners of this team’s undefeated season in 2017, and once again getting disrespected in 2018.

The frustration for the Knights, who are still outside the top-10 in both the AP Poll and the CFP rankings despite a 9-0 record, is starting to boil over. Junior quarterback McKenzie Milton has led this team for almost three seasons, which includes the current 22-game win streak started last year. Milton believes that this team is a real contender, and not even the undefeated Notre Dame Fighting Irish measure up to his Knights.

In an interview with Bleacher Report, Milton sounded off on the third-ranked team in college football saying, “You can’t tell me Notre Dame is a better team than us.”

“Notre Dame scored late to beat Pitt [19-14], and you hear the [College Football Playoff] committee talk about how great it was for them to pull it out. Then what we did to Pitt [winning 45-14] is ignored.”

“Thirteen dudes in a room hold our fate.” — McKenzie Milton, via Bleacher Report

That Notre Dame team Milton is ragging on? They’re about as balanced of a team as there is in the FBS, scoring 34.5 PPG (29th in the nation) and allowing 18.7 PPG (15th in the nation). Head coach Brian Kelly’s program is back in the national title conversation after last appearing, but losing, the 2013 BCS National Championship game to the Alabama Crimson Tide.

If the College Football Playoff selection committee always talks about “the eye-test” as the determining factor if a team gets in, then Milton firmly believes they probably aren’t watching the Knights dominate.

“Watch us play,” Milton said. “Then make your decision.”

UCF gets buried for their weak schedule, but this team survived a coaching change from Scott Frost to Josh Heupel that many believed would cripple the program. In 2018, UCF once again boasts a high-powered offense averaging the second-most yards of total offense (543.0 YPG) and the fourth-best rushing offense (271.4 YPG) in all of college football.

RELATED: The Betting Line for a Potential UCF-Alabama Game is Absurd

UCF is rolling this season led by their Heisman Trophy candidate at quarterback. Milton has racked up 2,309 passing yards, 29 total touchdowns, and ranks ninth in the country with 324.3 total yards per game through his team’s undefeated start.

The Knights knocked off the No. 7 Auburn Tigers in the Peach Bowl in 2017 and outgunned the No. 6 Baylor Bears, 52-42, to win the 2014 Fiesta Bowl, but the program STILL doesn’t get an honest chance to compete with the best of the best.

It’s time to take Milton’s advice: watch Central Florida host ESPN College GameDay and dominate Cincinnati, and let’s finally put an undefeated AAC champion from Orlando, Florida in the College Football Playoff once and for all.

READ MORE: 3 Things UCF Needs to Do to Make the