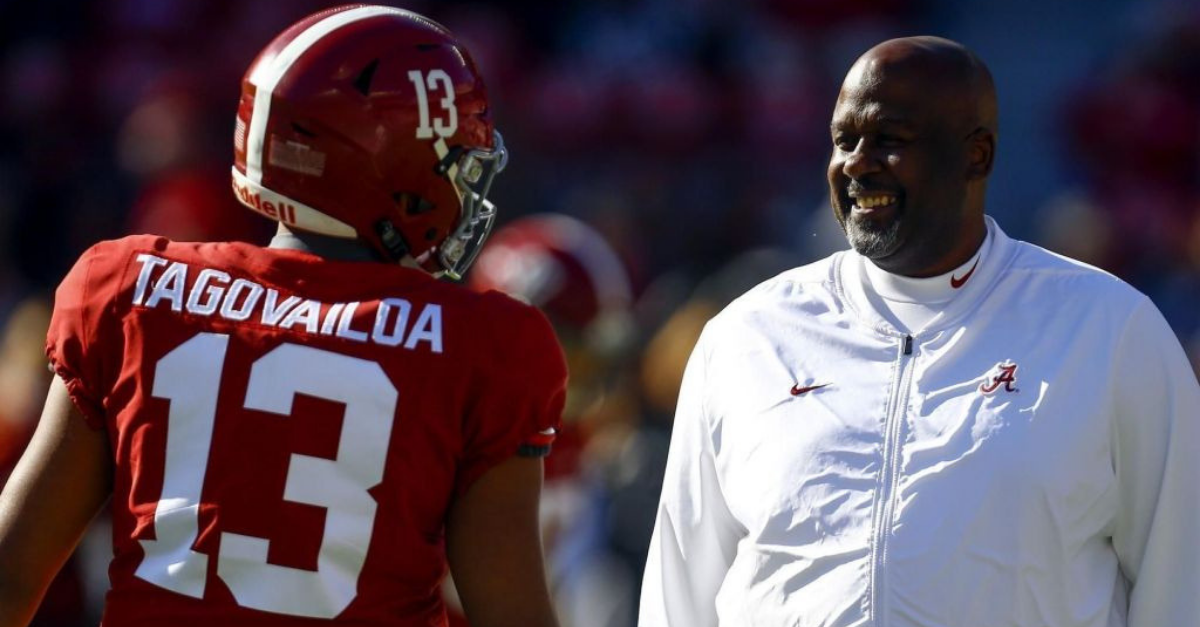 The best offense in college football resides in Tuscaloosa, Alabama. Heading into the SEC Championship game against the Georgia Bulldogs, the undefeated Alabama Crimson Tide are second in the nation in scoring (49.0 PPG), fourth in total offense (538.0 YPG), and lead the nation in passing efficiency thanks to quarterback Tua Tagovailoa.

They’re built of elite, NFL-caliber players at running back, wide receiver and all across the offensive line, too. However, they’re thriving in the image of first-year offensive coordinator Mike Locksley, and this might be the last season the 48-year-old leads the Crimson Tide offense as an open coaching position looks more and more like his next full-time job in the Big Ten.

According to reports from The Washington Post, Locksley will interview for the head coaching vacancy of the Maryland Terrapins after the SEC title game on Saturday in Atlanta.

#Alabama OC Mike Locksley is expected to interview for the Maryland job following the SEC Championship Game, per reportshttps://t.co/MuATNyd07a pic.twitter.com/r59CsqHPKB

The move isn’t all that surprising considering Locksley, who is a native of Washington D.C. and played college football for the Towson Tigers in Maryland, has previously coached the Terrapins for 10 total seasons at two different times during his career.

The first, a stint from 1997-2002, saw him coach running backs for the school, and the second came from 2012-15 when he was the Terps’ offensive coordinator. Locksley also took over as interim head coach for the final five games of the 2015 season after head coach Randy Edsall was fired.

Locksley was 1-4 during that time.

Prior to the Maryland job, Locksley was the head football coach of the New Mexico Lobos in the Mountain West Conference — He was 2-26 before getting fired during his third year with the program.

After that, Locksley came to Alabama as an offensive analyst in 2016, became the wide receivers coach and co-offensive coordinator the following year, and took over as the team’s OC this season.

The scariest part about this entire ordeal? If Locksley cashes in on his high stock at Alabama working under head coach Nick Saban and jumps to Maryland, who do you think the Crimson Tide would consider to take over their high-powered offense?

Myth Busting Monday…we are not a just a football factory but man we have tremendous tradition around here… https://t.co/hn0F0L8YmX

RELATED: Could a Former SEC Coach Be Interested in the Maryland Job?

The Crimson Tide would very much be in the running to get offensive mastermind and former Texas Tech head coach Kliff Kingsbury on a plane to Tuscaloosa for an interview.

Locksley can leave for the head coaching job at a broken program if he feels like that’s best, which makes a lot of sense with his ties to that area of the country, but to open the door for someone like Kingsbury to coach this offense led by Tagovailoa in 2019?