Bowl Projections for the Best Conference in College Football 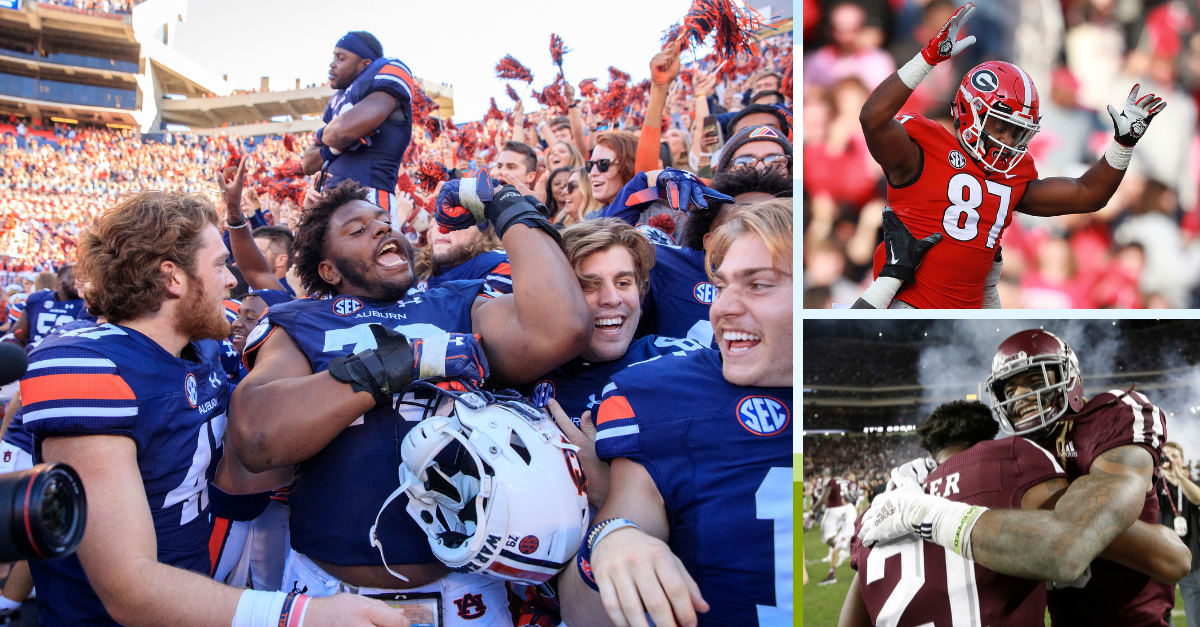 With the highly-anticipated SEC Championship game set to take place at Mercedes-Benz Stadium in Atlanta on December 1, the top of the conference is still up for grabs. Madness could ensue, and that would throw things off prior to Selection Sunday, but it’s not going to change what conference won 2018.

The SEC boasts 11 of its 14 teams as eligible for a postseason bowl game, the most of any Power 5 Conference. You won’t see Tennessee, Ole Miss or Arkansas anymore this season, but once again, the Southeastern Conference earns supreme bragging rights as the best conference in college football. So, where could you get to see the SEC during bowl season?

This year, the College Football Playoff semifinal games will be reserved for the Capital One Orange Bowl and the Goodyear Cotton Bowl Classic. That leaves four more “New Year’s Six” bowl games to be picked from the remaining teams, the CFP National Championship, and another 33 bowl games for eligible programs to cap their seasons in style.

Here are some bowl projections leading up to Selection Sunday on December 2.

Alabama Crimson Tide vs. CFP No. 4

While the hype surrounding a highly-anticipated rematch of last year’s CFP title game sounds great, don’t expect Alabama to make this year’s game quite that close. The Crimson Tide team is firing on all cylinders, and unless something catastrophic were to happen, it’s hard to imagine them losing to the Bulldogs. They’ll likely get the top-overall seed in the four-team playoff and await their opponent for the first national semifinal game on December 29, which could be Ohio State if they win the Big Ten Championship in convincing fashion.

Next in the pecking order should be Georgia. They were man-handled LSU earlier in the season, but the seven-overtime thriller against Texas A&M should knock the Tigers down a few pegs just behind the Bulldogs when the CFP committee makes their final selections. This hold especially true if Georgia has a strong showing against Alabama in the SEC Championship. Plus, a shootout on New Year’s Day with the Big 12 champ would be loads of fun.

Since 2000, the list of players with 5 sacks, 5 interceptions, and one forced fumble is short.

It's @showtime9_ and nobody else. It's why he's a finalist for the @NagurskiTrophy. https://t.co/voA06Ubzl8 pic.twitter.com/qIPrsCCsdt

LSU didn’t finish the way they’d hoped, but being the third-best team in the SEC still means they’re likely going to get a spot in the New Year’s Six bowls. Their opponent could range from a team like the Michigan Wolverines to potentially the UCF Knights should they win the AAC Championship. There will be a lot to digest after this weekend, but LSU should definitely be a lock for a major bowl sitting on a 9-3 record.

Next up are the Florida Gators sneaking in for the fourth NY6 bowl selection by an SEC team. Entering Championship Week, Dan Mullen’s team is ranked among the top-12 teams in college football, so they could very well get a shot at the Fiesta Bowl. Just like LSU in the Peach Bowl, the Gators would await the madness of this weekend before knowing their fate, but it seems like the committee is on board with their 9-3 resume, which includes victories over LSU and Mississippi State. A matchup with Penn State could very much be in the cards out in Glendale, Arizona.

What once felt like the potential for a New Year’s Six bowl game fell short of expectations in Lexington, but the Wildcats losing two of their last four games. Still, this nine-win team is on the verge of the program’s first 10-win season since 1977, and it’ll take one more Herculean effort from running back Benny Snell to get the job done. Keep an eye out for teams like Northwestern or Syracuse to fill this spot opposite Kentucky.

Jimbo Fisher‘s first season in College Station is all but made after outlasting LSU in, arguably, the best college football game in recent memory. The Aggies finished their regular season 8-4 and 5-3 in the SEC, which is good enough for second place behind Alabama in the SEC West. They’ll have a chance to finish with nine wins and be ranked inside the top-15 with a postseason win. A matchup with the Iowa Hawkeyes would be classic, smash-mouth fun in Tampa.

The Bulldogs had a solid season under first-year head coach Joe Moorhead, but lacking a legitimate passing attack hurt them in the long run. Still, eight wins is no small feat, and the top-ranked scoring defense in college football will be looking to secure the program’s fourth nine-win season the last five years. It’d be an awesome game to pit the Bulldogs rushing attack against a team like Boston College or Georgia Tech.

The Tigers massively underachieved in 2018, and while Gus Malzahn’s job appears to be safe on the surface, change is coming next season in some fashion. The best way to salvage a down year is by winning their bowl game in style. They could see a team like Miami (FL) or Michigan State during the bowl season, but what they’d really hope for is a game against Wisconsin — two teams that underachieved, squaring off in the ultimate race for eight wins.

🎥 In his final game at #TheZou, @DrewLock23 went out in style yesterday 💯#MIZ #ShowMe 🐯🏈 pic.twitter.com/4CcN539wOl

The high-flying Tigers started slow, but they are rolling into bowl season on a four-game winning streak. Drew Lock has reaffirmed the belief that he’s a legitimate first-round quarterback in next year’s NFL Draft, and he’ll hopefully put the third-best scoring offense in the SEC up against a high-flying Big 12 team like Iowa State.

The Gamecocks didn’t win the games they needed to this season, going 0-5 against ranked teams. That being said, they did manage to win every other game on their schedule, and that earns them a bowl game. It could be a matchup with the Virginia Cavaliers that stands in the way of South Carolina’s second-consecutive bowl win.

Quietly, the Commodores are on the brink of their first winning season since 2013, and the first in the Derek Mason era. At 6-6, and riding a two-game win streak, they’ll sneak into a bowl game with a lot of momentum. Teams like TCU or Oklahoma State would present unique challenges for Vandy and quarterback Kyle Shurmur, but I would not be surprised to see them get win No. 7 and finish 2018 in style.