It's going to be hard to top the madness of Texas A&M's 74-72 win over the LSU Tigers. The 2018 game featured a record-tying seven overtime periods, the NCAA record for total points in an overtime game (146), the most points ever allowed by a ranked team in FBS history, and more than 1,000 total yards of offense.

It was pure madness when the highest-scoring game of all time finally ended after four hours, 53 minutes in College Station, Texas, but the wild party didn't stop when Aggies wide receiver Kendrick Rogers caught the winning two-point conversion from quarterback Kellen Mond in the game's seventh overtime. In fact, the pandemonium was just getting started.

After the game, two assistants on opposite sidelines were caught throwing punches on the field. According to The Advocate, Texas A&M staffer Cole Fisher, who is Jimbo Fisher's nephew, threw a punch at LSU analyst Steve Kragthorpe, which caused retaliation from LSU director of player development Kevin Faulk. As if the slugfest on the playing field wasn't enough, it would appear tensions boiled over into the postgame festivities.

The postgame altercation was under investigation by the Southeastern Conference, which had already been involved in sending down a hefty fine on Texas A&M University for the Aggie faithful who rushed the field after the legendary game. But come on, SEC. After a win like this, it sort of feels like you have to let it go. Heck, if I dropped 74 points on my little brother in Madden, I'm storming the living room, and there's nothing my Mom can do about it.

But there is a limit to what you can do on the field after your team wins a big game. No. 1 on that list is fisticuffs. 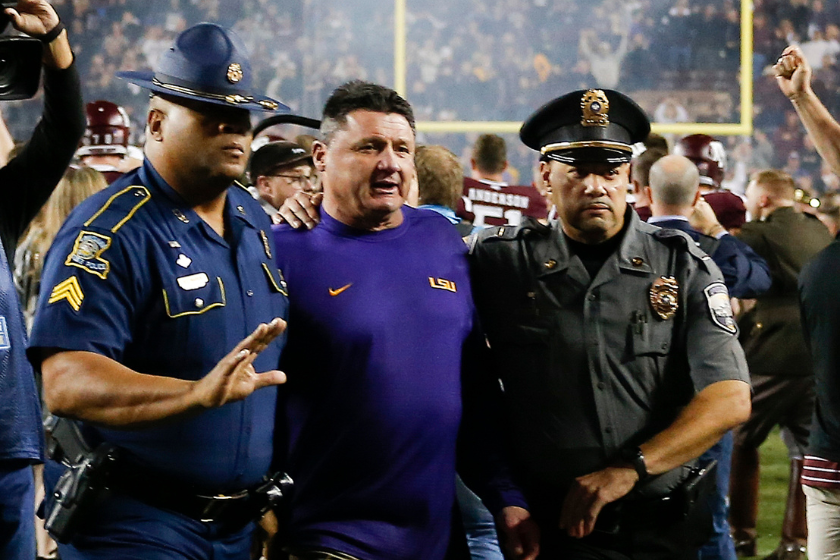 The SEC fined Texas A&M $50,000 as a result of fans storming Kyle Field. The fine, which was the first offense by the university and is standard operating procedure by the conference, is deposited into the SEC Post-Graduate Scholarship Fund.

"The [SEC] policy states that "access to competition areas shall be limited to participating student-athletes, coaches, officials, support personnel and properly-credentialed individuals at all times. For the safety of participants and spectators alike, at no time before, during or after a contest shall spectators be permitted to enter the competition area. It is the responsibility of each member institution to implement procedures to ensure compliance with this policy."

Financial penalties for storming the field are nothing new. Both LSU and Kentucky were fined earlier that season following fans storming the field after huge wins in Baton Rouge, Louisiana and Lexington, Kentucky, respectively. The second offense of fans rushing the field results in a $100,000 fine, which the Texas A&M Aggies received after beating Alabama in 2021, and a third offense will incur a whopping $250,000 fine.

Fights and fines aside, this was a massive win for a Texas A&M program that has set itself up to be a major College Football Playoff contender in the years to come, and nobody was more pleased with the outcome than Aggies head coach Jimbo Fisher.

RELATED: Hey SEC, It's Time to Stop Fining Schools For Rushing the Field

"I can't be happier for a group of guys and what they've shown -- the grit, the determination, the desire, the toughness, the effort, the discipline, the pride -- everything they have. They set a standard for what that Aggie helmet means, and hopefully we're getting to where that standard is, and we can grow from that because we want it to mean excellence and, I've always said this before, the people who put that ring on, we represent them... If you're not proud of those guys today, you can't be proud of anybody."

More than 101,000 college football fans watched history in College Station that Saturday night, and while it was a night to remember on the field, it churned out more than a few memories to forget after the game was over.

This article was originally published on November 26, 2018.