Pick Me a Winner: Predictions for Every SEC Team’s Bowl Game 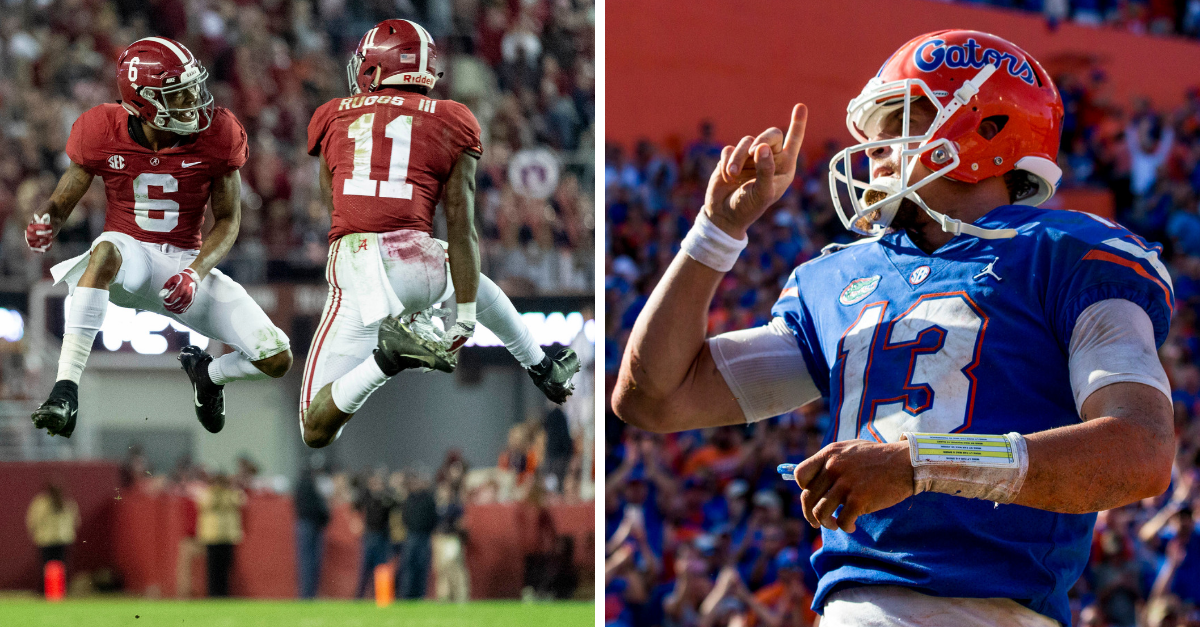 With the release of the final College Football Playoff rankings of the season, we now know that it will be Alabama facing Oklahoma in the Orange Bowl and Clemson meeting Notre Dame at the Cotton Bowl to decide the two representatives for the national championship game.

Aside from those three games, there are 37 more bowl games pitting eligible teams from across the country against each other. There are intriguing matchups everywhere you look, but with 11 of the league’s 14 teams playing in a bowl game, no conference will have more game to watch than the SEC.

Here are the projected winners for each SEC bowl game:

The Vanderbilt Commodores head to their second bowl game in five years under coach Derek Mason riding a stretch of three wins in their final four games. The Commodores never scored less than 28 points in those four to close the year, and they’ll need every single one taking on the Bears out of the Big 12.

Baylor quarterback Charlie Brewer does it all for this team. The sophomore has accounted for 2,901 total yards and 17 passing touchdowns while also leading the Bears in carries (117) and rushing touchdowns (6).

Expect Vanderbilt and senior quarterback Kyle Shurmur to come out on fire playing in memory of tight end Tucker Cockrell, who died after a long battle with cancer on November 29, and complete Vandy’s first winning season since 2013.

For head coach Gus Malzahn and this Auburn football team, the 2018 season went about as far south as they could go, capped off in a 52-21 drubbing at the hands of the Alabama Crimson Tide in the Iron Bowl. Still, the Tigers managed to sneak into a bowl game, but they’ll be getting one of college football’s giant killers this season.

The Purdue Boilermakers may only have six wins on their resume, but they were 3-0 against ranked teams — They beat Boston College, Iowa and, arguably the biggest win by any team all season, Ohio State. Led by senior quarterback David Blough (3,521 passing yards, 25 TDs) and superstar freshman Rondale Moore (2,048 all-purpose yards), this team is not going to be an easy win.

Auburn needs big games from quarterback Jarrett Stidham, and a defense ranked 18th in the nation allowing 19.6 points per game, to fend off a feisty Purdue team.

The Queen City awaits us for the @belkbowl vs. the Cavaliers 🤙 pic.twitter.com/kjGApdYaQq

Will Muschamp‘s team is heading to a bowl game for the third-straight season, but going 0-5 against ranked opponents doesn’t bode well for the long-term plans in Columbia. They’d do well to knock off the Virginia Cavaliers and finish the season in the 8-win club.

Head coach Bronco Mendenhall, aside from having one of the best football names in the game, clinched the Cavaliers’ first winning season since 2011 when they beat Liberty earlier in November, but the team lost three of its last four games in ACC play. Senior wide receiver Olamide Zaccheus did earn First-Team All-ACC honors after catching 82 passes for 973 yards this season.

This one should be fun, but with All-SEC wide receiver Deebo Samuel deciding to skip this game in preparation for the NFL Draft, this game could swing Virginia’s way in a hurry.

The Tigers will get to send senior quarterback Drew Lock (3,125 yards, 25 TDs) off for one final hoorah against an explosive Oklahoma State Cowboys team, and this could end up being one of the most fun bowl games of the postseason.

Together, these teams average a combined 75.3 points per game and 968.8 total yards of offense, both of which rank them in the top-20 nationally. The story here should be which defense stands tallest, and that award definitely favors Mizzou led by second-team All-SEC defensive tackle Terry Beckner Jr. (9.5 tackles for loss, 2.0 sacks).

Mizzouri head coach Barry Odom has built a solid program in his third season, and they’ll be looking to reach nine wins since Gary Pickel’s SEC East champion back in 2014.

While head coach Jimbo Fisher’s program might be coming off a historic seven-overtime win to cap their regular season by beating LSU, the Aggies are far from out of the woods taking on a dangerous NC State Wolfpack team that’s about as good as you can be and still not be ranked.

The Wolfpack have future NFL quarterback Ryan Finley (3,789 yards and 24 TDs) leading the charge alongside five total First-Team All-ACC selections on this offensive unit. The Wolfpack’s losses came to Clemson, Syracuse and Wake Forest, but they closed the year winning three straight games.

We know what the Texas A&M defense is capable of, but it’ll take solid games on offense from quarterback Kellen Mond and first-team All-SEC running back Trayveon Williams to keep the Aggies in this game.

TAMPA Bound! We will face @HawkeyeFootball in our first @OutbackBowl on New Year's Day!

Sometimes pitting two teams from opposite conferences creates unique matchups, but the Mississippi State Bulldogs and Iowa Hawkeyes are about as evenly matched as it can be.

The difference will be which offense can break through first, as Mississippi State allows the fewest points in the country (12.0) and Iowa allows the 11th-fewest (17.4). Both teams prefer to run the football to set up the pass, but Iowa quarterback Nathan Stanley (2,638 yards, 23 TDs) has the edge as a passer of Nick Fitzgerald.

Head coaches Joe Moorhead and Kirk Ferentz will be seeing double when these two programs clash, but it could be a trick play or bold call down the stretch that separates these two in the end.

One of my personal favorite matchups is this one in the Citrus Bowl pitting two teams that had College Football Playoff aspirations for much of the year.

For Kentucky, running back Benny Snell will be looking to etch his name into the Wildcat record book, needing 107 rushing yards to break Sonny Collins’ 43-year-old record for career rushing. On the other side, Penn State quarterback Trace McSorley needs 236 total yards to finish his career inside the top-5 in Big Ten football history.

The X-factor, though? How will Penn State handle SEC Defensive Player of the Year Josh Allen? The senior has 14.0 sacks, just one shy of tying the conference record for a single-season, and the Nittany Lions are 57th in the country allowing just over two sacks per game.

When two random teams face off in a bowl game, the game can sometimes be one that fans tend to forget. But what happens when an SEC team and Big Ten team square off for the third year in a row? Magic.

For the fourth time since 2003, the Gators and Wolverines will play in a New Year’s Day bowl game, but Michigan and head coach Jim Harbaugh have the momentum in this series having won the last four meetings. Last season, Florida was thumped by Michigan in the season opener, 33-17, but this team under Dan Mullen is a far-cry from last year.

This figures to be a battle between two teams that rank near the top of the country in both scoring defense and total defense, but whose offense will make the fewest mistakes?

All season long, UCF has been looking for a “prove it” game on their schedule to wow the College Football Playoff committee. Unfortunately, playing in the American Athletic Conference is not going to earn them the right, but back-to-back undefeated seasons with wins over an SEC school should silence doubters that this program is the real deal.

Without quarterback McKenzie Milton, the Knights’ 6th-ranked scoring offense (44.2 PPG) will be led by redshirt freshman quarterback Darriel Mack, who went off for six total touchdowns in the AAC title game.

The best two-loss team in all of college football is coach Kirby Smart’s Georgia Bulldogs, and they’re going to be itching to prove that they should deserve a spot in the College Football Playoff against Texas.

Knowing that fact, don’t expect the Longhorns to just roll over for the Bulldogs. Coming off their Big 12 Championship loss to Oklahoma, head coach Tom Herman will absolutely have this team fired up and ready to earn the program’s first 10-win season since 2009. Quarterback Sam Ehlinger (3,541 total yards, 38 total TDs) is the most serious dual-threat quarterback Georgia will face this year.

Both teams are looking to make a statement, but Georgia just feels like they’re two steps ahead as a program right now.

#CFBPlayoff Semifinal at the @OrangeBowl.

It’s the SEC champion versus Big 12 champion in the national semifinal, and this one could turn out to be the most exciting game all year.

Many people believe no team is more equipped to expose Alabama’s secondary than Oklahoma quarterback Kyler Murray, who is Tua Tagovailoa‘s only competition for the Heisman Trophy. Still, while Oklahoma and Alabama have two of the most explosive offenses in the country, this Sooners defense is 108th in total defense (448.1 YPG), and they allow 32.4 points per game.

This game needs to be a shootout for Lincoln Riley’s team to stay in it, but Alabama is just too dominant all around, and Nick Saban won’t let that happen with four weeks to prepare.

READ MORE: The AP All-SEC Selections Would Make One Heck of an NFL Team