SEC Studs & Duds: The Best and Worst Performers of Week 2 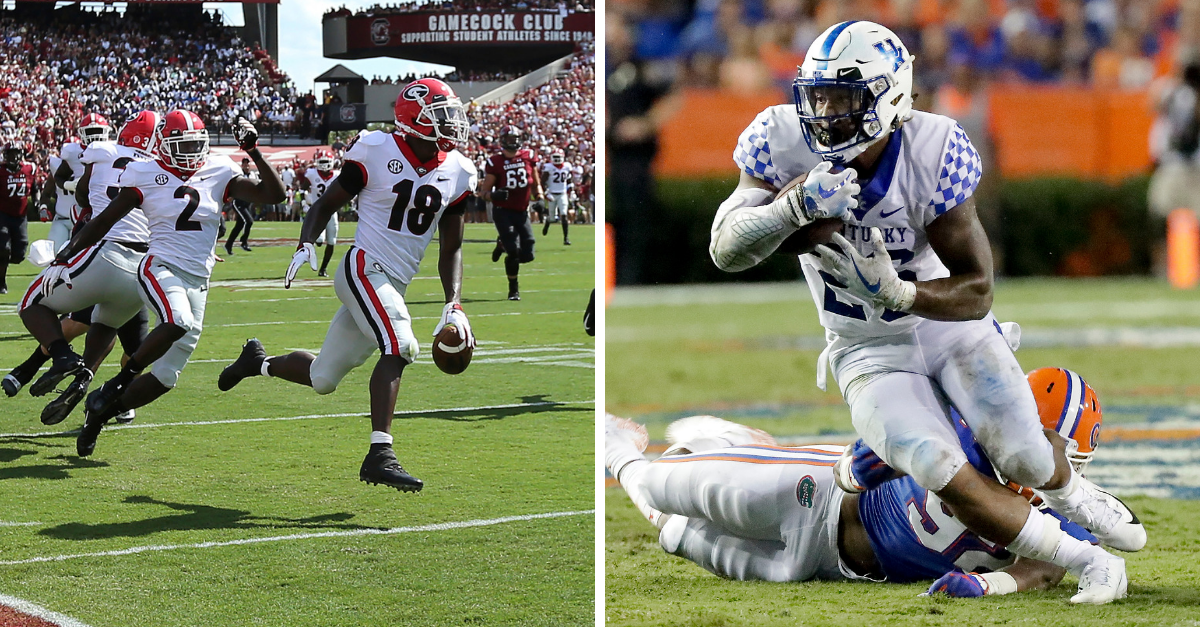 Week Two in the SEC included a few cupcake winners, an all-time streak ending, and best of all, our first divisional matchups of the young season. SEC football is proving once again that it’s fast, physical and can compete with any team in the country.

Last week, it was Mississippi State’s Keytaeon Thompson who stole the show, but it was the return of the Bulldogs starter that grabbed headlines this time around. There were great performances, there were duds all over the league, and this weekend proved that college football is as unpredictable as ever.

Here are the Studs & Duds from week two in the Southeastern Conference.

Mark Stoops Waives Davonte Robinson to the Endzone for the Nail-in-the-Coffin Touchdown!! An Amazing Finish, and a BIG Kentucky Win Over the Florida Gators!#UKvsFLA #GoBigBlue #Wildcats #SEC #KentuckyFootball pic.twitter.com/k0aILLsYZD

For 31-straight games, starting in 1987, the Kentucky Wildcats had not beaten the Florida Gators. That span included a 73-7 embarrassment in 1994 and a 63-5 stinker in 2008. On Saturday, the Wildcats did the unthinkable.

On the legs of running back Benny Snell‘s 175 rushing yards, Kentucky held off a late run by quarterback Feleipe Franks and the Gators’ offense in one of the weirdest walk-off touchdowns you’ll ever see.

Apparently, nobody but Kentucky head coach Mark Stoops remembered that if the whistle doesn’t blow, then the play continues. Safety Davonte Robinson scooped up a loose ball and scored to cap off the Wildcats’ first win over Florida in three decades.

The Wildcats have a favorable SEC East schedule moving forward, and this monkey off their backs might be setting up for a special season in Lexington.

The Arkansas Razorbacks entered their game against Colorado State as a 14-point favorite. If you allow the Rams’ high-powered offense to get on a roll, you’ll be hard-pressed to slow them down at any point.

What happened was Arkansas’ offense managed to jump out to a 27-9 third quarter lead, despite quarterback Ty Storey laying an egg and completing just 5 of 13 passes for 36 yards and two interceptions.

Then, as the Razorbacks through the game into cruise control, CSU quarterback K.J. Carta-Samuels and the Rams rattled off 25 unanswered points, scored the game-winning touchdown with eight seconds left, and sent Arkansas home to lick their wounds.

The Razorbacks had this one in the bag, and now, they’re headed back east to regroup after an ugly loss.

Kellen Mond rose to the occasion yesterday for Texas A&M, throwing for 430YDS and 3TDS, including this beauty 😍 pic.twitter.com/0poOl7pdvk

Facing an NFL-caliber defensive front and the second-ranked team in the nation, sophomore quarterback Kellen Mood silenced all doubters, and he’s solidified himself as the starter in College Station.

Mond shined on Saturday night, throwing for 430 yards and three touchdowns, as he willed the Aggies to 13 unanswered fourth quarter points before falling just a two-point conversion short of tying the Clemson Tigers.

His throw with under a minute left to cut the deficit to two points is one of gutsiest throws of the college football season so far.

He didn’t get the win, but Mond proved that Texas A&M and Jimbo Fisher are for real, and they can play down to the wire with the best teams in the nation.

The Gamecocks’ All-American enjoyed poking fun at the Bulldogs earlier in the week, but all he did was watch as No. 3 Georgia rolled their SEC East opponent on Saturday.

Samuel’s highlight of the day came on a trick-play touchdown pass to Bryan Edwards in the first quarter. Otherwise, the senior wideout managed only six catches for 33 yards as South Carolina managed only 17 points at home in what might have been their biggest game of the season.

Georgia’s All-American cornerback Deandre Baker, who Samuel trolled in the days leading up to the game, picked off a first-quarter pass that should have been a touchdown, had he not dropped the ball prior to crossing the goal line.

Baker and Georgia got the best of Samuel and South Carolina, and Deandre made sure Deebo remembers his name from now on.

The Bulldogs were on upset alert heading to Manhattan, Kansas to take on Kansas State, but Mississippi State’s battery of quarterback Nick Fitzgerald and running back Kylin Hill went out and delivered another win.

In his first game back from suspension, Fitzgerald racked up 313 total yards, including 159 on the ground that added another 100-yard game by the quarterback to extend own SEC record.

Hill ran wild on the Wildcats, racking up 211 rushing yards on 17 carries and scoring three times, including a 17-yard touchdown catch from Fitzgerald for Mississippi State’s first touchdown of the day.

Both Hill and Fitzgerald finished in the Top 10 in rushing in the nation this week. Joe Moorhead’s offense looks scary good early in the season, and it has his team off to a 2-0 start.

I’ve seen this look too many times… Welcome to the Dan Mullen era!!!! pic.twitter.com/Fv5ky3509f

For 13-consecutive seasons, the Florida Gators had won their conference opener. In 31-straight games, Florida had never lost to Kentucky. On Saturday, both of those streaks ended.

Dan Mullen‘s six-year contract includes an annual $6 million salary. What’s even more concerning than a loss to Kentucky is Mullen’s abysmal 7-32 record against AP Top 25 opponents.  If you think he’ll last in Gainesville losing to a divisional opponent like this, you’re sadly mistaken.

Florida is in rebuild mode, but this is about as bad of a start as you could ask for in the Dan Mullen era. It’s week two, and Mullen is already under the microscope at Florida.

READ MORE: Absurd Speed: Georgia Has 9 Players Who Can Run Faster Than 20 MPH