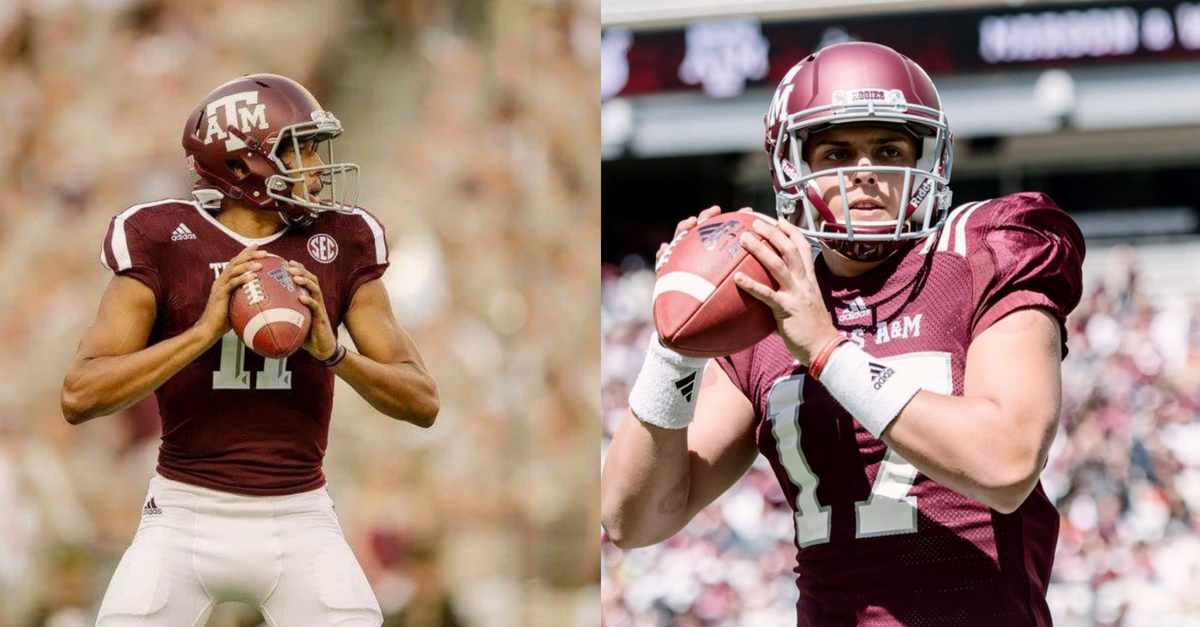 Take it from Jimbo Fisher, a head coach with a high level of expertise on the matter — if your quarterback is not the toughest guy on the team, then the team will not be tough. That doesn?t seem like rocket science, but it sure doesn?t give any indication on who starts at signal caller for Texas A&M this season.

Kellen Mond or Nick Starkel? Nick Starkel or Kellen Mond? The debate has raged on the entire offseason. It?s an interesting situation, to say the least, but don?t expect any sort of answer from the first-year Aggies coach anytime soon leading up to the 2018 season.

Fisher stood at the podium at SEC Media Days at the College Football Hall of Fame in Atlanta for approximately 30 minutes and never once did he even utter either?s name. He just decided to talk about the characteristics of his former great quarterbacks, such as E.J. Manuel and Heisman Trophy winner Jameis Winston at Florida State, and what the toughness he looks for.

?When that quarterback is tough and he is competitive and they know how he can make the plays, to me, it energizes your defense because they know if they get the ball back to him one more time, he can make a play.

Then, following all of that, Fisher tipped his hand ever so slightly. He repeated the phrase ?certain level of arm talent? with what he looks for in evaluating position.

Still, that doesn?t get anyone any closer to knowing who will take the first snap for the Aggies on Friday, August 30 against the Northwestern State Demons at Kyle Field.

Both Mond and Starkel are sophomores. Each has starting experience, and only one starting job is up for grabs in College Station.

Starkel, a 6-foot-3 pro-style quarterback, was the starter last season before being injured in the season-opening game against UCLA.  He then returned in late October and started the last four games, including the Belk Bowl loss to Wake Forest.

Mond, a 6-foot-2 dual-threat quarterback, started eight games in Starkel?s place and showed flashes of brilliance as a true freshman.

In the annual spring game, Fisher?s first real display as the Aggies head coach, Starkel finished 26-for-42 passing for 373 yards with two touchdowns and one interception, while Mond was 19 of 26 for 180 yards with three touchdowns during the White team?s 30-24 win over the Maroon.

?There?s no way that we can name a starter right yet,? Fisher told ESPN. ?It?s too early? because we?re just really now getting into the offense, as far as the fine-tuning and the nuances of it that really makes it go, because they just haven?t had enough time to learn it.?

That?s fair. Fall camp is where the starting quarterback competition should be won anyway.

But is there a leader heading into fall camp?

Mond is there, but Starkel is nowhere to be found, which might just be coincidence, but still intriguing.

Also, let?s say Mond, clearly the better runner, gets the nod over Starkel, the better passer? Can Fisher keep them both happy? Or will one decide to transfer for the opportunity to play?

Fisher has masterfully dealt with quarterbacks in the past, but this battle is one that can potentially split a fan base, and he better hope the one he picks wins games in the SEC or this will be an even bigger mess than it already is.