Will Muschamp Whiffed, and Now South Carolina Has a Huge Problem 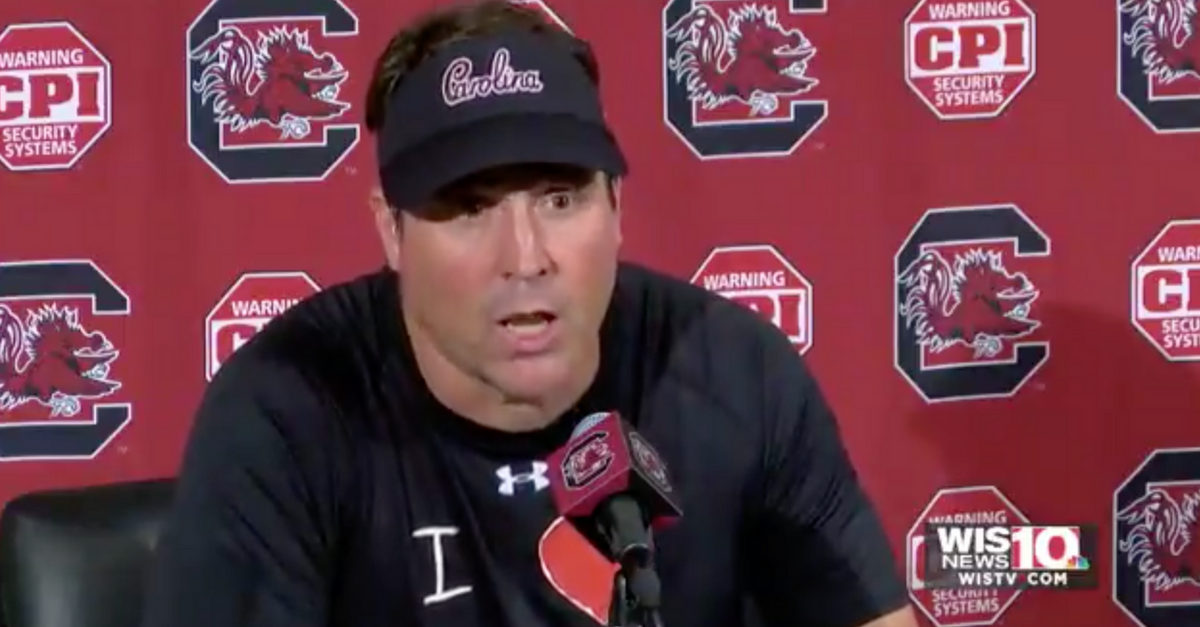 On June 13, 19-year-old offensive lineman Jordan McNair died after suffering a heatstroke during a workout with the University of Maryland football team two weeks earlier. In response, Billy Murphy Jr., the lawyer for McNair’s family, is calling for Terrapins head coach DJ Durkin to be fired immediately. Durkin is currently on administrate leave from the university, who has publicly accepted responsibility for McNair’s death.

Durkin and his staff are accused of leading an abusive culture and failing to properly react after McNair became visibly ill on the practice field. The problems surrounding the alleged abusive culture of the Terrapins program are extending far beyond College Park, Maryland.

University of South Carolina head coach Will Muschamp was asked about McNair’s death, and how his staff handles the fine line between the proper training of players and pushing players too far that now has Durkin in serious trouble.

It’s important to note that Durkin is a former assistant under Muschamp at Florida from 2012-14.

The Gamecocks head coach, rather than offer condolences to the player who died in his friend’s care, defended his old pal and condemned the media’s anonymous sources leading to the investigation into Maryland’s program.

All Muschamp did in this heated response was back up the problems surrounding the abusive culture of college football.

#Gamecocks @CoachWMuschamp delivered a fiery response to a question about an @espn story, which portrays the Maryland football program under DJ Durkin in a bad light. Durkin used to work w/ coach. "There’s no credibility in anonymous sources. I think that's gutless." @wis10 pic.twitter.com/ny60Xb8jIO

Muschamp is entering his third season as Gamecocks leader, and these comments, none of which expressed any reluctance to say that Durkin’s staff was wrong, or to even mention McNair’s death, is terrible etiquette.

One comment, in particular, raises an eyebrow from someone who lives and breathes media relations.

“There?s no credibility in anonymous sources. You know, if that former staffer had any guts, why didn?t he put his name on that? I think that?s gutless. And in any business and in any company and in any football team, especially right here in August, you can probably find a disgruntled player who?s probably not playing. So, I think it?s a lack of journalistic integrity to print things with anonymous sources.”

No major news has ever been broken, and serious problems have never been brought to light, without a journalist being able to protect the names, careers, and, in cases outside the sports realm, the lives of people who challenge power world.

Anonymous sources lead to change because someone has to speak up. It’s a journalist’s responsibility to properly report, follow up and protect those individuals.

For Muschamp to glaze over a young man’s death, and instead defend his friend, is downright cold-blooded.

It goes to show that Muschamp values a fellow coach’s career more than the truth.

There’s a big difference between establishing toughness and outright abuse. College football coaches enjoy a massive amount of unchecked control. So, of course, Will Muschamp believes the real problem is anonymous sources.

I just lost respect for Will Muschamp. Anonymous sources took down Richard Nixon and many other important people. A young man died at Maryland and he said nothing about that. Really bad take. https://t.co/C48g7eDQvB

College football has a huge culture problem as it is. Players are used by universities for the ability to bring in millions of dollars putting their bodies on the line, and they don’t get a fair share of the profits as it is.

Coaches have a responsibility to protect these kids, but in cases like Durkin and Maryland, that line between protection and aggression becomes blurred.

Durkin is already in hot water, and now Muschamp has dug himself into a hole.

At some point, this game has to be about the kids, not the million dollar coaches who wear them out like a fresh set of Goodyear tires.