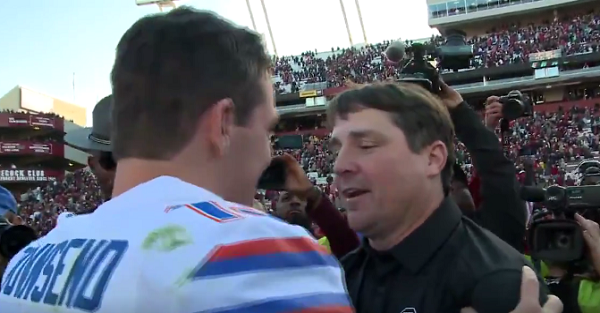 Will Muschamp is at South Carolina now after spending a few years at Florida and being let go by the Gators after not meeting expectations. However, he had a ton of fans inside and outside the locker room as evidenced by all of his former players coming up to him after the game despite a 28-20 loss:

Nice scene after the game as Will Muschamp & some of his former players & friends from Florida come over to wish him well. SC def the Gators 28-20, moving to 5-3 in SEC play & 7-3 overall record. Muschamp was HC at Florida from 2011-2014. #football #sec #coach pic.twitter.com/OKl66dyegh

He showed a lot of class by not only greeting all of them, but giving them some words of encouragement in light of losing their coach this season. He even said he’s sorry to some of the players and told them to “hang in there” before he left the field.