5 Things We Learned on Opening Night of SEC Basketball 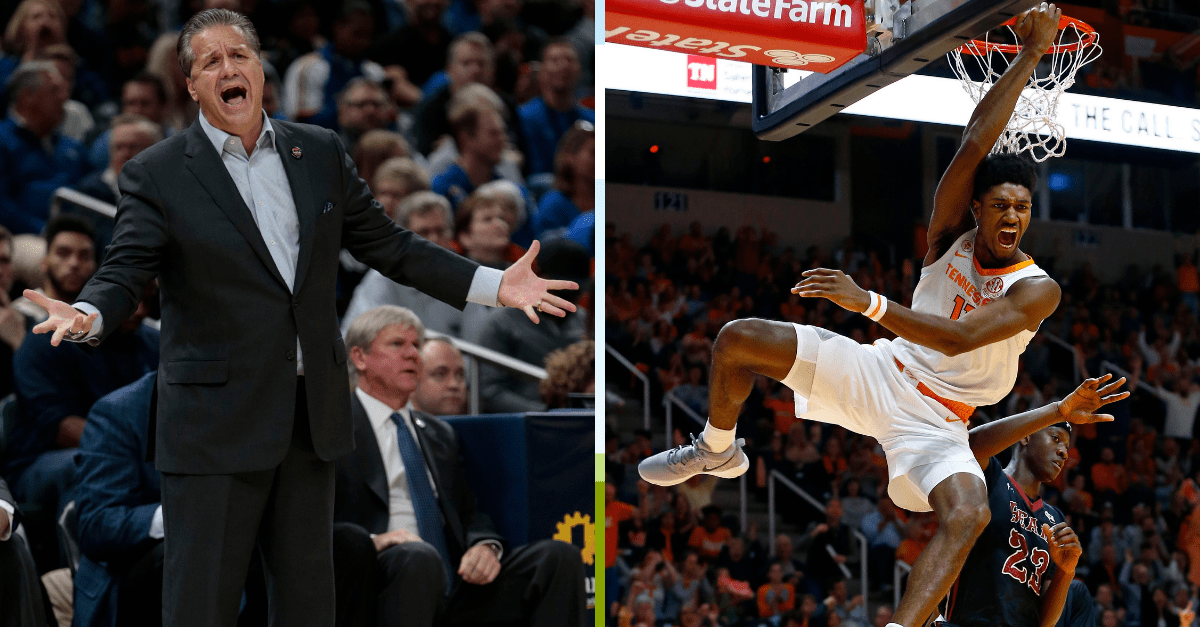 We might be in the heart of an all-around fantastic college football season, but that doesn’t mean we can’t enjoy the best of both worlds, right? The college basketball season tipped off last night, and the hype surrounding March Madness can now officially begin.

While Duke’s Zion Williamson burst on the national stage in a dominating win over John Calipari and Kentucky, the Southeastern Conference, which has five teams ranked in the AP Top 25 and sent eight teams to the NCAA tournament last season, flexed their muscle on opening night. Here are five things we learned as the college basketball season is finally underway:

1. Tennessee is a Legit Contender

While the one-and-done era of college basketball firmly keeps developed talent out of the spotlight, the Tennessee Volunteers have five starters who are all juniors or seniors, and they’re led by a pair of All-SEC players poised to help the Vols flip the script on their early-tournament exit to Loyola-Chicago last season.

Senior guard Admiral Schofield and junior forward Grant Williams lead the Vols into the 2018-19 season with high expectations for the preseason No. 6 team in the country. In an opening night win over the Lenior Rhyne Bears — not exactly the most fearsome of opponent —  all five Volunteers starters scored in double figures with Schofield grabbing nine rebounds to go along with 13 points, and Williams filling it up scoring 13, shagging seven rebounds and recording five assists.

The Volunteers have the experience to improve from last season’s share of the regular season SEC title and make a deep run when March rolls around.

2. Auburn is Primed to Win the SEC

The Auburn Tigers, the defending SEC regular season champs, poured in 101 points against the South Alabama Jaguars in a convincing win Tuesday night, but it was Jared Harper who stole the show.

The preseason Second-Team All-SEC guard scored 20 points on 7 of 13 shooting, including six 3-pointers to go along with his 13 assists and five rebounds. The 5-foot-11 junior averages in double-digit scoring through his first two seasons at Auburn, and he paced the Tigers all game long in rout to a monster night.

Auburn is the 11th-ranked team in the AP Poll, and with an experienced roster and Harper’s backcourt running mate Bryce Brown back, another All-SEC performer, Bruce Pearl‘s team is going to compete every night, and they’re looking to do more than just win the regulars season crown in 2019.

Felt great to be back on the court last night 😈 pic.twitter.com/X9jmxCmZB0

The LSU Tigers and head coach Will Wade knocked off Southeastern Louisiana 94-63 on opening night, and their four freshman proved they’ve got some game in Baton Rouge.

Naz Reid, Emmitt Williams, Darius Days and Ja’vonte Smart all scored in double figures with Williams notching a double-double with 10 rebounds. Not to be outdone, junior Marlon Taylor, who transferred from Panola College in Texas this offseason, scored 15 points in 15 minutes off the bench. Plus, preseason All-SEC guard Tremont Waters only needed to score nine points on 3-of-7 shooting in the win.

No. 23 LSU is playing this season for Wayde Sims, who was killed in a shooting back in late September. The Tigers have a lot to prove with a young roster, but expect this team to win a lot of games in the SEC.

4. Darius Garland is an SEC Player of the Year Candidate

While bigger names take their talents to more prominent basketball schools, Darius Garland stayed home in Tennessee and proved why the five-star recruit was the top-rated player in the state.

Garland poured in 24 points on 9 of 15 shooting to lead all scorers in Vanderbilt’s 92-79 win over Winthrop, and Garland’s balance inside and outside as a scorer stood out in a big way. The Commodores saw all of their starters score 12-plus on the night, including an 18-point and 10-rebound night from impact freshman Simisola Shittu, who paired with Garland forms an incredible duo.

He was already named All-SEC second team, and the highly-touted freshman from Brentwood Academy (TN) is poised to make some noise with the Commodores in 2019.

Yeah, they were trounced by an incredible Duke Blue Devils team, but the Kentucky Wildcats are still the most talented roster in the conference.

Lost in the sauce of the Zion Williamson show were senior Reid Travis’ incredible efficient 22 points on the night and freshman Keldon Johnson’s team-high 23 points. PJ Washington, who declared for the NBA Draft but returned for his sophomore season, got off to a slow start scoring only eight points, but the preseason First-Team All-SEC player will be a major factor most nights.

John Calipari’s team has something they haven’t had much recent memory: experience. The Wildcats got caught in the Duke hype machine, and that’s exactly what they needed. They’ve been humbled early, and now they can focus on making their way back to mountaintop.