We are only two weeks into college football's return and there has been no shortage of spectacular plays.

Sure, you expect flashy things to come out of the SEC and the BIG Ten, but I bet you didn't expect to see a 77-yard touchdown pass from...*checks notes*..ARMY?! 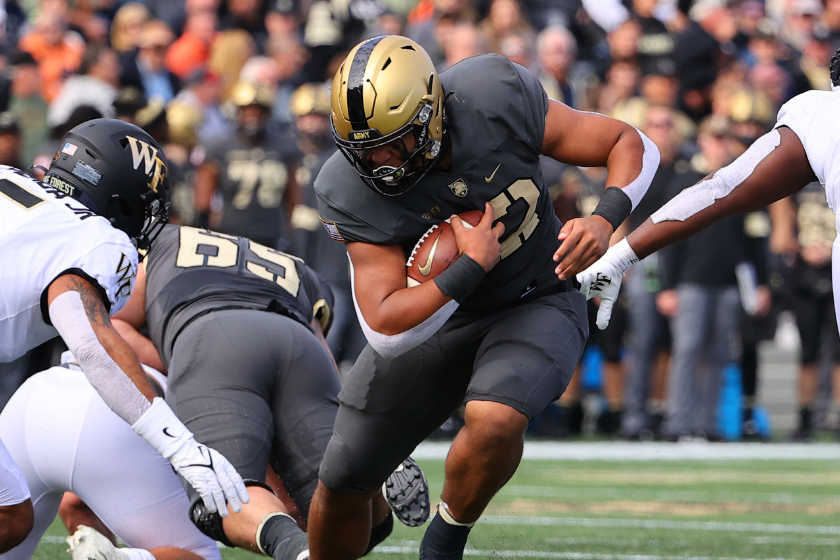 While most of the country was watching Alabama try to put out another Colt McCoy-type hit out on Texas in the first half, the Black Knights made a statement by going deep and showing off their potent offense with five and half minutes left to go in the first quarter. At the time, the Black Knights had three passing plays of 50 yards or more already in the game, which outnumbers their total from last season. That's some serious growth, besting a last season statistic before halftime in Week 2.

Army wide receiver Tyheir Tyler replaced Army quarterback Cade Ballard, who took over for Christian Anderson, and connected with fellow wide-out Ay'Juan Marshall for the long touchdown on his first and only pass of the game as West Point completely caught USTA on their heels. Marshall could have army crawled his way to endzone if he wanted to.

Although, UTSA would go on to win the game, 41-38, Army still touted a finely-tuned aerial attack, with Ballard amassing 221 yards through the air, connecting with seven different wideouts from West Point, New York.

Is This a New Black Knights Strategy?

UTSA defense doing a good job of limiting Army in the running game. The passing game is another story. Army is 4 of 4 for 165 yds with a 77 yd TD. Army leads 14-7 late in the first half.

The Black Knights went 9-4 overall last year and can play spoiler as an independent to many conference contenders especially if they can keep their offense up in this way. They've certainly not been known for their passing game in the past, but it appears that they may be turning a new leaf and moving away from a rush-heavy offense.

Head coach Jeff Monken is in his 9th season at Army and while they are off to a slow start record-wise, with a tough schedule ahead of them. However, this explosive offensive start might just be the spark that they need. The Armed Forces bowl might look very different this year should the Black Knights continue trending upwards, especially if Navy and the Air Force can't figure out how to put the ball in the air.

On the other sideline, head coach Jeff Traylor and UTSA have a chance to repeat as Conference USA champions after going 7-1 against conference competition and 12-2 overall during the 2021 regular season. The Roadrunners will face a tough road game in Austin against a resilient and tough-to-beat Texas team that is coming off a tough last-minute loss to Alabama.