The year 2007 was the one you didn't want to be the No. 2 ranked team in college football. The reason? It was cursed. There was a nine-week stretch where the second-ranked team in the land lost seven times. USC, Cal, South Florida, Boston College, Oregon, Kansas and West Virginia fell while holding the spot. Teams held their breath every Sunday as the new rankings were released knowing a No. 2 ranking inevitably meant you were losing the next week whether you were playing Southwestern Metro Tech or Ohio State.

Let's rewind a second, though. Your eyes aren't deceiving you. Yes, that is THE University of Kansas listed among the top teams in college football that year. Surprised? Couldn't be me.

The Kansas Jayhawks have made 12 bowl games since 1901. They've had two winless seasons since 2015. Lawrence is a football town through and through, and everyone knows Memorial Stadium is the last place you want to play. Just take a look at the Jayhawks this year. Head coach Lance Leipold has KU off to a 5-0 start, including a 2-0 record in Big 12 play with wins over West Virginia and Iowa State. Jalon Daniels is a dark horse Heisman candidate.

The hot start is bringing back shades of '07, the last time Kansas made its mark on the national scene. 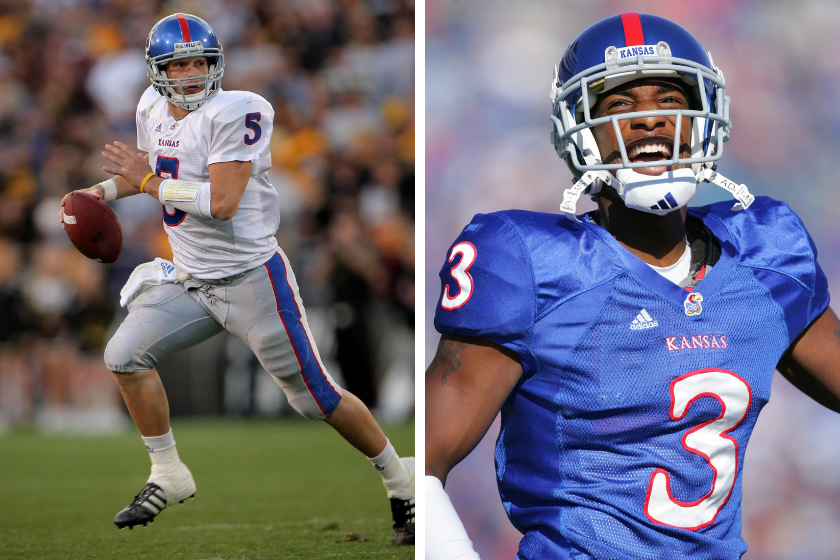 The offensive mind of head coach Mark Mangino took the KU offense to new heights in 2007.

In wasn't just the offensive skill players who carried the team, though. Cornerback Aqib Talib, defensive tackle James McClinton and linebacker Joe Morenson anchored the defense. The D gave up a combined 23 points in those four games.

But so what? They beat Central Michigan Southeastern Louisiana, Toledo and FIU. Big deal. Well, the Jayhawks brought that momentum with them to Big 12 play, too. They beat Kansas State in a nail-biter, crushed Baylor, pulled out close ones on the road against Colorado and Texas A&M, smoked Nebraska, beat Oklahoma State in Stillwater and demolished Iowa State.

Ok, anyone can list wins, but I have some first-hand experience with this Kansas team. I went down to Lawrence to see KU square off against Nebraska. This was a particularly special Nebraska team because it was the final year of the Bill Callahan era. Morale couldn't have been higher. The defense was like Swiss Cheese and quarterback Sam Keller was playing ahead of a guy clearly better than him in Joe Ganz and throwing 50 times a game -- a Nebraska tradition unlike any other. KU ended up winning 76-39. Yeah, say what you want about Kansas, but I say holding them under 80 was a victory.

The KU offense is what I remember most about this team. Todd Reesing could absolutely deal. They distributed it all over the field and had the playmakers to make you pay. Every time I looked up they were scoring a touchdown.

Let me tell you, there is nothing, and I mean nothing, like the shit-talk a team you beat 99.99 percent of the time chirps after crushing you once. I was in seventh grade and a drunk college student called me a nerd and gave me a noogie. I told him if he's a real man, he'll meet me on Xbox Live later.

Anyway, Kansas entered the final game of the regular season against archival Missouri with a spot in the Big 12 title game on the line.

The 2007 Border War: Kansas vs. Missouri 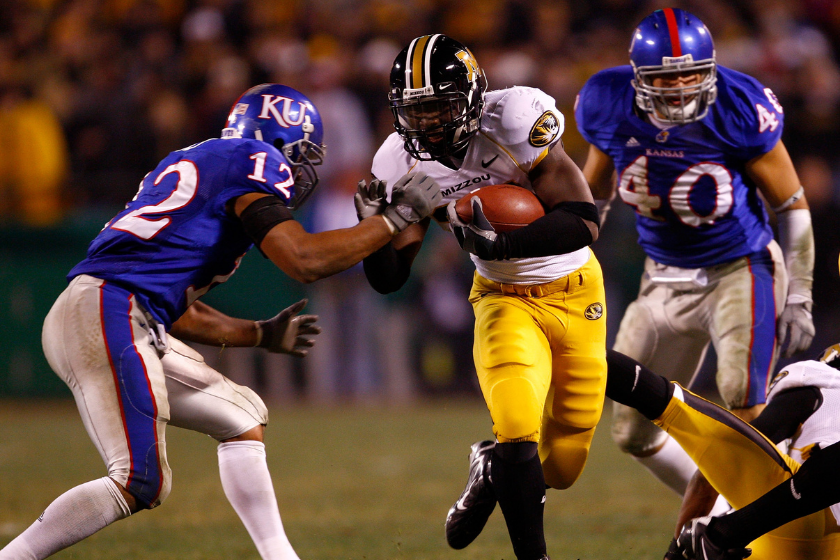 Arrowhead Stadium in Kansas City, Missouri served as the host for the biggest college football game of the year. No. 2 Kansas and No. 3 Missouri battled to keep their national championship hopes alive and for a spot in the Big 12 championship. In a thrilling game, Mizzou quarterback Chase Daniel completed 40 of 49 passes for 361 yards and three touchdowns. On the other side, Reesing went 28-for-49 for 349 yards, two touchdowns and two interceptions.

Missouri won 36-28 to hand KU their first loss of the season and book a trip to the Big 12 Championship Game against Oklahoma. The dozens of Kansas football fans can take solace in Mizzou getting crushed by the Sooners 38-17. And, even though they didn't compete for a Big 12 title and their national title hopes were shot, KU did make history in the Orange Bowl against Virginia Tech. 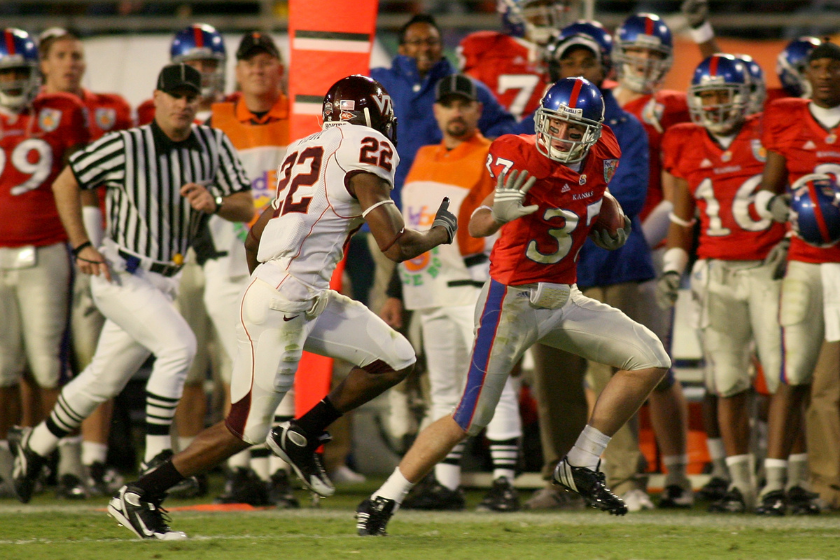 Despite being three-point underdogs, having a media circus surrounding them because of their controversial selection and a high-powered Virginia Tech offense led by Sean Glennon and Tyrod Taylor, Kansas topped Virginia Tech 24-21. The defensive effort of KU, spearheaded by cornerback Aqib Talib and his 60-yard pick six, halted the ACC champion Hokies in their tracks. Reesing performed well like he did all season, too, throwing for 227 yards and a touchdown.

The win was KU's first and only BCS bowl win in program history. Remarkably, it's also their second to last bowl appearance behind the 2008 Insight Bowl.

So, just how did they pull off their 12-1 season? The perfect storm of offensive and defensive balance. KU's offense was the second-ranked unit in the country while the defense was fourth. Their point differential was a healthy 26.4. The collection of talent obviously played a huge part, too. Reesing came out of left field and lit up defenses and was protected by All-American tackle Anthony Collins. Talib, an All-American himself, went on to have a great NFL career that included a Super Bowl, a First-team All-Pro nod and five Pro Bowl appearances. Plus, Mangino was in his sixth season and had time to establish his system. It all came together in 2007.

The '22 team appears to be on their way to another historic run, and they already have as many wins as their best season over the past 13 years. But the 12-1 season in 2007 will always be special in Lawrence AKA Football Town USA.