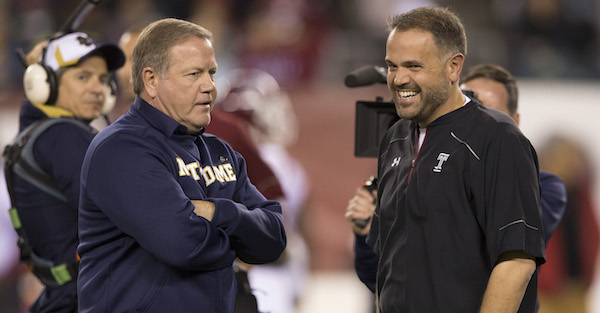 Baylor coach Matt Rhule had reportedly interviewed for the open Indianapolis Colts head coaching job earlier in the week. However, it appears that he is not interested in taking over an NFL team, at least for right now.

#Baylor coach Matt Rhule, following an interview with the #Colts, has informed the team that he elected to remain with his school, source said. … Yes, he has rhuled Indy out.

It?s not uncommon for college coaches to interview for NFL positions, but Rhule just finished his first season at Baylor, and the Bears were 1-11 in 2017.

To be fair to Rhule, he inherited a messy situation in Waco, so the 1-11 campaign isn?t necessarily an indictment of his coaching skills.

Before taking over at Baylor, Rhule turned the Temple program around rather quickly. He went 2-10 his first year at Temple, and then he followed that up with a 6-6 season and back-to-back 10-win seasons and a conference championship.

Rhule, 42, was also the offensive line coach for the New York Giants in 2012.

Naturally, getting back to the NFL might be a little easier in that he won’t have to worry about recruiting or pleasing boosters — trading them out for owners and a GM. However, if Rhule can turn around the Bears in the next year or two and get them back to being respectable he could make a bigger and better name for himself in coaching circles going forward.