It's a fact that Oklahoma is a hotbed of collegiate softball powers. In 2022, they've completely overwhelmed opponents with great pitching and hot bats. That's why the Cowgirls are in the semifinals of the College Softball World Series. 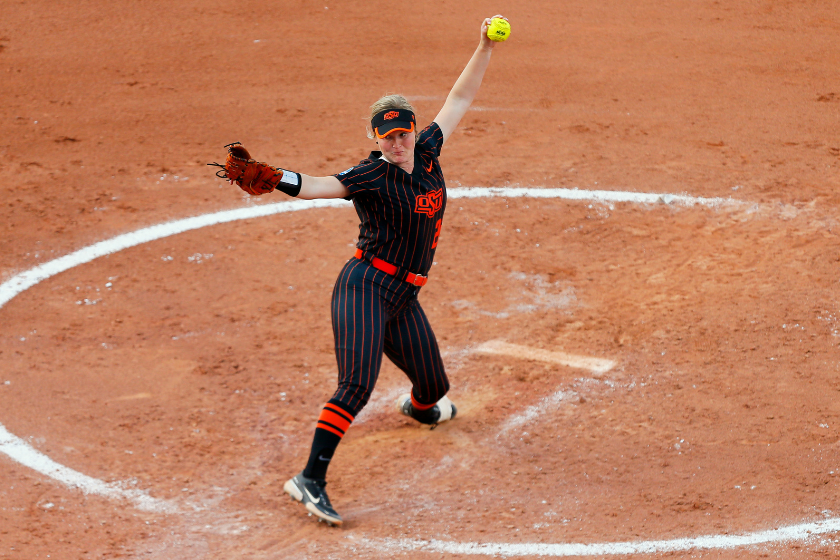 Kelly Maxwell was named an Under Armour All-American as a sophomore at Clear Springs High School in League City, Texas. Seeing that she had the potential to become a superstar, she packed her bags and headed to Stillwater, Oklahoma, where she spent her freshman year red-shirted.

Maxwell's collegiate career at OSU began in 2020 with a bang, as she threw a five-inning perfect game against Florida A&M in her debut. The rest of her first season didn't stay as pristine, but it's still pretty solid. The Friendswood, Texas, native pitched 46.1 innings, 11 appearances in the circle, with eight of those appearances being starts. After sitting out her first year at Oklahoma State, Kelly's first campaign as a pitcher ended with four complete games and a 6-3 record, all the while holding a 1.51 ERA. Not too shabby, but Kelly wasn't satisfied.

In 28 appearances, 19 of which were starts, the Cowgirls ace posted a 15-5 record, 1.81 ERA and fanned a whopping 147 hitters, while holding their bats to a .174 average. Multiple double-digit strikeout games, two no-hitters, a combined perfect game, but maybe the most telling stat of hers is how she began the season.

For the first 25.2 innings that Maxwell pitched for the Cowgirls in 2021, not a single runner crossed home plate. Unfortunately, things happen, and an unearned run squeaked in to snap her streak, but it would be another 11 innings before an earned run would cross the plate against Maxwell, bringing her final scoreless streak to 35.2 innings. Wow.

Surely she can't top those numbers in 2022, right? 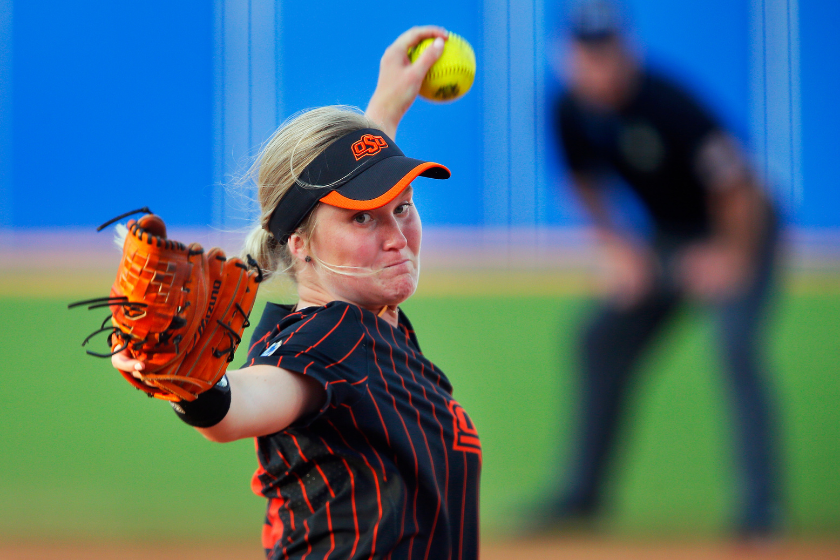 Look, I could walk you through all of Maxwell's accolades from the 2022 season, but it's easier to see them in list form. Why? Because no words I have can paint a clearer picture of her dominance than this:

Need more proof? You got it.

After losing to Cinderella story James Madison in the second round of the 2021 WCWS and then being eliminated from the tournament by Florida State, Maxwell and the No. 7-ranked Cowgirls weren't going to allow themselves to be sent home from Oklahoma City so easily in 2022.

Facing off against unranked Arizona in the first round, Maxwell took the ball and tossed a gem, striking out 14 Wildcat batters as she led Oklahoma State to a 4-2 win. To make things worse, Maxwell and other players were subjected to random drug tests following the game, but Maxwell was only able to rejoin her team around 3:15 a.m. following after retesting following her initial inconclusive test. Talk about a wild 24 hours.

At a press conference the next day, OSU head coach Kenny Gajewski stated his annoyance with the process of the testing, but not the testing itself. "I'm not mad at anyone. I just know this process needs to probably be looked at to see if we maybe can do it in the mornings of game days or something. The first games, no problem, right? They are done. But we have a long game, we start a half an hour late, then we go through this deal. It's rough."

In the second round, Maxwell was even better. The No. 14-ranked Florida Gators didn't stand a chance thanks to the suffocating pitches coming from the circle. After the dust cleared, the Cowgirls' ace finished the game with nine strikeouts and two walks after only surrendering three hits in the seven-inning shutout. That win brought Oklahoma State within one win of playing in the Championship Series, a feat that Oklahoma State Softball has never been able to accomplish.

However, with Chyenne Factor in the box and Maxwell on the mound, it appears that anything is possible.