Heartbroken Jalen Hurts After CFP Loss: “I Can’t Come Back and Fix It” 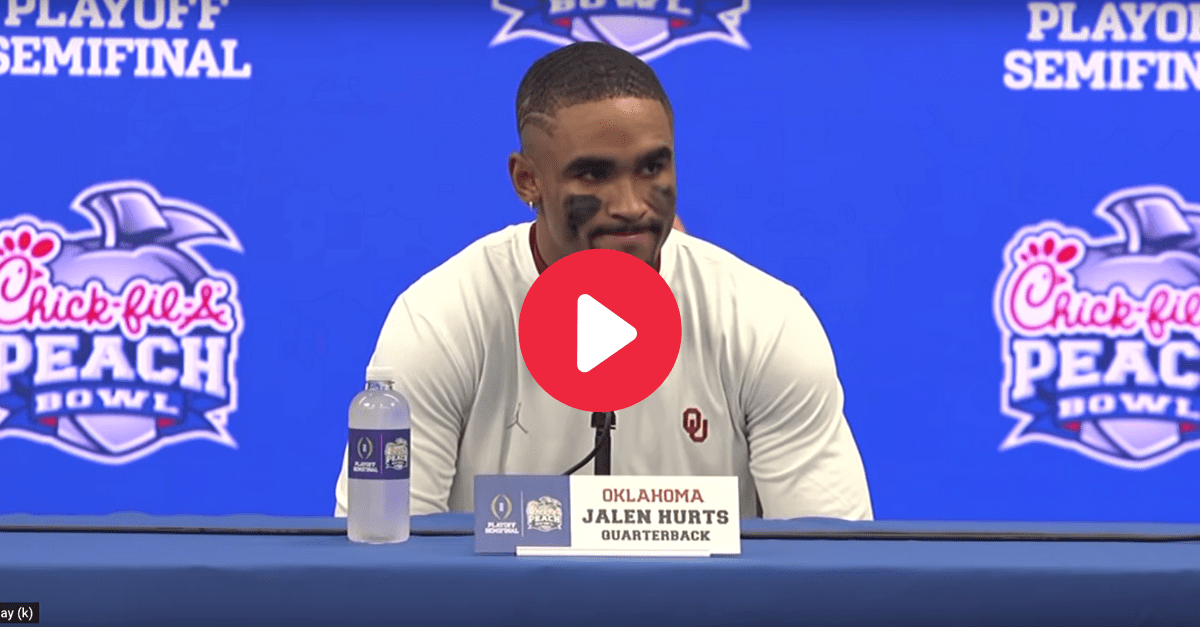 On the first play from scrimmage, Oklahoma quarterback Jalen Hurts was sacked. That opening drive was one of four three-and-outs for the Sooners’ typically prolific offense in the first half, and the LSU Tigers were too hot to handle the rest of the Chick-fil-A Peach Bowl.

Seven touchdown passes by LSU quarterback Joe Burrow put the College Football Playoff semifinal game way out of reach by halftime, and one of the most beloved college football players in recent memory helplessly played from behind in his final game. Hurts earned his way into Heisman Trophy contention in 2019, but his final collegiate action ended short of the ultimate prize.

Head coach Lincoln Riley’s offense managed only 28 points while giving up 63 points and a CFP record 692 yards of total offense to Ed Orgeron’s team. Hurts finished the playoff game matchup 15-of-31 for 217 passing yards and one interception, then added 43 rushing yards to two touchdowns on the ground.

During his postgame press conference at Mercedes-Benz Stadium, Hurts reflected on his collegiate career and his biggest regret, which was not winning a national title for his head football coach and the Oklahoma football fans.

“It’s hard to just sit here and reflect on four years, the whole year with my brothers this year all of that, right now. It hurts me, you know, you talk about how much it means to you and the team. It’s supposed to hurt. This is not a good feeling. This is a feeling I’ve never felt before. Hurts me in my heart, you know, when I decided to come to this school I told coach Riley, ‘I’m gonna go win you a national championship.’ And I failed to do that.

“And moving forward, you know, I’ve already told them I hope that you guys learn from this. I hope everybody learns from this. And it hurts me the most because usually when you come up short in something, you can come back and you can fix it. I can’t come back and fix it.

This was the fourth-straight year Jalen Hurts reached the College Football Playoff ? Three times with the Alabama Crimson Tide, including as a true freshman back in 2016, and again as a graduate transfer with Oklahoma. From that first loss to Clemson, to getting benched and watching Tua Tagovailoa beat Georgia in the following year’s national championship game, to guiding an SEC Championship comeback to get Alabama and Nick Saban back to the playoff again, Hurts’ legacy in Alabama is unrivaled.

Even after his lone season in Norman, Hurts’ heart proved bigger than any number he put up on the field.

Social media flooded with praise and respect for Jalen after Saturday’s game, and rightfully so. This young man played the game the right way; he was humble, hard-working, and always put his team first. No matter how the Oklahoma Sooners’ season ended or how much critics trash the team’s performance, it’s impossible to criticize Jalen Hurts for the college career he had.

Whatever comes next, Hurts’ time in college football should never be forgotten.