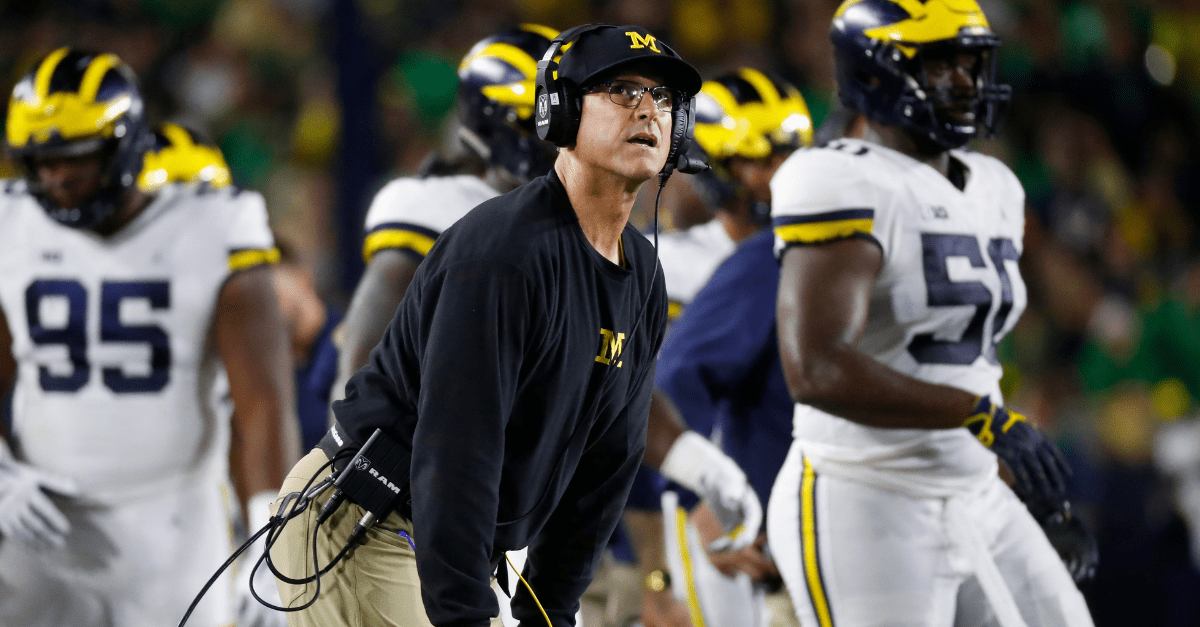 Edwards, now a college football analyst, was suspended indefinitely Monday by the Big Ten Network for “a violation of the network’s social media guidelines.”

I would like to address the tweet from this past Saturday. I should not have attacked Ruiz and Patterson that hard or period individually. I apologize as a former student athlete and NCAA analyst. With that being said UM football still needs to step up so no apologies there.

“I was disappointed that a member of the Big Ten Network would choose to attack the character of two of our players,” said Harbaugh, whose program dropped its 17th consecutive road game to a ranked opponent, a streak dating to 2006.

“If somebody wants to attack the character of anybody on the ball club, come after me.”

On Monday, Harbaugh defended his players, both first-year starters for the Wolverines.

“First of all, it’s not true. It’s not factual,” Harbaugh said. “There’s nobody in our program who thinks those things about any player on our team, let alone the two players that he described. … Just so you know, that’s not coming from anybody inside the program.”

Edwards, one of the top receivers in Michigan history, still holds program records for career receptions (252), yards (3,541) and touchdowns (39).

After learning of his suspension from the Big Ten Network, Edwards fired off another tweet aimed at his alma mater.

“So funny that everyone is worried (about) my tweet as opposed to the real issue, 0-17 on the road against ranked opponents, 1-6 against rivals and the one win was against a 3-9 MSU. Last thing i will ask and really think about this before you get mad…is Michigan better than Iowa?” Edwards wrote Monday.

So funny that everyone is worried my tweet as opposed to the real issue, 0-17 on the road against ranked opponents, 1-6 against rivals and the one win was against a 3-9 MSU. Last thing i will ask and really think about this before you get mad…is Michigan better than Iowa?

He apologized in part later in the day, saying he “should not have attacked Ruiz and Patterson that hard or period individually” but said Michigan “still needs to step up so no apologies there.”

“At the end of the day, we’re college students, we’re college football players and we love what we do,” Gary said Monday. “We take it to heart. For someone to stab at somebody, I didn’t see the tweet, but to take shots at a player and you’re a grown man, I don’t think that’s cool.”

“Coach Harbaugh says it’s just us, all the coaches, all the players,” McKeon said. “Outside noise doesn’t have any effect on what we do. Yeah, I’m frustrated, too. You don’t want to lose ever, but you can’t change that. You just have to learn from it.”

With a long season still ahead, Michigan players are trying to focus on Saturday’s home opener against Western Michigan.

“It’s a new week, we’re still in control of everything we want to accomplish,” Gary said. “Right now, it’s Week 2 and we’re focused on Week 2. We got to get this win and keep it pushing.”