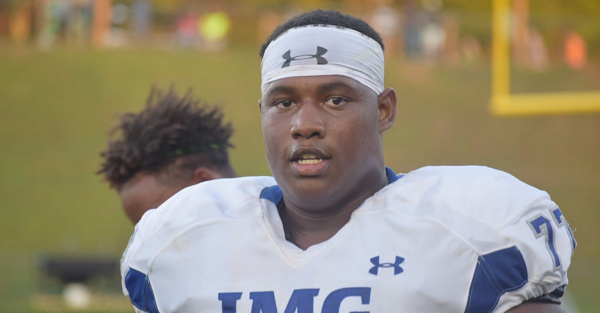 Okay, now this may be unfair.

On the same day that they got 400-pound lineman Daniel Faalele, Minnesota also received the commitment from four-star offensive guard Curtis Dunlap.

Officially committed to be a Golden Gopher !! #RTB #SkiUMah pic.twitter.com/Sx7Ec78Mg6

Dunlap (6-foot-4, 368 pounds, Bradenton, Fla.) and Faalele share another thing in common besides their incredible stature: both are attendees of the IMG Academy in Florida. It appears that Minnesota head coach P.J. Fleck has made quite the impression down in Florida to steal both Faalele and Dunlap away from the school.

Dunlap, the No. 6 ranked guard in the nation, is a former Florida commit, having decommitted just a few days ago amid the coaching changes with the Gators. Florida hired Dan Mullen away from Mississippi State after parting ways with Jim McElwain during the season.

Minnesota is currently ranked 26th in the recruiting rankings at 247Sports. While it’s not a class filled with blue-chippers, it is Minnesota’s highest-ranked class in quite some time, and Fleck isn’t done just yet.