Jim Harbaugh and the Michigan Wolverines turned "The Game" into a blowout this year, obliterating Ohio State 45-23. It was the type of win, especially after last year's thriller in Ann Arbor, which solidified Harbaugh's legacy.

But the scoreboard could have looked very different had one trick play not been completely botched. With about 6 minutes left in the third quarter, Ohio State set up to punt, down 24-20. While the result wound up being a punt and a touchback, the play looked as if it was supposed to be a fake punt, especially based on some of the players' reactions. Even Jim Harbaugh admitted Ohio State "had us cold."

What went off as a punt could've been a huge gain for Ohio State, letting them take the lead (and the momentum). Here's what happened in the play.

What Could've Been: Ohio State's Botched Fake Punt Against Michigan

This came right after Ohio State quarterback C.J. Stroud pleaded to the sideline for his offense to stay on the field on fourth and six. On Ohio State's first punt attempt, the center is flagged for an illegal snap. When Ohio State runs it again, the snap is clearly supposed to go to tight end Mitch Rossi, who has a blocker to the left of him, creating a lane to run for days to the left.

You can see how it's all set up. The snap is supposed to be direct to him: 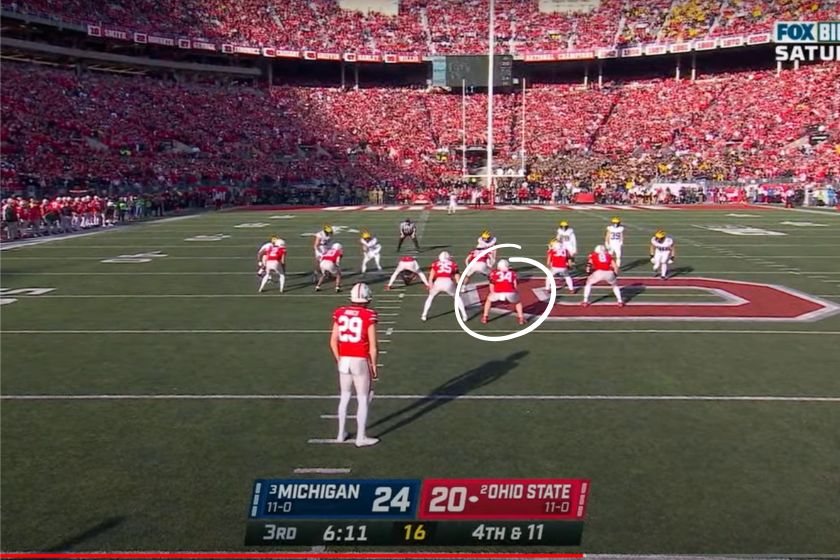 Instead, it's snapped to Ohio State punter Jesse Mirco. The tell that it shouldn't have been snapped to the punter? Three of Michigan's players come off the edge completely undefended. Also, No. 34 looks around, confused, and doesn't block anyone. The punter even takes a stuttering step to his right before coming back to catch the ball as if to say, "Oh, shit." That he even gets the punt off at all is incredible.

Here's the running lane Rossi had and the three players who go unblocked: 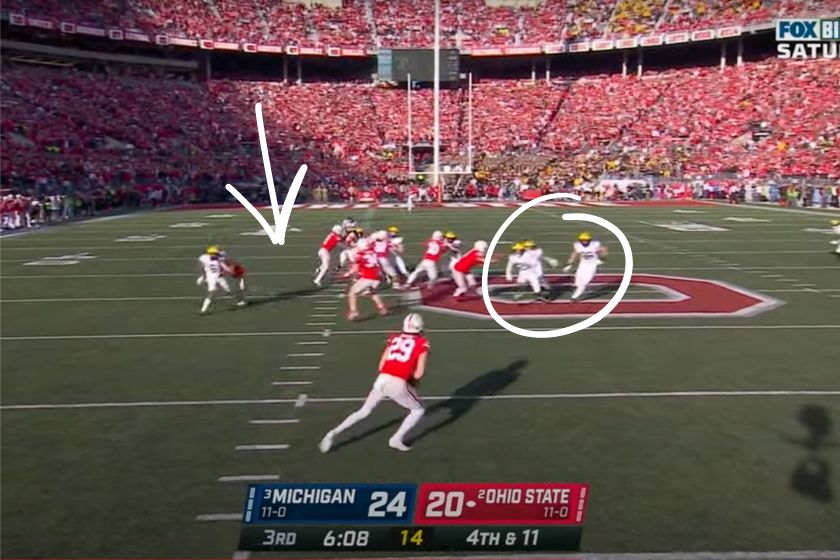 I mean, the left side of the field is WIDE OPEN.

Here is what was supposed to be a fake punt for OSU in 3Q down 24-20 on drive Stroud wanted to go for it. Likely a TD if the long snapper snaps it to Rossi like he?s supposed to. Might have changed the game. Coulda, woulda. Does change my impression of Day?s actions tho. pic.twitter.com/5DvpW1QL5n

While Ohio State head coach Ryan Day hasn't talked about this play, Harbaugh did. What he said was pretty telling that Ohio State completely screwed up this fake punt.

"Nobody on the field saw it, and they had us cold," Harbaugh said on a Big Ten coaches call. "I think their snapper snapped to the wrong guy, snapped it to the punter instead of to the faker, but it would have been a huge gain. We got extremely lucky. They actually were going for it and would have pulled off a big fourth-down conversion."

sooooooooooo ohio state had michigan dead to rights on a fake punt and the long snapper snapped it to the punter instead of the up-man (transcript: @ByAZuniga) pic.twitter.com/bxQlLVeTWg

Two years in a row Michigan completed a goofy looking trick play against Ohio State (last year it was a flea flicker) SMHpic.twitter.com/cuV2jlbpQ1

They scored on the same drive on a J.J. McCarthy rushing touchdown to take a two-score lead and didn't look back after that. Again, what could've been for the Buckeyes? Whatever you do, don't show an Ohio State fan this.