The Penn State Nittany Lions started this season ranked outside the top twenty-five for the first time since 2016.

While the whole team still has a lot to prove, it seems like all eyes are focused on sixth-year senior quarterback Sean Clifford, as they have been for a while now. 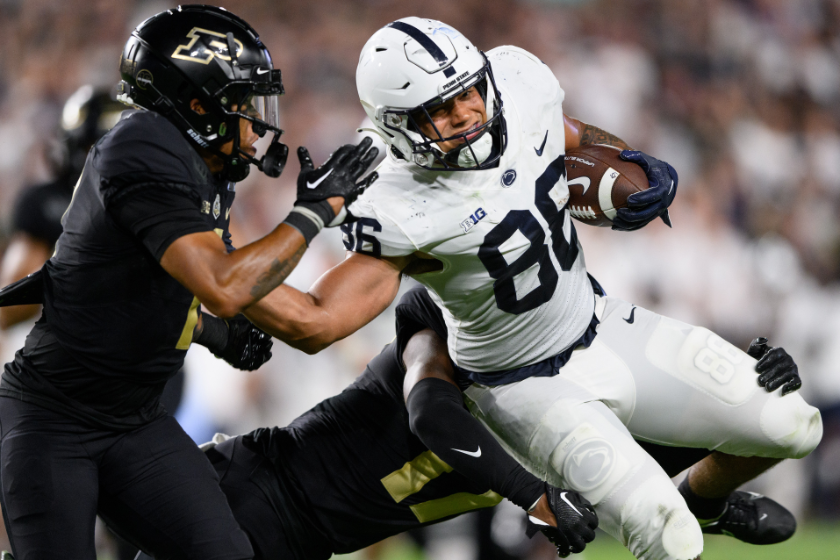 In their first game against Purdue on Thursday night, his experience and confidence were exactly what Penn State needed late in the contest.

In the first half of the game, Penn State showed flashes of dominance. The Nittany Lions were able to score twice in the final two minutes of the half, thanks to a huge play with just seconds left. After a fumble from Purdue, Clifford and the offense found themselves at their 34-yard line with thirty seconds still on the clock. After an incompletion on first and 10, Clifford had to scramble to his right on second down. While still on the run, he motioned to his tight end to keep running down the sideline and was able to deliver a perfect pass. Brenton Strange did the rest, breaking two tackles and going 66 yards for the score.

This gave Penn State all the momentum they could have asked for, and they went into the locker room leading the game 21-10. However, the team did not expect their starting quarterback not to return for the first drive after halftime. Clifford jogged back to the locker room as the Nittany Lion defense took the field in the third quarter, and freshman Drew Allar began to warm up on the sideline. Allar has no experience at the college level yet but was the top high school quarterback last year, and one of the highest-ranked recruits to ever attend Penn State. 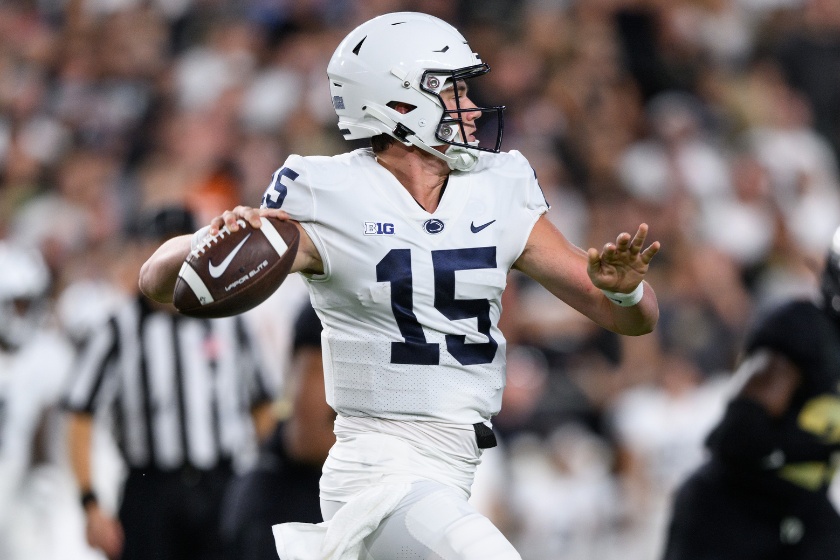 In his one drive as starting quarterback, Allar looked comfortable, and if it weren't for a drop and a miscue, he would have contributed to the lead. Overall, Allar completed two of four passes for 26 yards and was able to pick up two first downs. It was a good sign for fans as the young freshman showed that he might be ready to compete for the job sooner than many thought.

After Allar's one drive, Clifford came back on the field, but it seemed to be a different version than he showed in the first half. In the first half, Clifford completed eight passes for 131 yards and two touchdowns, but he did not complete a single pass on his first drive back. Bad quickly went to worse as Purdue scored twice in the third quarter and shut out Penn State. Going into the fourth quarter the Nittany Lions were trailing 24-21, but the offense answered in a huge way, with a 29-yard touchdown pass to Sophomore wide receiver Keandre Lambert-Smith. Lambert-Smith caught a slant route right around the 25-yard line and looked like he was going to get brought down right away by the Purdue defender. Instead, he was able to spin out of the tackle and sprint away from three more defenders on his way to the end zone, giving Penn State a 28-24 lead.

The Sean Clifford Experience is a Rollercoaster Ride 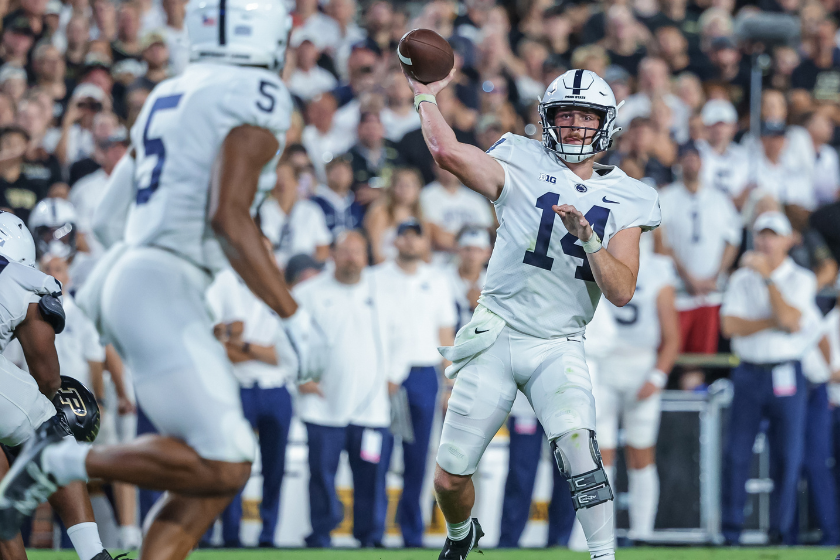 The game was in Penn State's control until a mistake from Clifford nearly cost the Nittany Lions the game. With just over eight and a half minutes left in the fourth quarter, the Penn State offense was right around midfield and threatening to score again. Clifford and his receiver were clearly not on the same page and his first down pass was intercepted and then returned over 70 yards for a Purdue touchdown. Clifford has been making huge mistakes like this all throughout his career, but what Penn State fans are not used to is him making up for it. Trailing 31-28 now, the Penn State offense found themselves in need of a clinical drive with two minutes and 22 seconds left.

Clifford showed why he is one of only two players to be selected as a four-time captain in the program's history, by leading the Nittany Lions' offense right down the field. In one of the biggest drives of his career, he completed six of seven passes, one of which being the game-winning touchdown. In one minute and 25 seconds, in a hostile environment, and dealing with a lingering injury from the first half, Clifford proved that he is good enough to lead this Penn State team on a run this season. He finished the game with 282 passing yards, four passing touchdowns and one rushing touchdown. 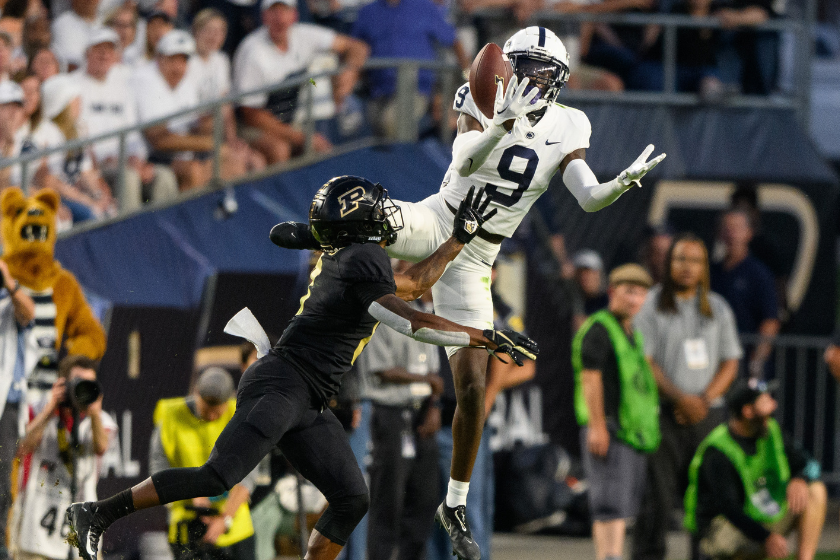 Penn State's defense was able to stop Aidan O'Connell and the Purdue offense on their final drive of the game, leading to a final result of 35-31 in favor of the Nittany Lions. While the defense didn't play as well as many expected, there were plenty of bright spots even though they allowed three offensive touchdowns.

Junior cornerback Joey Porter Jr. and the Penn State secondary had a tough task in front of them with the Purdue passing attack. O'Connell, the Purdue quarterback, completed only half of his passes but threw the ball 58 times on Thursday night, so it is no surprise he totaled over 350 passing yards.

Porter Jr. was a clear star for the Penn State defense and forced a career-high six incompletions. Along with this, he nearly had an interception in the first quarter that bounced off of his hands and somehow landed back into the hands of the receiver. Penn State defensive coordinator Manny Diaz knew that Purdue's offense was going to throw the ball, and his defense was able to do enough to allow the offense to win the game.

The Nittany Lions take the field next Saturday against what should be a much less-intimidating opponent in Ohio University. This will also be Penn State's first home game of the season, and the team is 19-8 at Beaver Stadium since 2018. Ohio won its first game of the season against Florida Atlantic University by a score of 41-38. Both teams will be looking to improve to two wins in this young season, and it will be another opportunity for quarterback Sean Clifford to add to his already impressive totals this season.