Quarterback Bo Nix arrived at Auburn University with big expectations. His father, Patrick Nix, was an Auburn football legend and Bo was named the starting quarterback for the 2019 season opener against Oregon.

Ironically, the team Nix made his college debut against is the team he'll suit up for in 2022. After spending three years as Auburn's starter, Nix joined the Oregon Ducks via the transfer portal after an up and down 2021 that ended with an ankle injury.

Now, Nix has a new team and a new title: husband.

Smoke was a member of the Auburn Tigers cheer squad. It appears she and Bo dated for about a year before he popped the question. Other than dating a starting college football quarterback, Smoke seems to live a normal and cheerful life, according to her social media. She graduated from Auburn this past May.

Shortly after she walked at graduation, she walked down the aisle at a ceremony in Alpine, Alabama to become the newest Mrs. Nix.

The two honeymooned in Cabo San Lucas, Mexico before settling down in Eugene.

Bo is Ready for Fresh Start at Oregon 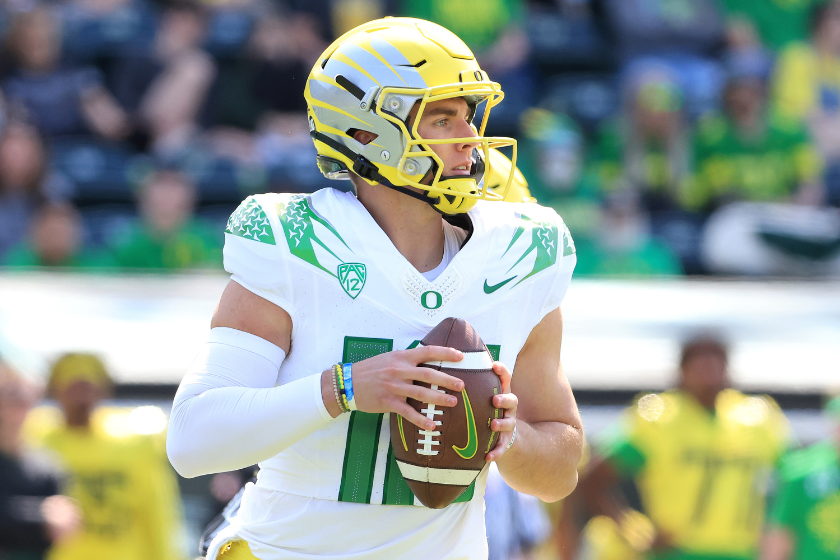 RELATED: These 5 Oregon Ducks are Ready to Get Autzen Stadium Rocking Again in 2022

The American football player was a huge target for former Auburn coach Guz Malzahn out of high school. He was named Alabama Mr. Football and a USA Today All-American as a senior and chose to follow in his dad's college football footsteps.

Nix's ability was evident in leading the Tigers to a comeback win over Oregon in his first game under center. He followed it up with a thrilling Iron Bowl victory over Alabama. His performance was enough to earn the SEC Freshman of the Year in 2019.

Nix threw for 2,415 yards and 12 touchdowns against seven interceptions as a sophomore while Auburn went 6-5 and fired Malzahn. As Malzahn went out, new head coach Bryan Harsin came in from Boise State. However, Harsin and Nix were never able to get on the same page, which played a big part in his decision to transfer.

Again, Nix is entering a new phase in his football career in 2022. This time, he has a new team, a new head coach in Dan Lanning and a new wife.