Over the last year, we've learned the value of having fans in the stands. That's truer about college football than any other sport--college football fans are vital to a game's atmosphere and essential to home-field advantage. In short, on game day, we want soaring noise levels. We want big-time decibels. We crave crowd noise.

Fans take pride in unusual things in the world of college football, and that includes wanting to be included in a list of the loudest college football stadiums. As a result, a college football game has an atmosphere and a noise level you don't tend to find at the NFL level.

Below is our ranking of the 10 loudest stadiums in college football. Don't just think that it is definitely on this list because a stadium is packed with people. Take, for example, "The Big House," AKA Michigan Stadium. The Wolverines can pack them in for a home game, but notoriously that stadium isn't that loud. This is because it wasn't built to keep noise in.

This can also fluctuate due to a team's success. Once upon a time, Nebraska's Memorial Stadium would have made our top 10, but Tom Osborne isn't walking through that door, as they say. Also, this is the rare superlative list in modern college football where Alabama isn't making the cut. Sorry, Bryant-Denny Stadium fans. Consider yourself an honorable mention (and shout out to Virginia Tech's Lane Stadium, which also just barely missed the cut). With that said, let's get to the top 10.

We start with a trip to Madison, where the Wisconsin Badgers play their home games. It's the oldest stadium in the Big 10 and only the fifth biggest, but it's definitely loud. This is mainly between the third and fourth quarters when the loudspeakers bump "Jump Around" by House of Pain and the fans manifest the title's request. 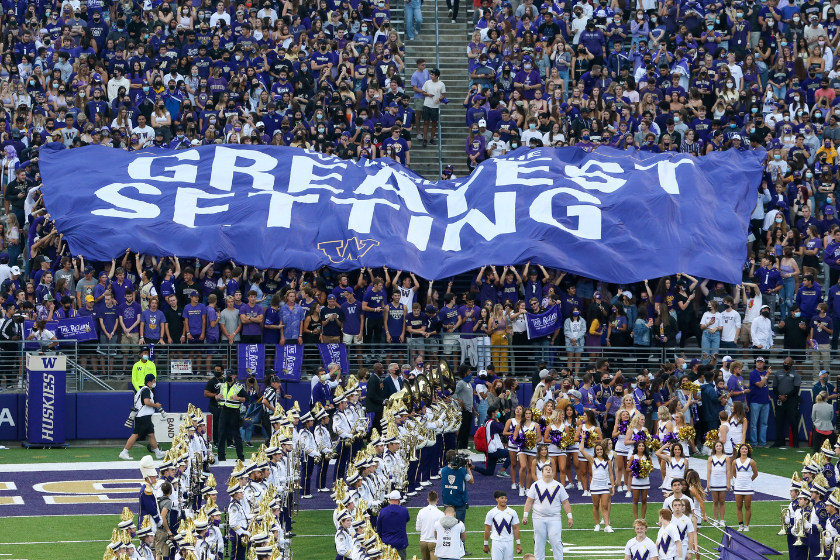 Washington's stadium is built to hold noise in. The bulk of the fans are located under cantilevered roofs that keep in the noise. Back in 1992, ESPN measured Husky Stadium's volume at 133.6 decibels, which was the loudest recorded volume at a college stadium at the time. However, that was a singular moment, and we are talking about overall noise. There have also been renovations since. Still, the Huskies definitely earn a spot on this list.

There are multiple Memorial Stadiums out there, but the one on this list is the one played in by the Clemson Tigers. They call it "Death Valley" for a reason. Clemson has always been loud, but since the Tigers became the kings of the ACC--if not all of college football--under Dabo Swinney, things definitely got louder. It's easy to make noise when you have so much to cheer for, after all. Simply put, Williams-Brice Stadium is not the loudest in South Carolina. 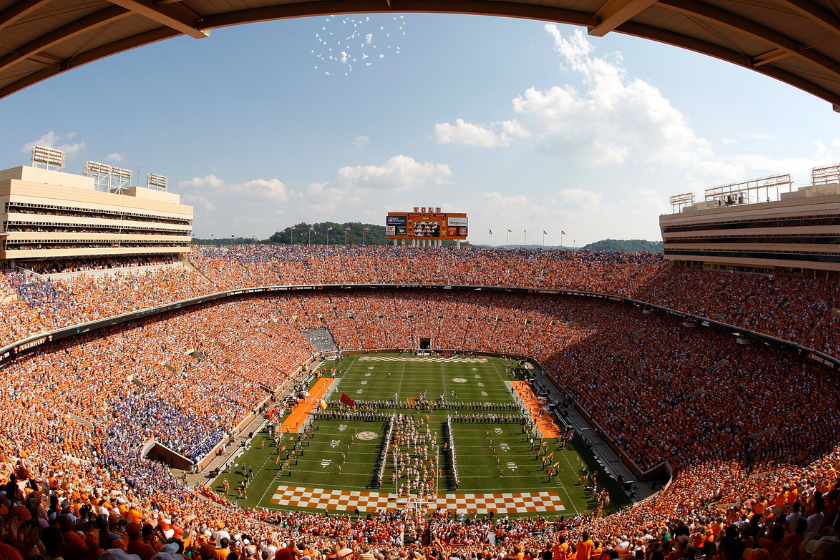 ?If Tennessee doesn't start winning again, Neyland could fall down this list, if not right off it. Still, this is a stadium with over 100,00 seats. It's the fifth-largest stadium in the United States. That makes it easy to generate noise, even though the Vols football team has seen better days. 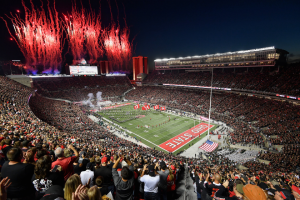 ?Everybody calls it "The Horseshoe," but Ohio State's stadium is deafening no matter what you name it. Back in the day, the Buckeyes could cram over 110,000 people into the stadium, which they did for a big game against the Wolverines. Then, they renovated to add some luxury suites, and now it can only hold a little over 102,000 in terms of seating. When you win as much as the Buckeyes, though, you still get fans being loud as hell, especially for a night game when the team from up north shows up in Columbus. 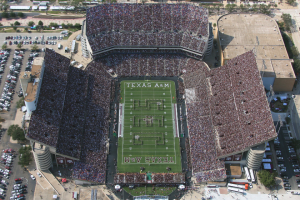 Texas A&M Aggies fans literally have yell practice. As if Texas football fans needed an excuse to make noise. When the Aggies moved to the SEC, they overtook the Volunteers for having the largest seating capacity in the conference. Kyle Field has long been considered one of the most challenging places to play on the road. The noise definitely plays a part in that. 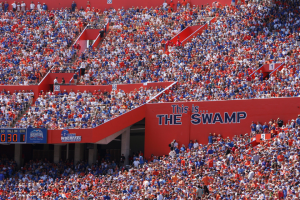 If we say "The Swamp," you know what we're talking about. They don't just call it "The Swamp" because the Florida Gators play there. It's an intimidating place to play with passionate fans who want to get in the heads of the opposing team. The only shame is that the Gators and the Georgia Bulldogs play their rivalry games in Jacksonville, especially since Sanford Stadium is pretty noisy. At least Florida State stops by every other year. 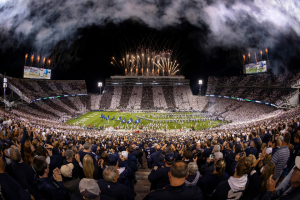 Perhaps counterintuitively, the Penn State Nittany Lions play their home games at Beaver Stadium. So does Oregon State play at Nittany Lion Stadium? Beaver Stadium in Happy Valley is the second-largest stadium in North America, behind "The Big House." There's nothing quite like seeing a "whiteout" in Beaver Stadium, and the fan base has gotten plenty of plaudits from the media as well. 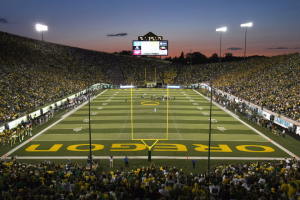 The Oregon Ducks' stadium has the smallest capacity on this list. They rarely exceed even 60,000 people, even with standing-room-only crowds. And yet, ask players from USC, Washington or Oregon State and they will tell you how loud it gets in Autzen. The stadium is compact, with fans super close to the field. The field is also sunken, creating a bubble of noise. Oregon officials literally think about trapping in crowd noise when thinking about expansion. As a result, Ducks fans make more noise on a per-person basis than just about anybody. 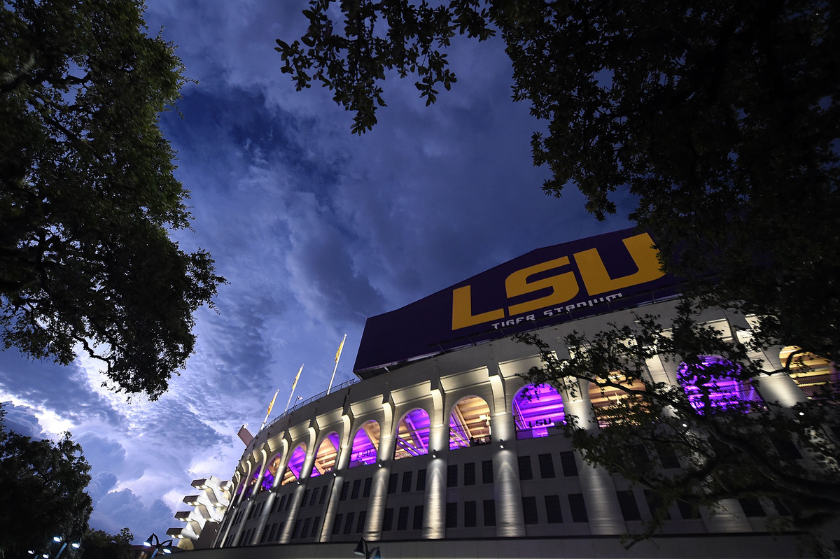 Ultimately, though, we head down to Baton Rouge to put a capper on this list. There's nothing like a night game at LSU. The stadium is up over 100,000 people now, and they make a ton of noise. SEC is football country, and there are some super loud stadiums down there. In addition to the ones on this list, we could shout out the likes of Auburn and South Carolina as well. That being said, no stadium brings the noise like LSU does. That's why it's the true "Death Valley."