The USC Trojans dynasty of the early 2000s should never be forgotten. No matter how many wins the NCAA took away, it will forever be one of the greatest runs in college football history. They were so much fun to watch, with a roster flooded with NFL talent, and nearly impossible to beat.

Perhaps nothing proved USC's winning culture more than a rivalry showdown on October 15, 2005 in South Bend, Indiana. The Trojans -- equipped with superstars such as quarterback Matt Leinart and running backs Reggie Bush and Lendale White -- were ranked No. 1 in the country entering a tough road game against the No. 9 Notre Dame Fighting Irish at Notre Dame Stadium.

The top-10 matchup had all of the hype. ESPN's College GameDay was on hand, USC and head coach Pete Carroll was putting their 27-game winning streak on the line, and Notre Dame was looking for a monumental upset under first-year coach Charlie Weis. There was even a pep rally broadcast on ESPN that featured Fighting Irish legends like Joe Montana.

"It was like playing a big playoff game. That's what it felt like the whole week leading up to it. We normally did pep rallies that had about 10,000 to 12,000 [at the Joyce Center]," Weis said, via The Los Angeles Times.

"We showed up for the pep rally that Friday night and there were 50,000 people [at Notre Dame Stadium]. ... I played into that and brought in all the heavyweights, Joe Montana and all the guys from Notre Dame history."

It came down to the final seconds, the last play of the game, and the moment known today as the "The Bush Push" was born.

RELATED: The 7 Greatest College Football Teams Ever Are All-Time Juggernauts

The USC Trojans knew all about pressure. Coming off two-straight national championships and starting the 2005 season 5-0 meant they knew how to handle it, too.

So what if Notre Dame fans were going to be loud? So what if quarterback Brady Quinn, wide receiver Jeff Samardzija, tight end Anthony Fasano, safety Tom Zbikowski, and the Fighting Irish were playing lights out? So what if the whole country would be watching on NBC? None of that mattered.

The game was no cakewalk, though. Notre Dame came to play and even led 21-14 at halftime. The Fighting Irish even picked off Matt Leinart twice and took the lead again on a field goal early in the fourth quarter.

Then, the rest of the football game became chaotic.

With a little over five minutes to play in the second half, Reggie Bush scored a nine-yard touchdown, his third of the night. Quinn responded with a touchdown run of his own to take the lead and gave USC a little over two minutes to march down and win the game.

The final drive is part of what made USC so special. On fourth down with 1 minute, 14 seconds remaining, Leinart connected with star wide receiver Dwayne Jarrett for a 61-yard gain -- USC was in business. After an incomplete pass, two handoffs to Bush went for another six and five yards, respectively.

The Trojans didn't want to tie. They wanted the win. On 1st-and-Goal from the two-yard line, Leinart raced out to the pylon, but Notre Dame linebacker Corey Mays made him fumble out of bounds. The debate has raged on for years where the ball went out of bounds on the sideline, but the referees placed it at the one-yard line and put seven seconds on the clock after it had run out.

That set the stage for the game-winning touchdown by Leinart, who got a nice, huge shove by Bush into the end zone to spoil the upset bid by Notre Dame football. That play was illegal by the nature of the NCAA rules and is forever known as "The Bush Push."

Why Was the Bush Push Illegal? 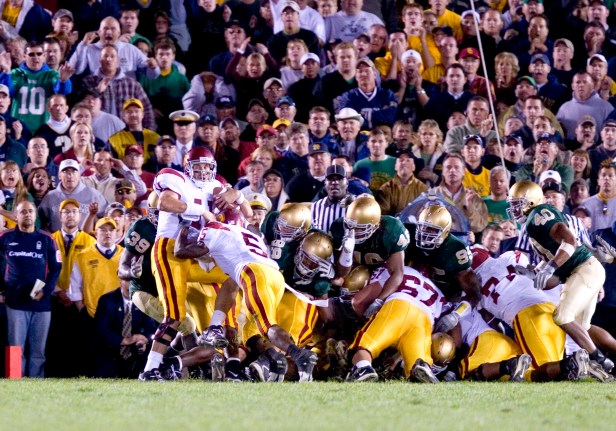 At the time, the NCAA's rules stated Bush's actions weren't allowed. As the Los Angeles Times noted back then, the rulebook said "the runner shall not grasp a teammate; and no other player of his team shall grasp, push, lift or charge into him to assist him in forward progress."

The NCAA changed that rule in 2014 to allow for teammates to push their teammates forward. The action is now legal in both college football and NFL.

Still, the controversial play made for a spectacular ending to an even better game.

"I did the Flutie game," NBC broadcaster Pat Haden told ESPN. "That game and the Notre Dame-USC game were probably the two most exciting ones."

The rest is history. The Trojans won the Pac-10 (now the Pac-12) Championship, and the dynasty run came to an end with a loss to the Texas Longhorns at the Rose Bowl. That national championship is considered one of the greatest games of all time.

Years later, the NCAA declared Bush ineligible. USC had to vacate multiple wins, including the national title against Oklahoma and the Notre Dame thriller, and Bush returned his Heisman Trophy.

That's all in the past, though. Bush's 10-year ban officially ended on June 10, 2020. Right now, many fans are going down memory lane and watching how special and electric the All-American truly was.

Whatever you do, though, don't forget about "The Bush Push" that kept USC's magical run alive.