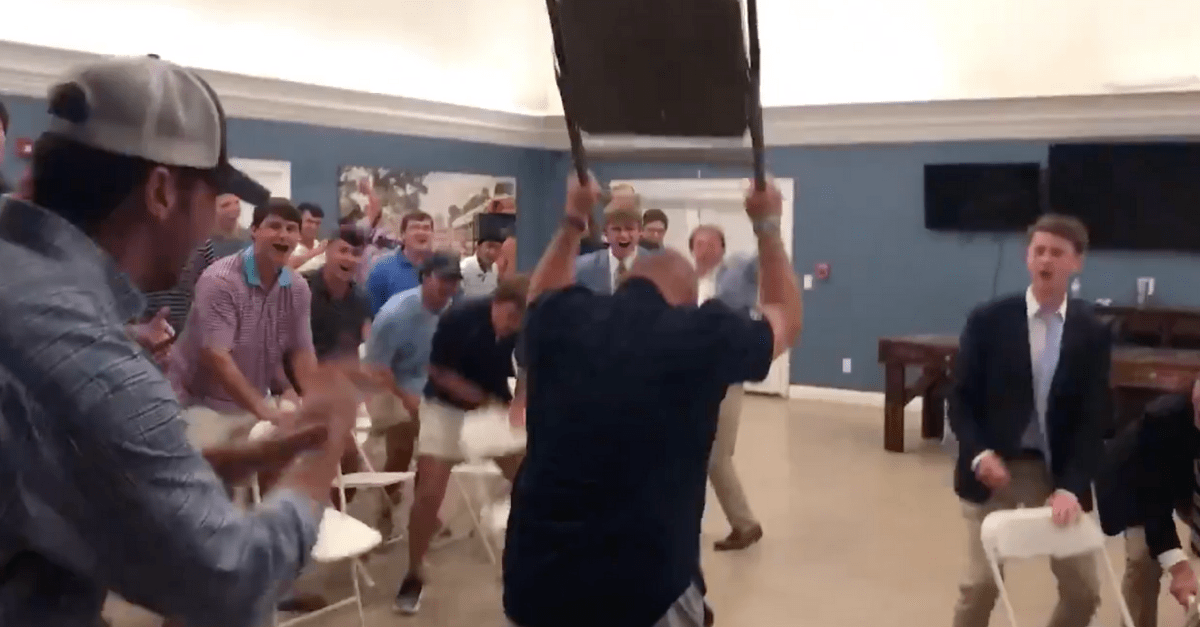 The debate is officially over. When it comes to football right now, nobody is doing it better than the state of Georgia. High school coaches are rewarding syrup shots for pancake blocks, prep players are trucking defenders for crazy 90-yard touchdowns, the No. 2 Georgia Bulldogs are dismantling opponents, and the Georgia Southern head coach is making fraternity visits to hype students up for this weekend’s game.

The last one is definitely some next-level stuff. Before Chad Lunsford even made it to the back room at the Eta Zeta Sigma Chi fraternity house, things were already crazy. It got even wilder when the 41-year-old second-year coach picked up a metal chair and smacked it a few times on the ground.

Then, Lunsford pointed at a student to pick up the same chair and smash it on the ground.

It didn’t stop with the Eagles coach or the one fraternity member. Two more members took shots at throwing the chair, with the final guy slamming it hard before giving it the People’s Elbow, a famous move from former WWE superstar The Rock.

More cheers, pandemonium, and a double high-five from Lunsford to the kid were definitely in order at the house in Statesboro, Georgia.

The Georgia Southern Eagles, a program with six national titles at the FCS level and current members of the Sun Belt Conference in the Football Bowl Subdivision, will host Arkansas State at Paulson Stadium on Saturday, and this is the way coach Chad Lunsford wanted to pump up the students.

The Eagles are 2-1 this season with wins over South Carolina and UMass at home before getting rocked at No. 3 Clemson.

This is a big game, one Georgia Southern is a three-point underdog in, but things might be different if the football coach is this fired up and the players bring the same energy and intensity the Sigma Chi fraternity did when they slammed chairs during the coach’s visit.

Some noise from Eagle nation would be helpful, too.

READ MORE: At Alabama State, He Will Soon Be Known As Doctor Coach