If you want a good college football rivalry, look no further than down the road or the next state over. Generally, the most heated rivalries stem from proximity.

Ohio State and Michigan, Auburn and Alabama, Texas and Oklahoma, Oregon and Washington. You get the picture. These rivalries, along with several others, are a battle for regional dominance.

There is one major college football rivalry, however, that nearly reaches across the country. Yes, we're talking Notre Dame and USC, AKA the battle for the Jeweled Shillelagh.

The Irish and Trojans' rivalry is embedded in college football lore, but what reason do these cross country schools have to hate each other? Well its origins can be traced back to a snowy Thanksgiving conversation in Lincoln, Nebraska.

The "Conversation of the Wives": How Notre Dame & USC Became Rivals 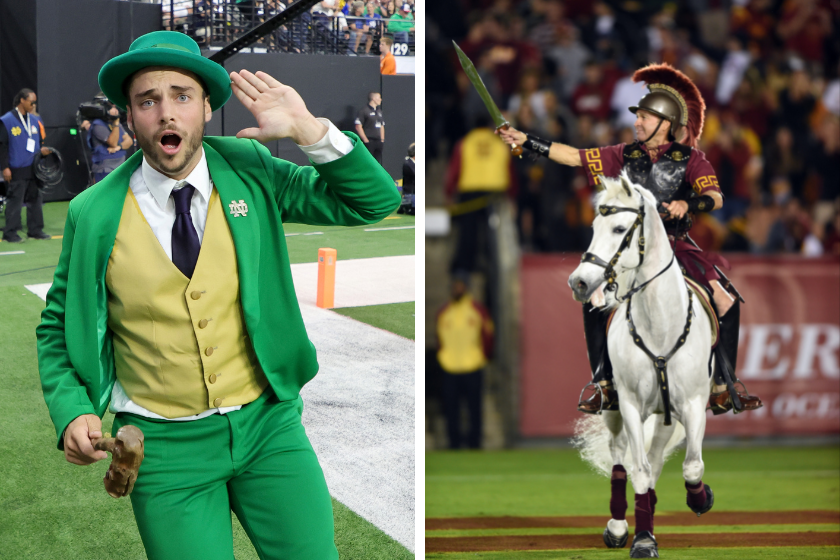 Back in 1925, Notre Dame was in Lincoln to play the Nebraska Cornhuskers to put a cap on the college football season. The Irish and Huskers were a fixture on each other's schedules in those days, having played every year since 1915. Meanwhile, USC, which was on the hunt for a national rival, made the trip to Nebraska to try to convince Notre Dame to set up an annual series.

USC athletic director Gwynn Wilson couldn't persuade Notre Dame athletic director Knute Rockne because of Rockne's concern about the long trip. But Wilson's wife Marion had better luck. She directed Bonnie, Rockne's wife, to look outside and said: "Hey, look at this cold and snowy weather. Wouldn't a trip to Southern California every other year be more pleasant than this?"

Now, I don't know how Marion was able to close the deal since Lincoln in the winter is known as the "Miami of the Midwest." Regardless, Marion's words struck a chord. Bonnie discussed the pros of traveling to the West Coast with her husband, and the rivalry was booked eight days later.

However, there are a few question marks. The "official" origin of the rivalry is unknown, but the "conversation of the wives" is commonly referenced as the beginning. One other possibility is the relationship Rockne, who was also Notre Dame's head football coach, had with Iowa coach Howard Jones. USC tried to poach Rockne after the Irish won the national title in 1924, but Rockne turned it down and recommended Jones. The two allegedly arranged the rivalry after Jones accepted the USC job. Another possibility is the Western Conference (now the Big Ten) banned its members from playing Notre Dame, thus forcing them to find opponents wherever they could.

I, however, choose to believe the "conversation of the wives." Forget proximity, history, and all that jazz; Notre Dame and USC's rivalry began because Notre Dame's athletic department wanted a winter trip to sunny Southern California.