Have You Ever Seen Someone Dribble a Football Like This? 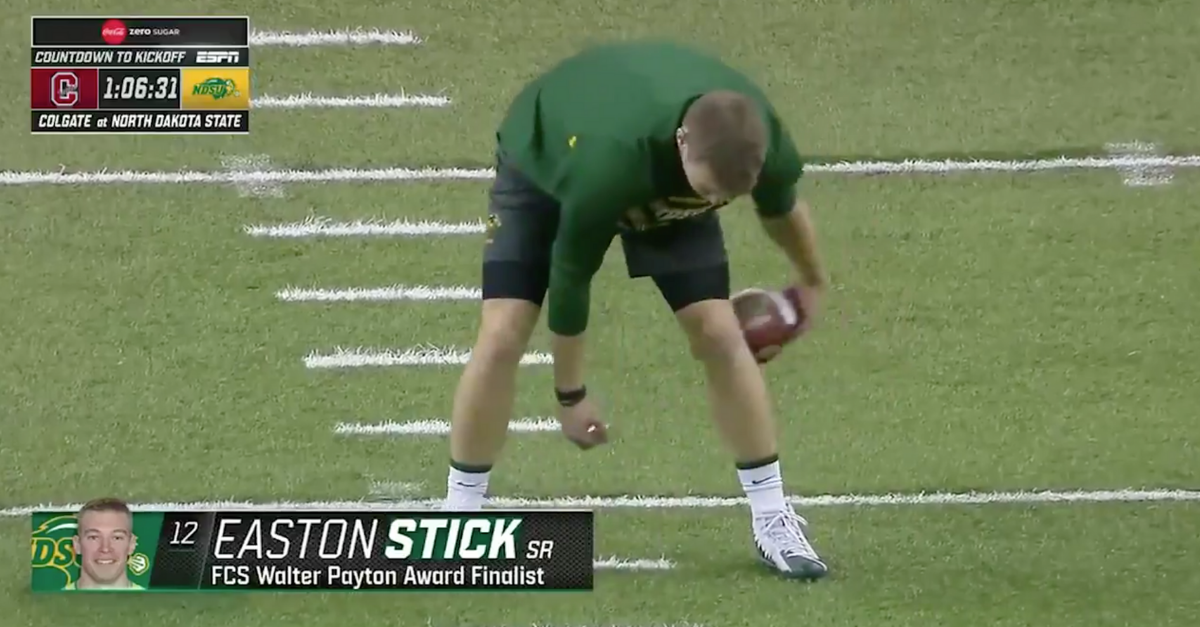 Before North Dakota State senior quarterback Easton Stick gashed the Colgate Raiders, where he completed 14 of 19 passes for 205 yards with three touchdowns in an easy 35-0 victory in the FCS Championship quarterfinals, the college football star had a little fun showing off his handles.

Although his bio for the FCS powerhouse doesn’t mention he ever played basketball at the high school level, with baseball and track and field being his specialties outside of football, the 6-foot-2 signal caller from Creighton Prep in Omaha, Nebraska knows how dribble a football better than most know how to dribble a basketball and cross up defenders.

Seriously, have you ever seen someone dribble a football this well, being able to even go between his legs a couple of times? It’s not exactly common practice, but it’s his pregame routine and the ESPN cameras caught it and posted it to social media.

A quarterback serving crossovers on the gridiron 👀 pic.twitter.com/YMY7OGb6OM

RELATED: The 7 Coolest NBA Pregame Rituals Nobody Should Ever Forget

As a basketball fan, it would be interesting to see just how long he could dribble the football for, but it’s not overly important. It’s just cool to watch the Bison star do his thing.

It definitely caught the attention of Jim Nagy, the Executive Director of the Reese’s Senior Bowl.

Been around football my entire life and can’t say I’ve ever seen this. pic.twitter.com/AGiH2fcm9m

After replacing current Philadelphia Eagles starting quarterback Carson Wentz at NDSU, Stick has been as dominant as any quarterback at the FCS level under head coach Chris Klieman.

In 2017, Stick was the CFPA FCS National Performer of the Year and the NCAA Division I Championship Game Most Outstanding Player, throwing for 2,466 yards with 28 touchdowns while adding 663 rushing yards and 12 scores.

Stick has followed it up this season with 2,385 passing yards with 25 touchdown passes and 11 more rushing touchdowns with likely two games to play. He is a finalist for the FCS Walter Payton Award.

The quest for another national championship is in full gear right now, and it’s safe to assume there will be a video of Easton Stick dribbling a football before each game until the end of the season.