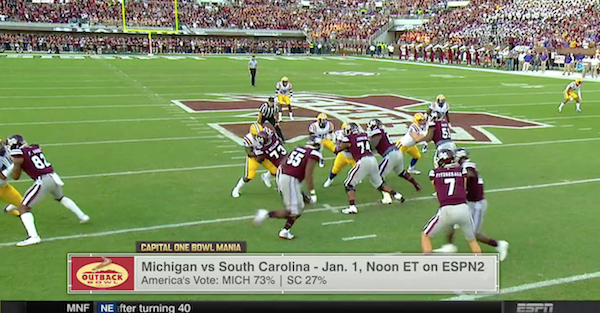 There are 39 bowl games on the schedule for this college football postseason, and it’s hard for fans to remember who plays who and when they’re supposed to play.

One analyst even said Mississippi State’s running game, specifically running back Aeris Williams, will be a challenge for Michigan’s defense. You can’t make this stuff up.

ESPN just had a breakdown of Mississippi State playing in the Outback Bowl against Michigan. One problem? South Carolina is in it. https://t.co/9ZSNQ0jPQi

The weird thing is that they actually got the graphic right for the game. It says Michigan vs. South Carolina, but they show highlights of Mississippi State. Oddly enough, the game is actually on ESPN. You’d think they’d get that one right.

Perhaps next time, ESPN should do a little more research before they devote time to a segment breaking down a game that doesn’t exist.