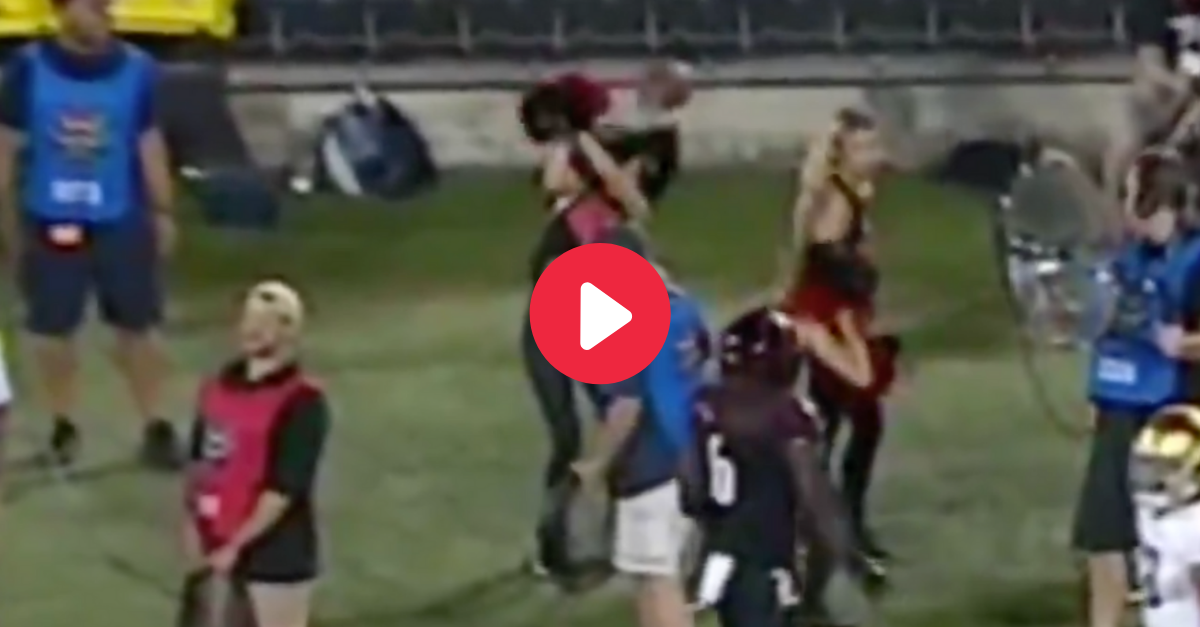 The Notre Dame Fighting Irish were far from perfect that Monday night, but head coach Brian Kelly?s team did enough to earn a victory against the Louisville Cardinals. That includes quarterback Ian Book, who put up some nice stats and somehow found a way to injure someone on the opposing sideline.

During the fourth quarter on Labor Day, Book dropped back to pass, but he was quickly pressured. So like any responsible quarterback would do, the Notre Dame football player threw it away.

The pass sailed out of bounds, which was good, but it unfortunately hit Louisville cheerleader Elizabeth Scott right in the face.

What a way to put an exclamation point on the opening week of the 2019 NCAA college football season, huh? There?s no way that would feel good.

As it turns out, the errant throw actually broke Scott?s nose. The Louisville Ladybird dance team member took to social media to thank Ian Book and update everyone on what happened.

“Thank u Ian book,” she wrote on her Twitter page, @Elizabethsc0tt.

I'm not even a cheerleader I'm a dancer smh

Me throwing my poms down and walking away after I got hit tonight pic.twitter.com/ViwnQaj5AU

In other words, this is exactly what happened to Marsha Brady in The Brady Bunch Movie when Peter threw a wild pass over Greg?s head and drilled her right in the nose. The only difference is Cardinals cheerleader Elizabeth Scott had pom-poms to cover her nose.

Everything worked out for Marsha, of course. She still went to the dance and got to meet Davy Jones. It?s probably safe to say things will be quite alright for Elizabeth Scott after this, too. After all, she?s had quite the sense of humor since the broken nose incident.

Notre Dame quarterback Ian Book finished the season opener with 193 passing yards and a touchdown while also adding 81 rushing yards and another score to help the Fighting Irish win 35-17 on the road. And there?s no doubt this was the most viral and trending incomplete pass he?s ever had in his life.

It?s a damn good story for both parties to tell, too.

This post was originally published on September 3, 2019 before updating.