When you think of the greatest college football teams of all time, the 2001 Miami Hurricanes are undoubtedly at or near the top of the list. Rightfully, so. "The U" had as talented a roster the sport has ever seen, producing 38 (!) NFL Draft picks, including 17 first rounders.

The man in charge of the operation was Larry Coker. Coker cemented himself in college football lore by leading the '01 'Canes, but his life after Coral Gables was unorthodox. Once on top of the college football world, Coker decided to build UTSA's football program from the ground up.

How did he get there? More importantly, where is the longtime college football coach now? 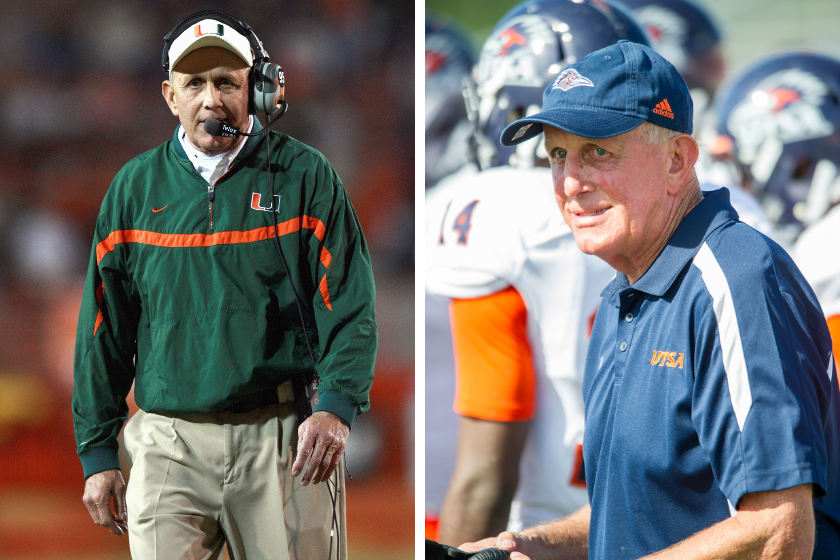 Larry Coker grew up in Okemah, Oklahoma and played defensive back at Division II Northeastern State. He started his coaching career at the high school football ranks around Oklahoma before Tulsa hired him as their running backs and quarterbacks coach in 1979. From there, Coker served as an assistant coach at Oklahoma State, Oklahoma and Ohio State until Miami head coach Butch Davis brought him on to be his offensive coordinator in 1995.

Coker spent five years planning Miami's offensive scheme, and when Davis left to take the Cleveland Browns job, he was promoted to head coach. Coker inherited a young roster that went 11-1 in 2000 and won the Sugar Bowl over Florida. Entering 2001, the Hurricanes had a national title on their mind. They prevailed with style. The 'Canes went 12-0 and capped their national championship season with a Rose Bowl win over Nebraska, cementing one of the greatest first seasons as a head coach in any sport.

The next year, Miami looked to repeat and entered the 2003 Fiesta Bowl against Ohio State 11-0. Despite being double-digit underdogs, the Buckeyes shocked the defending champs with a 31-24 win in overtime.

Coker's tenure at Miami started going downhill when Davis' players began to leave. He racked up 29 wins from 2003 to 2005, but his 7-6 record and a clear decline is what ultimately cost him his job.

The former Miami head coach waited three years for his next opportunity -- an opportunity that required him to build a Division I program from scratch. The University of Texas at San Antonio hired Coker to kickstart their brand new team in 2009. He coached the inaugural team in 2011 and spent five years at the program, going 26-32, before resigning in January 2016.

What is Larry Coker Up to Now?

This is a great opportunity for young coaches. #AFCA https://t.co/OyDLBFHi1V

Coker's Miami legacy has become more appreciated over time after the program's struggles following his departure. He was inducted into the Miami Sports Hall of Fame in 2018.

The UTSA Roadrunners have also shown appreciation for their first head football coach. In 2020, the university started the Larry Coker First Head Football Coach Endowned Award. The fund is meant to recognize Coker's contributions to the program and recipients are preferably football players who began their careers as a walk-on.

These days, Coker seems to be enjoying the retired life. He has a semi-active Twitter account and makes sure to shoutout his former players and peers for their accomplishments -- like when his former Miami quarterback Ken Dorsey was hired as the Buffalo Bills offensive coordinator this past offseason.

Congratulations @kendorsey11. I know you will do a great job. https://t.co/1ImnDnJKGw

Larry Coker has one of the most unique careers in college football, but he certainly has a place in history.