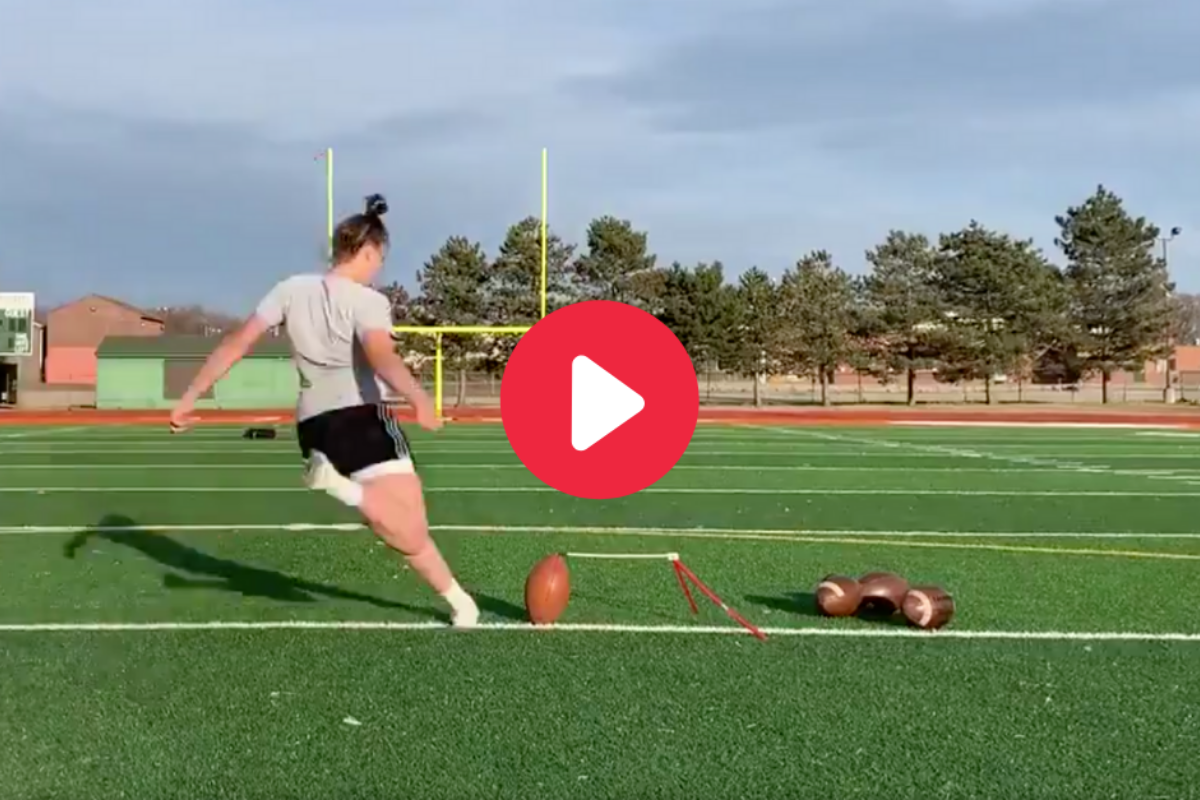 Madison Barch is a superstar in the making. As a Utica High School senior, she did it all. Score points for her basketball team? Absolutely. Play goalie for the soccer team? Definitely. Kick game-winning field goals on the football team? You better believe it. And she’s just getting started.

Barch signed to play college football at Kalamazoo College in Michigan, where she was perfect on PAT attempts this season. The former high school kicker and punter is proving that girls belong on the college gridiron, too.

“She does an excellent job in both,” Utica coach Matt Marulli told the Detroit Free Press. “If we want to do an onside kick, she puts in a perfect spot. Pooch or a squib, very reliable there, too. (Utica recovered three kicks last season.) She’s a great weapon on punts because she can direct the ball anywhere she wants it to go.”

One feat, however, caught the internet’s eye and might be her most impressive yet.

Madison Barch, a 5-foot-10 and 180-pound specialist, loves football. She’s been playing since seventh grade after convincing her parents to let her do it. Yet, it wasn’t until the Ray Guy Kicking Camp in California that put her on the map. She was then just one of three players — and the first female ever — invited to the Top Prospect Camp in Nashville.

During her senior football season, Barch went 6-for-7 on field goals and 15-for-17 on extra points. She connected on two 36-yard field goals and even nailed a 32-yard game-winner against Bloomfield Hills, according to the Detroit Free Press.

I’m excited to announce I will be continuing my academic and football career for the next 4 years at Kalamazoo College!! Thank you to @CoachZorboKZOO and @WhoisCoachJones for this amazing opportunity!! GO HORNETS🧡🐝🖤#SwarmTheDay @UticaHighFB pic.twitter.com/GEaOprb8WO

But 55 yards? With a nasty crosswind? That’s some next-level kicking, even if it was on an empty practice field.

“I remember last summer Carli Lloyd from the U.S. national (soccer) team went to an (Philadephia) Eagles practice and hit a 55-yarder,” Barch said. “There were rumors going around that she might actually sign with an NFL team. It just made me think, ‘Wow, if I work for it, the dream I have is possible.'”

Barch will have her chance to prove her skills, both with kicking and punting. And if this viral video is any indication, we will be hearing a lot more about her in the years to come.

This article was originally published March 10, 2020.