The Pac-12 has had a rough past few months. First, USC and UCLA announced they were ditching the conference to join the Big Ten in 2024. Now, the West-Coast league has ruined their chances of making the College Football Playoff.

And it has no one to blame but itself.

The Pac-12's Cannibalization of Itself 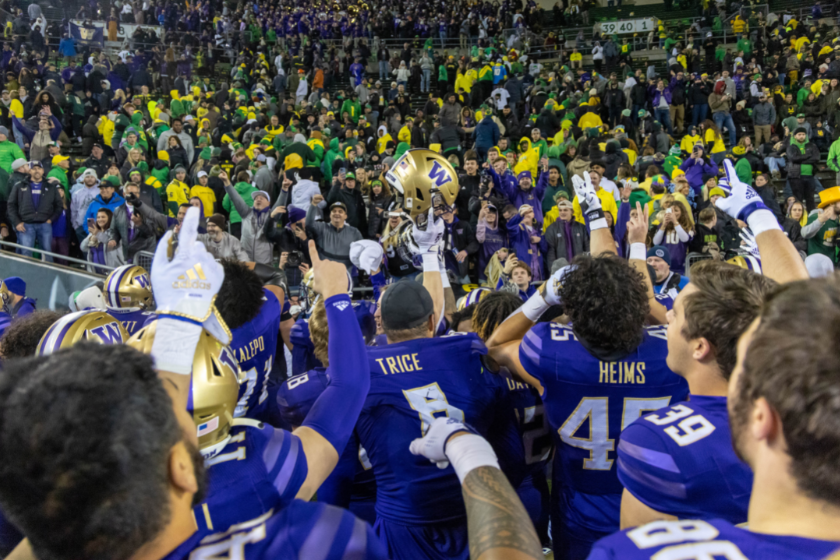 Don't let anyone fool you, East Coast bias is definitely real in college football. It's been a thing since the beginning of the sport, and unless there's a dynasty like USC in the early aughts or Oregon under Chip Kelly, the teams out west are left by the wayside.

For that reason, the Pac-12 has done what it can to conquer its uphill battle. "Pac-12 After Dark" is dandy for any gambler looking to throw one final Hail Mary for the day, but the surefire way it can climb out of the depths of irrelevance is by having a member make the College Football Playoff.

The only problem? The Pac-12 is prone to friendly fire.

Entering last Saturday, Oregon was ranked No. 6 in the College Football Playoff Rankings while USC was No. 8, and UCLA and Utah were No. 12 and No. 13, respectively. Oregon, of course, would've had a strong case to crack the top four -- if they won out. Alas, they lost to arch-rival Washington in the Border War.

Great win if you're a fan of the Huskies, but Pac-12 Commissioner George Kliavkoff had to be pulling out his hair in San Francisco. UW's win effectively ended the conference's shot at a playoff berth.

You see, Oregon's two losses put them out of the picture, but it also hurts USC because the Trojans would've had the opportunity to strengthen their case by beating a one-loss Oregon team in the Pac-12 Championship Game. They're still likely to meet, but if USC won now, it's not as impressive a victory to the committee.

Georgia and Ohio State are near locks to make the CFP, while the third spot will likely go to Tennessee or Michigan. That leaves the fourth to either Michigan, Tennessee, TCU or LSU, who currently have better resumes than USC and still have time to beef them up.

That leaves USC in no man's land -- a spot Pac-12 teams know all too well.

The conference has only made the CFP twice -- Oregon in 2014 and Washington in 2016. To put it in perspective, the SEC has 10 appearances, the ACC has eight, the Big Ten has six and the Big 12 has four.

An extra comedy wrinkle in all this is Washington's win over Oregon; and Arizona's win over UCLA mean every Pac-12 team has transitively beaten one another. Reddit user U/Angel_City aptly named it the "Circle of Suck."

Anyway, the Pac-12 can't get out of their own way when it comes to making the College Football Playoff. The question has to be asked: Is it time to kick Washington out of the conference??