In the Pac-12, there's a rivalry that's far from the oldest or most played in college football history. But what the clash between the USC Trojans and UCLA Bruins may lack in history makes up for with an abundance of something better: pranks.

Even the most diehard of fans out west know of the Victory Bell the two teams play for each season, but they may not know the story of how it came to be more than 80 years ago. Back then, no jokes were off limits, and the bell all but started an all-out prank war between these two student bodies.

When USC Stole the Victory Bell

Rivalry trophies are super common every November. There are platypus trophies, iron skillets, boots, old brass spittoons, and whatever the hell a jeweled shillelagh is on the line. The winning team usually keeps these for a whole season.

The same is said for the Victory Bell, the 295-pound bell that USC and UCLA play for. It originally sat atop a Southern Pacific Railroad car. The bell was a gift in 1939 from the UCLA Alumni Association and UCLA cheerleaders and students would ring the bell after any point was scored. They did this for two seasons before it the object was bell-napped.

During UCLA's 1941 season opener against Washington State, a group of USC students made their way into the UCLA student section. After the game, the Trojans pulled off their own opposite Trojan Horse move. The plan? To steal the bell.

"After the game, they helped Bruin students load the bell onto a waiting truck bound for Westwood. But then, one Trojan quietly removed the key to the truck, and while the Bruins went to get a replacement, the Trojans drove off with the bell," reads an article on USC's website.

The Trojan students kept the bell hidden for more than a year. It collected dust in a fraternity basement. It was shipped off to Hollywood Hills and Santa Ana. It even was buried in a haystack.

UCLA students were pissed, but they forgot about the incident--until a USC magazine called "The Wampus" ran a photo of it. The war was on. USC's Tommy Trojan statue was defaced. USC students would burn their school letters into UCLA lawns. UCLA students even threatened to kidnap USC's student body president. According to USC, the school's president at the time, Dr. Rufus B. von KleinSmid, had to threaten to cancel the rivalry game to get the two schools to stop.

It wasn't until 1942 that the two student body presidents came to an agreement. That's when it was determined the winner of the annual matchup would hold on to the Victory Bell for the next year. USC paid $150 for half of the bell. Since then, it's been passed back and forth and painted each team's colors numerous times.

The Prank War Didn't Stop There 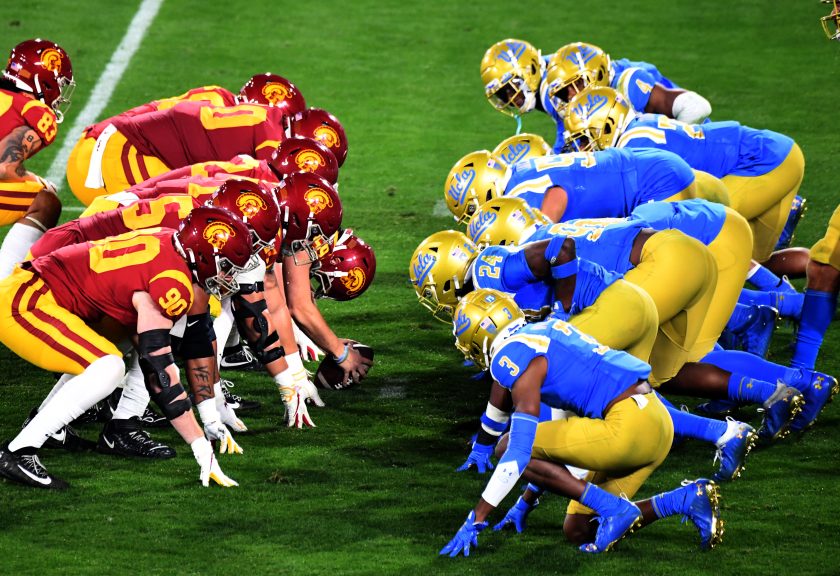 These two teams are rivals, and college kids are as petty and immature as they come, especially after a few beers. So naturally, the animosity continued through the years.  According to a Daily Bruin article from 2000 and an article from the Los Angeles Times, here's just a short list of some of the incidents:

USC's mascot, a dog named George Tirebiter, was kidnapped. He was returned before kickoff with "UCLA" shaved into his fur.

It might not be ethical, or even legal, but none of that matters when it comes to college football rivalries.