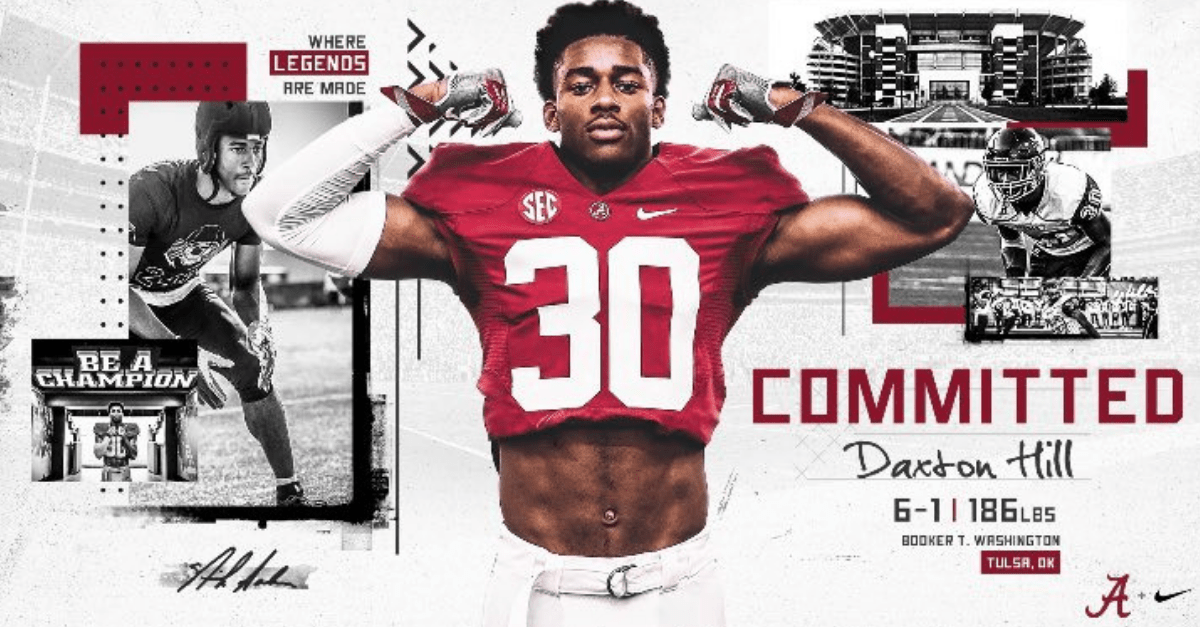 It’s not like we’re ever surprised to hear when the Alabama Crimson Tide, home of some of the best players in college football, flip an elite recruit as the NCAA’s Early Signing Period approaches in late December, but this is getting ridiculous.

Just two weeks after landing four-star linebacker Christian Harris, who had previously committed to Texas A&M before flipping to Alabama, the Crimson Tide and head coach Nick Saban added their second five-star player for 2019, and this one takes over as the top-overall prospect coming to Tuscaloosa next year.

Five-star safety Daxton Hill, rated by 247Sports as the top high school player in Oklahoma and the best safety of the 2019 recruiting class, announced Saturday night on Twitter his intentions to de-commit from the Michigan Wolverines and play college football for the Crimson Tide.

College football’s top-ranked recruiting class just got even stronger, and Hill will add to the long line of elite defensive backs to wear the crimson and white in 2019.

Hill, selected as a 2019 U.S. Army All-American, helped lead Booker T. Washington High School to the Class 6A Division II semifinals this season. Hill accumulated 93 tackles, including nine for a loss, and two forced fumbles for the Hornets as a senior. He added 13 receptions for 360 yards and seven touchdowns as a wide receiver.

During his junior year in 2017, Hill led Washington to a 12-1 record and brought the Oklahoma State Championship back home to Tulsa.

As Nick Saban adds yet another top player, Jim Harbaugh’s Michigan football program lost their only five-star recruit heading into next season, though they’re still bringing in a group that’s ranked as the 11th-best in all of college football.

From Rashad Johnson to Mark Barron to Ha-Ha Clinton-Dix to Landon Collins to Minkah Fitzpatrick, and now with Deionte Thompson patrolling the back end of Alabama’s defense, the Crimson Tide have established themselves as “Safety-U” in Tuscaloosa.

Good luck trying to keep pace with this juggernaut, because they just added one of the best high school players in the country in Dax Hill, but then again, are you really surprised?

READ MORE: Alabama Landed the No. 1 Inside Linebacker in the Nation for 2018